Tarquinii (Etruscan
Etruscan language
The Etruscan language was spoken and written by the Etruscan civilization, in what is present-day Italy, in the ancient region of Etruria and in parts of Lombardy, Veneto, and Emilia-Romagna...
Tarchnal) is said to have been already a flourishing city when Demaratus of Corinth brought in Greek workmen. It was the chief of the twelve cities of Etruria
Etruscan cities
Etruscan cities flourished over most of Italy during the Roman Iron Age, marking the farthest extent of Etruscan civilization. They were gradually assimilated first by Italics in the south, then by Celts in the north and finally in Etruria itself by the growing Roman Republic.That many Roman cities...
.

In 509 BC, after the overthrow of the Roman monarchy, the family of Tarquinius Superbus went into exile in Caere
Caere
Caere is the Latin name given by the Romans to one of the larger cities of Southern Etruria, the modern Cerveteri, approximately 50-60 kilometres north-northwest of Rome. To the Etruscans it was known as Cisra and to the Greeks as Agylla...
in Etruria. Tarquin sought to regain the throne, at first by the Tarquinian conspiracy
Tarquinian conspiracy
The Tarquinian conspiracy was a conspiracy amongst a number of senators and leading men of ancient Rome in 509 BC to reinstate the monarchy, and to put Lucius Tarquinius Superbus back on the throne. The conspirators were discovered and executed...
and, when that failed, by force of arms. He convinced the cities of Tarquinii and Veii
Veii
Veii was, in ancient times, an important Etrurian city NNW of Rome, Italy; its site lies in Isola Farnese, a village of Municipio XX, an administrative subdivision of the comune of Rome in the Province of Rome...
to support him, and led their armies against Rome in the Battle of Silva Arsia
Battle of Silva Arsia
The Battle of Silva Arsia was a battle in 509 BC between the republican forces of ancient Rome on the one hand, and Etruscan forces of Tarquinii and Veii led by the deposed Roman king Lucius Tarquinius Superbus on the other...
. Although the Roman army was victorious, it is recorded by Livy
Livy
Titus Livius — known as Livy in English — was a Roman historian who wrote a monumental history of Rome and the Roman people. Ab Urbe Condita Libri, "Chapters from the Foundation of the City," covering the period from the earliest legends of Rome well before the traditional foundation in 753 BC...
that the forces of Tarquinii fought well on the right wing, initially pushing back the Roman left wing. After the battle the forces of Tarquinii returned home. 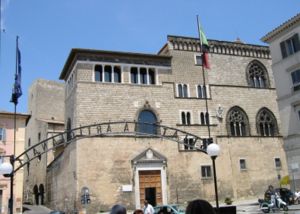 The original site of the Etruscan city of Tarquinia, known as the "Civita", is on the long plateau to the north of the current town. The two coexisted for most of the early Middle Ages, with Tarquinia dwindling to a small fortified settlement on the "Castellina" location, and the more strategically placed Corneto (possibly the "Corito" mentioned in Roman sources) growing progressively to become the major city of the lower Maremma sea coast, especially after the destruction of the port of Centumcellae (modern Civitavecchia). The last historic references to Tarquinia are from around 1250, while the name of Corneto was changed to Tarquinia in 1922. Reversion to historical place names (not always accurately), was a frequent phenomenon under the Fascist Government of Italy as part of the nationalist campaign to evoke past glories. 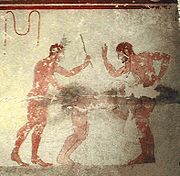 The Italian wine DOC of Tarquinia produces red, white frizzante style wine. The grapes are limited to a harvest
Harvest (wine)
The harvesting of wine grapes is one of the most crucial steps in the process of winemaking. The time of harvest is determined primarily by the ripeness of the grape as measured by sugar, acid and tannin levels with winemakers basing their decision to pick based on the style of wine they wish to...
yield of 12 tonnes/ha with finished wines needing a minimum 10.5% alcohol level. The reds are a blend of at least 60% Sangiovese
Sangiovese
Sangiovese is a red Italian wine grape variety whose name derives from the Latin sanguis Jovis, "the blood of Jove"...
and/or Montepulciano
Montepulciano (grape)
Montepulciano is a red Italian wine grape variety that is most noted for being the primary grape behind the Denominazione di Origine Controllata e Garantita wine Montepulciano d'Abruzzo Colline Teramane and the Denominazione di origine controllata wines of Rosso Conero and Rosso Piceno.It should...
, up to 25% Cesanese and up to 30% of other local red grape varieties. The whites are composed of at least 50% Trebbiano
Trebbiano
Trebbiano is the second most widely planted grape in the world. It gives good yields, but makes undistinguished wine at best. It can be fresh and fruity, but does not keep long. Its high acidity makes it important in Cognac production...
and/or Giallo, up to 35% Malvasia
Malvasia
Malvasia is a group of wine grape varieties grown historically in the Mediterranean region, Balearic islands, Canary Islands and the island of Madeira, but now grown in many of the winemaking regions of the world...
and up to 30 other local grape varieties with the exception of Pinot grigio that is specifically excluded from the DOC wines of Tarquinia.