A nut is a type of hardware
Hardware
Hardware is a general term for equipment such as keys, locks, hinges, latches, handles, wire, chains, plumbing supplies, tools, utensils, cutlery and machine parts. Household hardware is typically sold in hardware stores....
fastener
Fastener
A fastener is a hardware device that mechanically joins or affixes two or more objects together.Fasteners can also be used to close a container such as a bag, a box, or an envelope; or they may involve keeping together the sides of an opening of flexible material, attaching a lid to a container,...
with a threaded
Screw thread
A screw thread, often shortened to thread, is a helical structure used to convert between rotational and linear movement or force. A screw thread is a ridge wrapped around a cylinder or cone in the form of a helix, with the former being called a straight thread and the latter called a tapered thread...
hole. Nuts are almost always used opposite a mating bolt to fasten a stack of parts together. The two partners are kept together by a combination of their threads' friction, a slight stretch of the bolt, and compression of the parts. In applications where vibration or rotation may work a nut loose, various locking mechanisms may be employed: Adhesives, safety pins or lockwire, nylon inserts, or slightly oval-shaped threads. The most common shape is hexagonal, for similar reasons as the bolt head - 6 sides give a good granularity of angles for a tool to approach from (good in tight spots), but more (and smaller) corners would be vulnerable to being rounded off. Other specialized shapes exist for certain needs, such as wing nuts for finger adjustment and captive nuts for inaccessible areas. 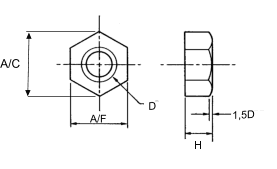 
Use of two nuts to prevent self-loosening

In normal use, a nut-and-bolt joint holds together because the bolt is under a constant tensile stress called the preload. The preload pulls the nut threads against the bolt threads, and the nut face against the bearing surface, with a constant force
Force
In physics, a force is any influence that causes an object to undergo a change in speed, a change in direction, or a change in shape. In other words, a force is that which can cause an object with mass to change its velocity , i.e., to accelerate, or which can cause a flexible object to deform...
, so that the nut cannot rotate without overcoming the friction
Friction
Friction is the force resisting the relative motion of solid surfaces, fluid layers, and/or material elements sliding against each other. There are several types of friction:...
between these surfaces. If the joint is subjected to vibration
Vibration
Vibration refers to mechanical oscillations about an equilibrium point. The oscillations may be periodic such as the motion of a pendulum or random such as the movement of a tire on a gravel road.Vibration is occasionally "desirable"...
, however, the preload increases and decreases with each cycle of movement. If the minimum preload during the vibration cycle is not enough to hold the nut firmly in contact with the bolt and the bearing surface, then the nut is likely to become loose.

Specialist locking nuts exist to prevent this problem, but sometimes it is sufficient to add a second nut. For this technique to be reliable, each nut must be tightened to the correct torque
Torque
Torque, moment or moment of force , is the tendency of a force to rotate an object about an axis, fulcrum, or pivot. Just as a force is a push or a pull, a torque can be thought of as a twist....
. The inner nut is tightened to about a quarter to a half of the torque of the outer nut. It is then held in place by a wrench
Wrench
A wrench or spanner is a tool used to provide grip and mechanical advantage in applying torque to turn objects—usually rotary fasteners, such as nuts and bolts—or keep them from turning....
while the outer nut is tightened on top using the full torque. This arrangement causes the two nuts to push on each other, creating a tensile stress in the short section of the bolt that lies between them. Even when the main joint is vibrated, the stress between the two nuts remains constant, thus holding the nut threads in constant contact with the bolt threads and preventing self-loosening. When the joint is assembled correctly, the outer nut bears the full tension of the joint. The inner nut functions merely to add a small additional force to the outer nut and does not need to be as strong, so a thin nut (also called a jam nut) can be used.