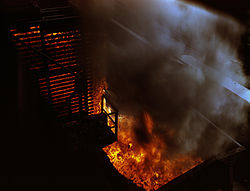 In materials science
Materials science
Materials science is an interdisciplinary field applying the properties of matter to various areas of science and engineering. This scientific field investigates the relationship between the structure of materials at atomic or molecular scales and their macroscopic properties. It incorporates...
, quenching is the rapid cooling
Cooling
Cooling is the transfer of thermal energy via thermal radiation, heat conduction or convection. It may also refer to:-Techniques:* Air conditioning* Air cooling* Computer cooling* Cryogenics* Conduction * Infrared solar cells* Laser cooling...
of a workpiece to obtain certain material properties. It prevents low-temperature processes, such as phase
Phase (matter)
In the physical sciences, a phase is a region of space , throughout which all physical properties of a material are essentially uniform. Examples of physical properties include density, index of refraction, and chemical composition...
transformations, from occurring by only providing a narrow window of time in which the reaction is both thermodynamically favorable and kinetically accessible. For instance, it can reduce crystallinity
Crystallinity
Crystallinity refers to the degree of structural order in a solid. In a crystal, the atoms or molecules are arranged in a regular, periodic manner. The degree of crystallinity has a big influence on hardness, density, transparency and diffusion. In a gas, the relative positions of the atoms or...
and thereby increase toughness of both alloy
Alloy
An alloy is a mixture or metallic solid solution composed of two or more elements. Complete solid solution alloys give single solid phase microstructure, while partial solutions give two or more phases that may or may not be homogeneous in distribution, depending on thermal history...
s and plastic
Plastic
A plastic material is any of a wide range of synthetic or semi-synthetic organic solids used in the manufacture of industrial products. Plastics are typically polymers of high molecular mass, and may contain other substances to improve performance and/or reduce production costs...
s (produced through polymerization
Polymerization
In polymer chemistry, polymerization is a process of reacting monomer molecules together in a chemical reaction to form three-dimensional networks or polymer chains...
).

In metallurgy
Metallurgy
Metallurgy is a domain of materials science that studies the physical and chemical behavior of metallic elements, their intermetallic compounds, and their mixtures, which are called alloys. It is also the technology of metals: the way in which science is applied to their practical use...
, it is most commonly used to harden steel
Steel
Steel is an alloy that consists mostly of iron and has a carbon content between 0.2% and 2.1% by weight, depending on the grade. Carbon is the most common alloying material for iron, but various other alloying elements are used, such as manganese, chromium, vanadium, and tungsten...
by introducing martensite
Martensite
Martensite, named after the German metallurgist Adolf Martens , most commonly refers to a very hard form of steel crystalline structure, but it can also refer to any crystal structure that is formed by displacive transformation. It includes a class of hard minerals occurring as lath- or...
, in which case the steel must be rapidly cooled through its eutectoid point, the temperature at which austenite
Austenite
Austenite, also known as gamma phase iron, is a metallic non-magnetic allotrope of iron or a solid solution of iron, with an alloying element. In plain-carbon steel, austenite exists above the critical eutectoid temperature of ; other alloys of steel have different eutectoid temperatures...
becomes unstable. In steel alloyed with metals such as nickel
Nickel
Nickel is a chemical element with the chemical symbol Ni and atomic number 28. It is a silvery-white lustrous metal with a slight golden tinge. Nickel belongs to the transition metals and is hard and ductile...
and manganese
Manganese
Manganese is a chemical element, designated by the symbol Mn. It has the atomic number 25. It is found as a free element in nature , and in many minerals...
, the eutectoid temperature becomes much lower, but the kinetic barriers to phase transformation remain the same. This allows quenching to start at a lower temperature, making the process much easier. High speed steel
High speed steel
High speed steelMost copyeditors today would tend to choose to style the unit adjective high-speed with a hyphen, rendering the full term as high-speed steel, and this styling is not uncommon . However, it is true that in the metalworking industries the styling high speed steel is long-established...
also has added tungsten
Tungsten
Tungsten , also known as wolfram , is a chemical element with the chemical symbol W and atomic number 74.A hard, rare metal under standard conditions when uncombined, tungsten is found naturally on Earth only in chemical compounds. It was identified as a new element in 1781, and first isolated as...
, which serves to raise kinetic barriers and give the illusion that the material has been cooled more rapidly than it really has. Even cooling such alloys slowly in air has most of the desired effects of quenching.

Extremely rapid cooling can prevent the formation of all crystal structure, resulting in amorphous metal
Amorphous metal
An amorphous metal is a metallic material with a disordered atomic-scale structure. In contrast to most metals, which are crystalline and therefore have a highly ordered arrangement of atoms, amorphous alloys are non-crystalline...
or "metallic glass".

Quench hardening is a mechanical process in which steel and cast iron alloys are strengthened and hardened. These metals consist of ferrous metals and alloys. This is done by heating the material to a certain temperature, dependent upon material, and then rapidly cooling the material. This produces a harder material by either surface hardening or through-hardening varying on the rate at which the material is cooled. The material is then often tempered
Tempering
Tempering is a heat treatment technique for metals, alloys and glass. In steels, tempering is done to "toughen" the metal by transforming brittle martensite or bainite into a combination of ferrite and cementite or sometimes Tempered martensite...
to reduce the brittleness that may increase from the quench hardening process. Items that may be quenched include gears, shafts, and wear blocks.

Quenching metals is a progression; the first step is soaking the metal, i.e. heating it to the required temperature. Soaking can be done by air (air furnace), or a bath. The soaking time in air furnaces should be 1 to 2 minutes for each millimeter of cross-section. For a bath the time can range a little higher. The recommended time allotment in salt or lead baths is 0 to 6 minutes. Uneven heating or overheating should be avoided at all cost. Most materials are heated from anywhere to 815 to 900 °C (1,499 to 1,652 F).

The next item on the progression list is the cooling of the part. Water is one of the most efficient quenching media where maximum hardness is acquired, but there is a small chance that it may cause distortion and tiny cracking. When hardness can be sacrificed, whale, cottonseed and mineral oils are used. These often tend to oxidize and form a sludge, which consequently lowers the efficiency. The quenching velocity (cooling rate) of oil is much less than water. Intermediate rates between water and oil can be obtained with water containing 10-30% Ucon, a substance with an inverse solubility which therefore deposits on the object to slow the rate of cooling.

Before the material is hardened, the microstructure of the material is a pearlite grain structure that is uniform and laminar. Pearlite
Pearlite
Pearlite is often said to be a two-phased, lamellar structure composed of alternating layers of alpha-ferrite and cementite that occurs in some steels and cast irons...
is a mixture of ferrite
Ferrite (iron)
Ferrite or alpha iron is a materials science term for iron, or a solid solution with iron as the main constituent, with a body centred cubic crystal structure. It is the component which gives steel and cast iron their magnetic properties, and is the classic example of a ferromagnetic material...
and cementite
Cementite
Cementite, also known as iron carbide, is a chemical compound of iron and carbon, with the formula Fe3C . By weight, it is 6.67% carbon and 93.3% iron. It has an orthorhombic crystal structure. It is a hard, brittle material, normally classified as a ceramic in its pure form, though it is more...
formed when steel or cast iron are manufactured and cooled at a slow rate. After quench hardening, the microstructure of the material form into martensite as a fine, needle-like grain structure.

Before using this technique it is essential to look up the rate constants for the quenching of the excited states of metal ions.

There are three types of furnaces that are commonly used in quench hardening: salt bath furnace, continuous furnace, and box furnace. Each is used depending on what other processes or types of quench hardening are being done on the different materials.

When quenching, there are numerous types of media. Some of the more common include: air, brine (salt water), oil and water. These media are used to increase the severity of the quench.
The source of this article is wikipedia, the free encyclopedia.  The text of this article is licensed under the GFDL.