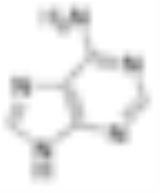 
Nucleosides are glycosylamine
Glycosylamine
Glycosylamine is a class of biochemical compounds consisting of an amine with a β-N-glycosidic bond to a carbohydrate, thus forming a cyclic hemiaminal ether bond .Examples include nucleosides such as adenosine....
s consisting of a nucleobase
Nucleobase
Nucleobases are a group of nitrogen-based molecules that are required to form nucleotides, the basic building blocks of DNA and RNA. Nucleobases provide the molecular structure necessary for the hydrogen bonding of complementary DNA and RNA strands, and are key components in the formation of stable...
(often referred to as simply base) bound to a ribose
Ribose
Ribose is an organic compound with the formula C5H10O5; specifically, a monosaccharide with linear form H––4–H, which has all the hydroxyl groups on the same side in the Fischer projection....
or deoxyribose
Deoxyribose
Deoxyribose, more, precisely 2-deoxyribose, is a monosaccharide with idealized formula H---3-H. Its name indicates that it is a deoxy sugar, meaning that it is derived from the sugar ribose by loss of an oxygen atom...
sugar
Sugar
Sugar is a class of edible crystalline carbohydrates, mainly sucrose, lactose, and fructose, characterized by a sweet flavor.Sucrose in its refined form primarily comes from sugar cane and sugar beet...
via a beta
Anomer
In carbohydrate chemistry, an anomer is a special type of epimer. It is one of two stereoisomers of a cyclic saccharide that differs only in its configuration at the hemiacetal or hemiketal carbon, also called the anomeric carbon. Anomerization is the process of conversion of one anomer to the other...
-glycosidic linkage
Glycosidic bond
In chemistry, a glycosidic bond is a type of covalent bond that joins a carbohydrate molecule to another group, which may or may not be another carbohydrate....
. Examples of nucleosides include cytidine
Cytidine
Cytidine is a nucleoside molecule that is formed when cytosine is attached to a ribose ring via a β-N1-glycosidic bond...
, uridine
Uridine
Uridine is a molecule that is formed when uracil is attached to a ribose ring via a β-N1-glycosidic bond.If uracil is attached to a deoxyribose ring, it is known as a deoxyuridine....
, adenosine, guanosine
Guanosine
Guanosine is a purine nucleoside comprising guanine attached to a ribose ring via a β-N9-glycosidic bond. Guanosine can be phosphorylated to become guanosine monophosphate , cyclic guanosine monophosphate , guanosine diphosphate , and guanosine triphosphate...
, thymidine
Thymidine
Thymidine is a chemical compound, more precisely a pyrimidine deoxynucleoside. Deoxythymidine is the DNA nucleoside T, which pairs with deoxyadenosine in double-stranded DNA...
and inosine
Inosine
Inosine is a nucleoside that is formed when hypoxanthine is attached to a ribose ring via a β-N9-glycosidic bond....
.

Nucleosides can be phosphorylated
Phosphorylation
Phosphorylation is the addition of a phosphate group to a protein or other organic molecule. Phosphorylation activates or deactivates many protein enzymes....
by specific kinase
Kinase
In chemistry and biochemistry, a kinase is a type of enzyme that transfers phosphate groups from high-energy donor molecules, such as ATP, to specific substrates, a process referred to as phosphorylation. Kinases are part of the larger family of phosphotransferases...
s in the cell on the sugar's primary alcohol group (-CH2-OH), producing nucleotide
Nucleotide
Nucleotides are molecules that, when joined together, make up the structural units of RNA and DNA. In addition, nucleotides participate in cellular signaling , and are incorporated into important cofactors of enzymatic reactions...
s, which are the molecular building-blocks of DNA
DNA
Deoxyribonucleic acid is a nucleic acid that contains the genetic instructions used in the development and functioning of all known living organisms . The DNA segments that carry this genetic information are called genes, but other DNA sequences have structural purposes, or are involved in...
and RNA
RNA
Ribonucleic acid , or RNA, is one of the three major macromolecules that are essential for all known forms of life....
.

Nucleosides can be produced by de novo synthesis
De novo synthesis
De novo synthesis refers to the synthesis of complex molecules from simple molecules such as sugars or amino acids, as opposed to their being recycled after partial degradation. For example, nucleotides are not needed in the diet as they can be constructed from small precursor molecules such as...
pathways, in particular in the liver, but they are more abundantly supplied via ingestion and digestion of nucleic acids in the diet, whereby nucleotidase
Nucleotidase
A nucleotidase is a hydrolytic enzyme that catalyzes the hydrolysis of a nucleotide into a nucleoside and a phosphate. For example, they convert adenosine monophosphate to adenosine, and guanosine monophosphate to guanosine....
s break down nucleotide
Nucleotide
Nucleotides are molecules that, when joined together, make up the structural units of RNA and DNA. In addition, nucleotides participate in cellular signaling , and are incorporated into important cofactors of enzymatic reactions...
s (such as the thymidine monophosphate
Thymidine monophosphate
Thymidine monophosphate, also known as 5'-thymidylate, thymidylate, or TMP, is a nucleotide that is used as a monomer in DNA. It is an ester of phosphoric acid with the nucleoside thymidine. TMP consists of a phosphate group, the pentose sugar deoxyribose, and the nucleobase thymine...
) into nucleosides (such as thymidine
Thymidine
Thymidine is a chemical compound, more precisely a pyrimidine deoxynucleoside. Deoxythymidine is the DNA nucleoside T, which pairs with deoxyadenosine in double-stranded DNA...
) and phosphate. The nucleosides, in turn, are subsequently broken down:


In addition, nucleotides can be broken down:

Use in medicine and technology

In medicine several nucleoside analogues
Nucleoside analogues
Nucleoside analogues are a range of antiviral products used to prevent viral replication in infected cells. The most commonly used is Acyclovir, although its inclusion in this category is uncertain, as it contains only a partial nucleoside structure, as the sugar ring is replaced by an open-chain...
are used as antiviral or anticancer agents. The viral polymerase incorporates these compounds with non-canonical bases. These compounds are activated in the cells by being converted into nucleotides, they are administered as nucleosides since charged nucleotides cannot easily cross cell membranes.

In molecular biology, several analogues
Nucleic acid analogues
Nucleic acid analogues are compounds structurally similar to naturally occurring RNA and DNA, used in medicine and in molecular biology research....
of the sugar backbone exist. Due to the low stability of RNA, which is prone to hydrolysis, several more stable alternative nucleoside/nucleotide analogues that correctly bind to RNA are used. This is achieved by using a different backbone sugar. These analogues include LNA
Locked nucleic acid
A locked nucleic acid , often referred to as inaccessible RNA, is a modified RNA nucleotide. The ribose moiety of an LNA nucleotide is modified with an extra bridge connecting the 2' oxygen and 4' carbon. The bridge "locks" the ribose in the 3'-endo conformation, which is often found in the A-form...
, morpholino
Morpholino
In molecular biology, a Morpholino is a molecule in a particular structural family that is used to modify gene expression. Morpholino oligomers are an antisense technology used to block access of other molecules to specific sequences within nucleic acid...
, PNA.

In sequencing, dideoxynucleotides are used. These nucleotides possess the non-canon sugar dideoxyribose, which lacks 3' hydroxyl group (which accepts the phosphate) and therefore cannot bond with the next base, terminating the chain, as DNA polymerases cannot distinguish between it and a regular deoxyribonucleotide.