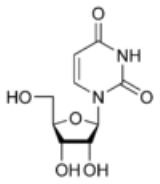 Encyclopedia
Uridine is a molecule that is formed when uracil
Uracil
Uracil is one of the four nucleobases in the nucleic acid of RNA that are represented by the letters A, G, C and U. The others are adenine, cytosine, and guanine. In RNA, uracil binds to adenine via two hydrogen bonds. In DNA, the uracil nucleobase is replaced by thymine.Uracil is a common and...
is attached to a ribose
Ribose
Ribose is an organic compound with the formula C5H10O5; specifically, a monosaccharide with linear form H––4–H, which has all the hydroxyl groups on the same side in the Fischer projection....
ring (also known as a ribofuranose) via a β-N1-glycosidic bond
Glycosidic bond
In chemistry, a glycosidic bond is a type of covalent bond that joins a carbohydrate molecule to another group, which may or may not be another carbohydrate....
.

If uracil
Uracil
Uracil is one of the four nucleobases in the nucleic acid of RNA that are represented by the letters A, G, C and U. The others are adenine, cytosine, and guanine. In RNA, uracil binds to adenine via two hydrogen bonds. In DNA, the uracil nucleobase is replaced by thymine.Uracil is a common and...
is attached to a deoxyribose
Deoxyribose
Deoxyribose, more, precisely 2-deoxyribose, is a monosaccharide with idealized formula H---3-H. Its name indicates that it is a deoxy sugar, meaning that it is derived from the sugar ribose by loss of an oxygen atom...
ring, it is known as a deoxyuridine
Deoxyuridine
Deoxyuridine is a compound and a nucleoside. It is similar in chemical structure to uridine, but without the 2'-hydroxyl group.Idoxuridine and Trifluridine are variants of deoxyuridine used as antiviral drugs...
.

Uridine is one of the four basic components of ribonucleic acid (RNA
RNA
Ribonucleic acid , or RNA, is one of the three major macromolecules that are essential for all known forms of life....
); the other three are adenosine, guanosine
Guanosine
Guanosine is a purine nucleoside comprising guanine attached to a ribose ring via a β-N9-glycosidic bond. Guanosine can be phosphorylated to become guanosine monophosphate , cyclic guanosine monophosphate , guanosine diphosphate , and guanosine triphosphate...
, and cytidine
Cytidine
Cytidine is a nucleoside molecule that is formed when cytosine is attached to a ribose ring via a β-N1-glycosidic bond...
. Upon digestion of foods containing RNA, uridine is released from RNA and is absorbed intact in the gut. Some food sources of uridine are:

Note: It has been suggested that the RNA content of yeast products should be chemically reduced if these products are to be consumed in high amounts (50 grams or more per day) as a source of protein. However, such processing is expensive and, as of 2008, commonly available brewer's yeast products were not RNA-reduced.

Harvard researchers report that supplementation in rats with a combination of uridine and EPA/DHA omega-3 fatty acids has antidepressant activity equivalent to that of commonly prescribed antidepressant medications, such as Prozac and other SSRIs.


Uridine in the Glycolysis Pathway

Uridine plays a role in the glycolysis
Glycolysis
Glycolysis is the metabolic pathway that converts glucose C6H12O6, into pyruvate, CH3COCOO− + H+...
pathway of galactose
Galactose
Galactose , sometimes abbreviated Gal, is a type of sugar that is less sweet than glucose. It is a C-4 epimer of glucose....
. There is no catabolic process to metabolize galactose. Therefore, galactose is converted to glucose
Glucose
Glucose is a simple sugar and an important carbohydrate in biology. Cells use it as the primary source of energy and a metabolic intermediate...
and metabolized in the common glucose pathway.
Once the incoming galactose has been converted into galactose-1-phosphate (Gal-1-P), it is involved in a reaction with UDP-glucose, a glucose molecule bonded to a UDP (uridine-di-phosphate) molecule. This process is catalyzed by the enzyme galactose-1-phosphate uridyl transferase, and transfers the UDP to the galactose molecule. The end result is a UDP-galactose molecule and a glucose-1-phosphate molecule. This process is continued to allow the proper glycolysis of the galactose molecule.
The source of this article is wikipedia, the free encyclopedia.  The text of this article is licensed under the GFDL.