Encyclopedia
In carbohydrate chemistry
Carbohydrate chemistry
Carbohydrate chemistry is a subdiscipline of chemistry primarily concerned with the synthesis, structure, and function of carbohydrate structures. Due to the general structure of carbohydrates, their synthesis is often preoccupied with the selective formation of glycosidic linkages and the...
, an anomer is a special type of epimer
Epimer
In chemistry, epimers are diastereomers that differ in configuration of only one stereogenic center. Diastereomers are a class of stereoisomers that are non-superposable, non-mirror images of one another....
. It is one of two stereoisomers of a cyclic saccharide that differs only in its configuration at the hemiacetal
Hemiacetal
Hemiacetals and hemiketals are compounds that are derived from aldehydes and ketones respectively. The Greek word hèmi means half...
or hemiketal carbon, also called the anomeric carbon. Anomerization is the process of conversion of one anomer to the other. Anomerization is the anomeric analogue of epimerization.

Two anomers are designated alpha (α) or beta (β), according to the configurational relationship between the anomeric centre and the anomeric reference atom, hence they are relative stereodescriptors.

The anomeric centre is in hemiacetals the anomeric carbon C-1, which is attached to the hemiacetal oxygen (in the ring) and in hemiketals carbon C-2, attached to the hemiketal oxygen. In aldohexose
Aldohexose
An aldohexose is a hexose with an aldehyde group on one end.The aldohexoses have four chiral centres for a total of 16 possible aldohexose stereoisomers . Of these, only three commonly occur in nature: D-glucose, D-galactose, and D-mannose...
s and smaller carbohydrates the anomeric reference atom is the furthest chiral centre in the ring (the configurational atom, defining the sugar as D or L). In α-D-glucopyranose the reference atom is C-5.

For cyclic compounds, however, use of the Fischer projection is complicated and not common.

α-D-Glucopyranose
Glucose
Glucose is a simple sugar and an important carbohydrate in biology. Cells use it as the primary source of energy and a metabolic intermediate...
has opposite stereochemistry at both C-1 and C-5 (respectively S and R), whereas in β-D-glucopyranose they are the same (both R).

In α-L-arabinopyranose
Arabinose
Arabinose is an aldopentose – a monosaccharide containing five carbon atoms, and including an aldehyde functional group.For biosynthetic reasons, most saccharides are almost always more abundant in nature as the "D"-form, or structurally analogous to D-glyceraldehyde.For sugars, the D/L...
, the absolute configurations at C-1 and C-4 are respectively R and S, so they are also different, but opposite to those in α-D-glucopyranose. Both sugars are α, even though the position of the anomeric oxygen is different.

Anomerization is the process of conversion of one anomer to the other. For reducing sugar
Reducing sugar
A reducing sugar is any sugar that either has an aldehyde group or is capable of forming one in solution through isomerisation. This functional group allows the sugar to act as a reducing agent, for example in the Tollens' test or Benedict's test.-Chemistry:...
s, anomerization occurs readily in solution. This reversible process typically leads to an anomeric mixture in which eventually an equilibrium is reached between the two single anomers.
The ratio
Ratio
In mathematics, a ratio is a relationship between two numbers of the same kind , usually expressed as "a to b" or a:b, sometimes expressed arithmetically as a dimensionless quotient of the two which explicitly indicates how many times the first number contains the second In mathematics, a ratio is...
of the two single anomers is specific for the regarding sugar. For example, regardless of the configuration of the starting D-glucose, a solution will gradually move towards being a mixture of approximately 64% β-D-glucopyranoside and 36% of α-D-glucopyranose. If the ratio changes, also the optical rotation
Optical rotation
Optical rotation is the turning of the plane of linearly polarized light about the direction of motion as the light travels through certain materials. It occurs in solutions of chiral molecules such as sucrose , solids with rotated crystal planes such as quartz, and spin-polarized gases of atoms...
will change; this phenomenon is called mutarotation
Mutarotation
Mutarotation is the change in the optical rotation that occurs by epimerization...
. 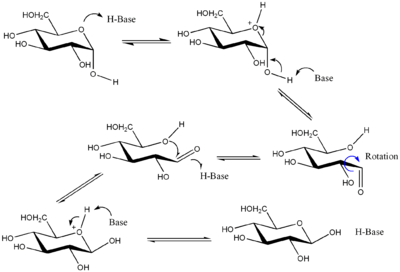 If the reaction would take place in amphoteric solution such as 2-pyridone
2-Pyridone
2-Pyridone is an organic compound with the formula . This colourless crystalline solid is used in peptide synthesis. It is well known to form hydrogen bonded structures somewhat related to the base-pairing mechanism found in RNA and DNA...
, the rate of anomerization would be much faster : 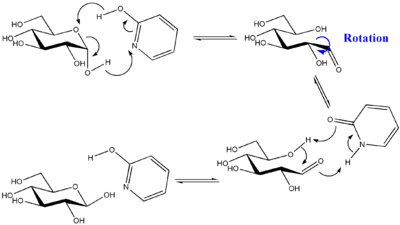 Anomers are different in structure, and thus have different stabilizing and destabilizing effects from each other. The major contributors to the stability of a certain anomer are:

For D-glucopyranoside, the β-anomer is the more stable anomer. The main effect in this case is the absence of 1,3-diaxial interactions. For D-mannopyranose
Mannose
Mannose is a sugar monomer of the aldohexose series of carbohydrates. Mannose is a C-2 epimer of glucose. It is not part of human metabolism, but is a component of microbial cell walls, and is therefore a target of the immune system and also of antibiotics....
, the α-anomer is the more stable anomer because this form avoids dipolar repulsion between the anomeric hydroxyl and the hydroxyl on the next carbon in the ring.

Because anomers are diastereomers of each other, they often differ in physical and chemical properties. One of the most important physical properties that is used to study anomers is the specific rotation
Specific rotation
In stereochemistry, the specific rotation of a chemical compound [α] is defined as the observed angle of optical rotation α when plane-polarized light is passed through a sample with a path length of 1 decimeter and a sample concentration of 1 gram per 1 millilitre. It is the main property used to...
, which can me monitored by polarimetry
Polarimetry
Polarimetry is the measurement and interpretation of the polarization of transverse waves, most notably electromagnetic waves, such as radio or light waves...
.