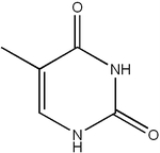 Thymine combined with deoxyribose
Deoxyribose
Deoxyribose, more, precisely 2-deoxyribose, is a monosaccharide with idealized formula H---3-H. Its name indicates that it is a deoxy sugar, meaning that it is derived from the sugar ribose by loss of an oxygen atom...
creates the nucleoside
Nucleoside
Nucleosides are glycosylamines consisting of a nucleobase bound to a ribose or deoxyribose sugar via a beta-glycosidic linkage...
deoxythymidine, which is synonymous with the term thymidine
Thymidine
Thymidine is a chemical compound, more precisely a pyrimidine deoxynucleoside. Deoxythymidine is the DNA nucleoside T, which pairs with deoxyadenosine in double-stranded DNA...
. Thymidine can be phosphorylated with one, two, or three phosphoric acid groups, creating, respectively, TMP, TDP, or TTP (thymidine mono-, di-, or triphosphate).

One of the common mutations of DNA involves two adjacent thymines or cytosine, which, in presence of ultraviolet light
Ultraviolet
Ultraviolet light is electromagnetic radiation with a wavelength shorter than that of visible light, but longer than X-rays, in the range 10 nm to 400 nm, and energies from 3 eV to 124 eV...
, may form thymine dimers, causing "kinks" in the DNA molecule that inhibit normal function.


Thymine could also be a target for actions of 5-fluorouracil
Fluorouracil
Fluorouracil is a drug that is a pyrimidine analog which is used in the treatment of cancer. It is a suicide inhibitor and works through irreversible inhibition of thymidylate synthase. It belongs to the family of drugs called antimetabolites...
(5-FU) in cancer
Cancer
Cancer , known medically as a malignant neoplasm, is a large group of different diseases, all involving unregulated cell growth. In cancer, cells divide and grow uncontrollably, forming malignant tumors, and invade nearby parts of the body. The cancer may also spread to more distant parts of the...
treatment. 5-FU can be a metabolic analog of thymine (in DNA synthesis) or uracil (in RNA synthesis). Substitution of this analog inhibits DNA synthesis
DNA synthesis
DNA synthesis commonly refers to:*DNA replication - DNA biosynthesis *Polymerase chain reaction - enzymatic DNA synthesis *Oligonucleotide synthesis - chemical synthesis of nucleic acids...
in actively dividing cells.

Thymine bases are frequently oxidized to hydantoins over time after the death of an organism.