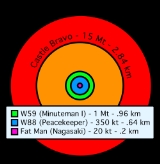 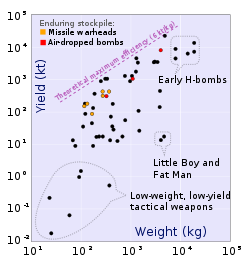 The explosive yield of a nuclear weapon is the amount of energy
Energy
In physics, energy is an indirectly observed quantity. It is often understood as the ability a physical system has to do work on other physical systems...
discharged when a nuclear weapon
Nuclear weapon
A nuclear weapon is an explosive device that derives its destructive force from nuclear reactions, either fission or a combination of fission and fusion. Both reactions release vast quantities of energy from relatively small amounts of matter. The first fission bomb test released the same amount...
is detonated, expressed usually in the equivalent mass
Mass
Mass can be defined as a quantitive measure of the resistance an object has to change in its velocity.In physics, mass commonly refers to any of the following three properties of matter, which have been shown experimentally to be equivalent:...
of trinitrotoluene (TNT), either in kilotons (thousands of tons of TNT) or megatons
TNT equivalent
TNT equivalent is a method of quantifying the energy released in explosions. The ton of TNT is a unit of energy equal to 4.184 gigajoules, which is approximately the amount of energy released in the detonation of one ton of TNT...
(millions of tons of TNT), but sometimes also in terajoules (1 kiloton of TNT = 4.184 TJ). Because the precise amount of energy released by TNT is and was subject to measurement uncertainties, especially at the dawn of the nuclear age, the accepted convention is that one kt of TNT is simply defined to be 1012 calorie
Calorie
The calorie is a pre-SI metric unit of energy. It was first defined by Nicolas Clément in 1824 as a unit of heat, entering French and English dictionaries between 1841 and 1867. In most fields its use is archaic, having been replaced by the SI unit of energy, the joule...
s equivalent, this being very roughly equal to the energy yield of 1,000 tons of TNT.

The yield-to-weight ratio is the amount of weapon yield compared to the mass of the weapon. The theoretical maximum yield-to-weight ratio for fusion weapons (thermonuclear weapons) is 6 megatons of TNT per metric ton of bomb mass (25 TJ/kg). Yields of 5.2 megatons/ton and higher have been reported for large weapons constructed for single-warhead use in the early 1960s. Since this time, the smaller warheads needed to achieve the increased net damage efficiency (bomb damage/bomb weight) of multiple warhead systems, has resulted in decreases in the yield/weight ratio for single modern warheads.

In order of increasing yield (most yield figures are approximate): 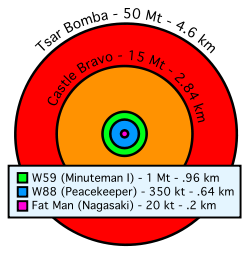 As a comparison, the blast yield of the GBU-43 Massive Ordnance Air Blast bomb
GBU-43 Massive Ordnance Air Blast bomb
The GBU-43/B Massive Ordnance Air Blast bomb is a large-yield conventional bomb developed for the United States military by Albert L. Weimorts, Jr. At the time of development, it was touted as the most powerful non-nuclear weapon ever designed...
is 0.011 kt, and that of the Oklahoma City bombing
Oklahoma City bombing
The Oklahoma City bombing was a terrorist bomb attack on the Alfred P. Murrah Federal Building in downtown Oklahoma City on April 19, 1995. It was the most destructive act of terrorism on American soil until the September 11, 2001 attacks. The Oklahoma blast claimed 168 lives, including 19...
, using a truck-based fertilizer bomb, was 0.002 kt. Most artificial non-nuclear explosions are considerably smaller than even what are considered to be very small nuclear weapons.

The yield-to-weight ratio is the amount of weapon yield compared to the mass of the weapon. The theoretical maximum yield-to-weight ratio for fusion weapons is 6 megatons of TNT per metric ton (25 TJ/kg). The practical achievable limit is somewhat lower, and tends to be lower for smaller, lighter weapons, of the sort that are emphasized in today's arsenals, designed for efficient MIRV use, or delivery by cruise missile systems.

Again, it is helpful for understanding to emphasize that large single warheads are seldom a part of today's arsenals, since smaller MIRV warheads are far more destructive for a given total yield or payload capacity. This effect, which results from the fact that destructive power of a single warhead scales approximately as the 2/3 power of its yield, more than makes up for the lessened yield/weight efficiency encountered if ballistic missile warheads are scaled-down from the maximal size that could be carried by a single-warhead missile.

Yields of nuclear explosion
Nuclear explosion
A nuclear explosion occurs as a result of the rapid release of energy from an intentionally high-speed nuclear reaction. The driving reaction may be nuclear fission, nuclear fusion or a multistage cascading combination of the two, though to date all fusion based weapons have used a fission device...
s can be very hard to calculate, even using numbers as rough as in the kiloton or megaton range (much less down to the resolution of individual terajoules). Even under very controlled conditions, precise yields can be very hard to determine, and for less controlled conditions the margins of error can be quite large. Yields can be calculated in a number of ways, including calculations based on blast size, blast brightness, seismographic data, and the strength of the shock wave. Enrico Fermi
Enrico Fermi
Enrico Fermi was an Italian-born, naturalized American physicist particularly known for his work on the development of the first nuclear reactor, Chicago Pile-1, and for his contributions to the development of quantum theory, nuclear and particle physics, and statistical mechanics...
famously made a (very) rough calculation of the yield of the Trinity test
Trinity test
Trinity was the code name of the first test of a nuclear weapon. This test was conducted by the United States Army on July 16, 1945, in the Jornada del Muerto desert about 35 miles southeast of Socorro, New Mexico, at the new White Sands Proving Ground, which incorporated the Alamogordo Bombing...
by dropping small pieces of paper in the air and measuring at how far they were moved by the shock wave of the explosion.
A good approximation of the yield of the Trinity test device was obtained in 1950 from simple dimensional analysis
Dimensional analysis
In physics and all science, dimensional analysis is a tool to find or check relations among physical quantities by using their dimensions. The dimension of a physical quantity is the combination of the basic physical dimensions which describe it; for example, speed has the dimension length per...
as well as an estimation of the heat capacity for very hot air, by the British physicist G. I. Taylor
Geoffrey Ingram Taylor
Sir Geoffrey Ingram Taylor OM was a British physicist, mathematician and expert on fluid dynamics and wave theory. His biographer and one-time student, George Batchelor, described him as "one of the most notable scientists of this century".-Biography:Taylor was born in St. John's Wood, London...
. Taylor had initially done this highly classified work in mid-1941, and published a paper which included an analysis of the Trinity data fireball when the Trinity photograph data was declassified in 1950 (after the USSR had exploded its own version of this bomb).

Taylor noted that the radius
Radius
In classical geometry, a radius of a circle or sphere is any line segment from its center to its perimeter. By extension, the radius of a circle or sphere is the length of any such segment, which is half the diameter. If the object does not have an obvious center, the term may refer to its...
R of the blast should initially depend only on the energy E of the explosion, the time t after the detonation, and the density ρ of the air. The only number having dimensions of length that can be constructed from these quantities is:

Using the picture of the Trinity test shown here (which had been publicly released by the U.S. government and published in Life
Life (magazine)
Life generally refers to three American magazines:*A humor and general interest magazine published from 1883 to 1936. Time founder Henry Luce bought the magazine in 1936 solely so that he could acquire the rights to its name....
magazine), using successive frames or the explosion, Taylor found that R5/t2 is a constant in a given nuclear blast (especially between 0.38 ms after the shock wave has formed, and 1.93 ms before significant energy is lost by thermal radiation). Furthermore, he estimated a value for S numerically at 1.

A good approximation to Taylor's constant S for γ below about 2 is: S = [75(γ-1)/8π]1/5.
. The value of the heat capacity ratio
Heat capacity ratio
The heat capacity ratio or adiabatic index or ratio of specific heats, is the ratio of the heat capacity at constant pressure to heat capacity at constant volume . It is sometimes also known as the isentropic expansion factor and is denoted by \gamma or \kappa . The latter symbol kappa is...
here is between the 1.67 of fully dissociated air molecules and the lower value for very hot diatomic air (1.2), and under conditions of an atomic fireball is (coincidentally) close to the S.T.P. (standard) gamma for room temperature air, which is 1.4. This gives the value of Taylor's S constant to be 1.036 for the adiabatic hypershock region where the constant R5/t2 condition holds.


Other methods and controversy

Where this data is not available, as in a number of cases, precise yields have been in dispute, especially when they are tied to questions of politics. The weapons used in the atomic bombings of Hiroshima and Nagasaki
Atomic bombings of Hiroshima and Nagasaki
During the final stages of World War II in 1945, the United States conducted two atomic bombings against the cities of Hiroshima and Nagasaki in Japan, the first on August 6, 1945, and the second on August 9, 1945. These two events are the only use of nuclear weapons in war to date.For six months...
, for example, were highly individual and very idiosyncratic designs, and gauging their yield retrospectively has been quite difficult. The Hiroshima bomb, "Little Boy
Little Boy
"Little Boy" was the codename of the atomic bomb dropped on Hiroshima on August 6, 1945 by the Boeing B-29 Superfortress Enola Gay, piloted by Colonel Paul Tibbets of the 393rd Bombardment Squadron, Heavy, of the United States Army Air Forces. It was the first atomic bomb to be used as a weapon...
", is estimated to have been between 12 ktTNT (a 20% margin of error), while the Nagasaki bomb, "Fat Man
Fat Man
"Fat Man" is the codename for the atomic bomb that was detonated over Nagasaki, Japan, by the United States on August 9, 1945. It was the second of the only two nuclear weapons to be used in warfare to date , and its detonation caused the third man-made nuclear explosion. The name also refers more...
", is estimated to be between 18 ktTNT (a 10% margin of error). Such apparently small changes in values can be important when trying to use the data from these bombings as reflective of how other bombs would behave in combat, and also result in differing assessments of how many "Hiroshima bombs" other weapons are equivalent to (for example, the Ivy Mike
Ivy Mike
Ivy Mike was the codename given to the first United States test of a thermonuclear weapon, in which a major part of the explosive yield came from nuclear fusion. It was detonated on November 1, 1952 by the United States at on Enewetak, an atoll in the Pacific Ocean, as part of Operation Ivy...
hydrogen bomb was equivalent to either 867 or 578 Hiroshima weapons — a rhetorically quite substantial difference — depending on whether one uses the high or low figure for the calculation). Other disputed yields have included the massive Tsar Bomba
Tsar Bomba
Tsar Bomba is the nickname for the AN602 hydrogen bomb, the most powerful nuclear weapon ever detonated. It was also referred to as Kuz'kina Mat , in this usage meaning "something that has not been seen before"....
, whose yield was claimed between being "only" 50 MtTNT or at a maximum of 57 MtTNT by differing political figures, either as a way for hyping the power of the bomb or as an attempt to undercut it.