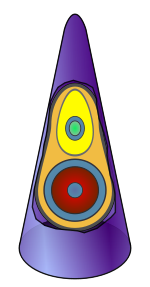 The Trident II
Trident missile
The Trident missile is a submarine-launched ballistic missile equipped with multiple independently-targetable reentry vehicles . The Fleet Ballistic Missile is armed with nuclear warheads and is launched from nuclear-powered ballistic missile submarines . Trident missiles are carried by fourteen...
SLBM can be armed with up to 8 W88 (475 kt) warheads (Mark 5) or 8 W76
W76
The W76 is a United States thermonuclear warhead. It was manufactured from 1978-1987, and is still in service .The W-76 is carried inside a Mk-4 re-entry vehicle. U.S...
(100 kt) warheads (Mark 4), but it is limited to 4 warheads under SORT
SORT
The Treaty Between the United States of America and the Russian Federation on Strategic Offensive Reductions , also known as the Treaty of Moscow, was a strategic arms reduction treaty between the United States and Russia that was in force from June 2003 until February 2011 when it was superseded...
.

In 1999, a reporter for the San Jose Mercury News
San Jose Mercury News
The San Jose Mercury News is a daily newspaper in San Jose, California. On its web site, however, it calls itself Silicon Valley Mercury News. The paper is owned by MediaNews Group...
reported that the U.S. W88 nuclear warhead, a small MIRVed warhead used on the Trident II
Trident missile
The Trident missile is a submarine-launched ballistic missile equipped with multiple independently-targetable reentry vehicles . The Fleet Ballistic Missile is armed with nuclear warheads and is launched from nuclear-powered ballistic missile submarines . Trident missiles are carried by fourteen...
SLBM
Submarine-launched ballistic missile
A submarine-launched ballistic missile is a ballistic missile capable of delivering a nuclear warhead that can be launched from submarines. Modern variants usually deliver multiple independently targetable reentry vehicles each of which carries a warhead and allows a single launched missile to...
, had a prolate
Spheroid
A spheroid, or ellipsoid of revolution is a quadric surface obtained by rotating an ellipse about one of its principal axes; in other words, an ellipsoid with two equal semi-diameters....
(egg
Oval (geometry)
In technical drawing, an oval is a figure constructed from two pairs of arcs, with two different radii . The arcs are joined at a point, in which lines tangential to both joining arcs lie on the same line, thus making the joint smooth...
- or watermelon
Watermelon
Watermelon is a vine-like flowering plant originally from southern Africa. Its fruit, which is also called watermelon, is a special kind referred to by botanists as a pepo, a berry which has a thick rind and fleshy center...
-shaped) primary (code-named Komodo) and a spherical secondary (code-named Cursa) inside a specially-shaped radiation case (known as the "peanut" for its shape). A story four months later in The New York Times
The New York Times
The New York Times is an American daily newspaper founded and continuously published in New York City since 1851. The New York Times has won 106 Pulitzer Prizes, the most of any news organization...
by William Broad reported that in 1995, a supposed double agent
Double agent
A double agent, commonly abbreviated referral of double secret agent, is a counterintelligence term used to designate an employee of a secret service or organization, whose primary aim is to spy on the target organization, but who in fact is a member of that same target organization oneself. They...
from the People's Republic of China delivered information indicating that China knew these details about the W88 warhead as well, supposedly through espionage (this line of investigation eventually resulted in the abortive trial of Wen Ho Lee
Wen Ho Lee
Dr. Wen Ho Lee is a Taiwan-born Taiwanese American scientist who worked for the University of California at the Los Alamos National Laboratory. He created simulations of nuclear explosions for the purposes of scientific inquiry, as well as for improving the safety and reliability of the US nuclear...
). If these stories are true, it would indicate a variation of the Teller-Ulam design which would allow for the miniaturization required for small MIRVed warheads.

The value of a prolate primary lies apparently in the fact that a MIRV warhead is limited by the diameter of the primary — if a prolate primary can be made to work properly, then the MIRV warhead can be made considerably smaller yet still deliver a high-yield explosion — a W88 warhead manages to yield up 475 kt with a physics package 68.9 in (1.75 m) long, with a maximum diameter of 21.8 in (0.55 m), and weighing probably less than 800 lb (360 kg). Smaller warheads can allow a nation to fit more of them onto a single missile, as well as improve in more basic flight properties such as speed, mileage, and range.

The calculations for a nonspherical primary are apparently orders of magnitude harder than for a spherical primary (a spherically symmetric simulation is one dimensional, while an axially symmetric simulation is two dimensional; simulations typically divide up each dimension into discrete segments, so a one dimensional simulation might involve only 100 points, while a similarly accurate two dimensional simulation would require 10,000), which would likely be the reason they would be desirable for a country like the People's Republic of China (which already developed its own nuclear and thermonuclear weapons), especially since they were no longer conducting nuclear testing
Nuclear testing
Nuclear weapons tests are experiments carried out to determine the effectiveness, yield and explosive capability of nuclear weapons. Throughout the twentieth century, most nations that have developed nuclear weapons have tested them...
which would provide valuable design information.