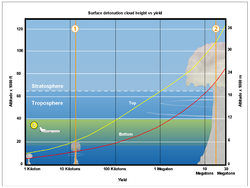 The kiloton and megaton of TNT have traditionally been used to rate the energy output, and hence destructive power, of nuclear weapon
Nuclear weapon
A nuclear weapon is an explosive device that derives its destructive force from nuclear reactions, either fission or a combination of fission and fusion. Both reactions release vast quantities of energy from relatively small amounts of matter. The first fission bomb test released the same amount...
s (see nuclear weapon yield
Nuclear weapon yield
The explosive yield of a nuclear weapon is the amount of energy discharged when a nuclear weapon is detonated, expressed usually in the equivalent mass of trinitrotoluene , either in kilotons or megatons , but sometimes also in terajoules...
). This unit is written into various nuclear weapon control treaties, and gives a sense of destructiveness as compared with ordinary explosives, like TNT. More recently, it has been used to describe the energy released in other highly destructive events, such as asteroid
Asteroid
Asteroids are a class of small Solar System bodies in orbit around the Sun. They have also been called planetoids, especially the larger ones...
impacts. However, TNT is not the most energetic of conventional explosives. Dynamite, for example, has more than 60% more energy density (approximately 7.5 MJ/kg, compared to 4.7 MJ/kg for TNT).

This definition is a conventional one. The explosive's energy is normally calculated using the thermodynamic work energy of detonation, which for TNT has been accurately measured at 4686 J/g from large numbers of air blast experiments and theoretically calculated to be 4853 J/g.

The measured pure heat
Heat
In physics and thermodynamics, heat is energy transferred from one body, region, or thermodynamic system to another due to thermal contact or thermal radiation when the systems are at different temperatures. It is often described as one of the fundamental processes of energy transfer between...
output of a gram of TNT is only 2724 J, but this is not the important value for explosive blast effect calculations.

A kiloton of TNT can be visualized as a cube of TNT of 8.46 metres on a side.