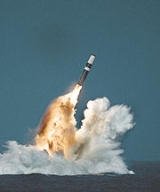 Is it true that Britain before launching trident missiles has to get permission from America?
More

Trident I (designated C4) was deployed in 1979 and phased out in the 1990s and early 2000s. Its objective was to achieve performance similar to Poseidon (C3) but at extended range which improved survivability of the submarine. Trident II (designated D5) had the objective of improved accuracy, and was first deployed in 1990, and was planned to be in service for the thirty-year life of the submarines, until 2027.

Trident missiles are provided to the United Kingdom under the terms of the 1963 Polaris Sales Agreement
Polaris Sales Agreement
The Polaris Sales Agreement was an agreement between the United States and the United Kingdom which formally arranged for the Polaris missile system to be provided to the UK to maintain its independent nuclear deterrent. The arrangement had been set up in principle as a result of the Nassau Agreement...
which was modified in 1982 for Trident. British Prime Minister Margaret Thatcher
Margaret Thatcher
Margaret Hilda Thatcher, Baroness Thatcher, was Prime Minister of the United Kingdom from 1979 to 1990...
wrote to President Carter
Jimmy Carter
James Earl "Jimmy" Carter, Jr. is an American politician who served as the 39th President of the United States and was the recipient of the 2002 Nobel Peace Prize, the only U.S. President to have received the Prize after leaving office...
on July 10, 1980, to request that he approve supply of Trident I missiles. However in 1982 Thatcher wrote to President Reagan
Ronald Reagan
Ronald Wilson Reagan was the 40th President of the United States , the 33rd Governor of California and, prior to that, a radio, film and television actor....
to request the United Kingdom be allowed to procure the Trident II system, the procurement of which had been accelerated by the US Navy. This was agreed in March 1982. Under the agreement, the United Kingdom made a 5% research and development contribution.

In 2002, the United States Navy announced plans to extend the life of the submarines and the D5 missiles to the year 2040. This requires a D5 Life Extension Program (D5LEP,) which is currently underway. The main aim is to replace obsolete components at minimal cost by using commercial off the shelf (COTS) hardware; all the while maintaining the demonstrated performance of the existing Trident II missiles. In 2007, Lockheed Martin was awarded a total of $848 million in contracts to perform this and related work, which also includes upgrading the missiles' reentry systems. On the same day, Draper Labs was awarded $318 million for upgrade of the Guidance System. Then British Prime Minister Tony Blair
Tony Blair
Anthony Charles Lynton Blair is a former British Labour Party politician who served as the Prime Minister of the United Kingdom from 2 May 1997 to 27 June 2007. He was the Member of Parliament for Sedgefield from 1983 to 2007 and Leader of the Labour Party from 1994 to 2007...
was quoted as saying the issue would be fully debated in Parliament prior to a decision being taken. Blair outlined plans
British replacement of the Trident system
The British replacement of Trident is a proposal to replace the existing Vanguard class of four Trident ballistic-missile armed submarines with a new class designed to continue a nuclear deterrent after the current boats reach the end of their service lives...
in Parliament on December 4, 2006 to build a new generation of submarines to carry existing Trident missiles, and join the D5LE project to refurbish them. 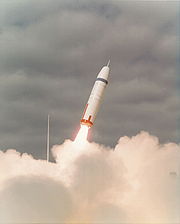 The launch from the submarine occurs below the ocean surface. The missiles are ejected from their tubes by igniting an explosive charge in a separate container which is separated by seventeen titanium alloy pinnacles activated by a double alloy steam system. The energy from the blast is directed to a water tank, which is flash-vaporized to steam. The subsequent pressure spike is strong enough to eject the missile out of the tube and give it enough momentum to reach and clear the surface of the water. The missile is pressurized with nitrogen
Nitrogen
Nitrogen is a chemical element that has the symbol N, atomic number of 7 and atomic mass 14.00674 u. Elemental nitrogen is a colorless, odorless, tasteless, and mostly inert diatomic gas at standard conditions, constituting 78.08% by volume of Earth's atmosphere...
to prevent the intrusion of water into any internal spaces, which could damage the missile or add weight, destabilizing the missile. Should the missile fail to breach the surface of the water, there are several safety mechanisms that can either deactivate the missile before launch or guide the missile through an additional phase of launch. Inertial motion sensors are activated upon launch, and when the sensors detect downward acceleration after being blown out of the water, the first stage engine ignites. The aerospike, a telescoping outward extension that halves aerodynamic drag, is then deployed, and the boost phase begins. When the third stage motor fires, within two minutes of launch, the missile is traveling faster than 20,000 ft/s (6,000 m/s), or 13,600 mph (21,600 km/h).

The missile attains a temporary low altitude orbit only a few minutes after launch. The Guidance System for the missile was developed by the Charles Stark Draper Laboratory
Charles Stark Draper Laboratory
Draper Laboratory is an American not-for-profit research and development organization in Cambridge, Massachusetts. Draper focuses on the design, development, and deployment of advanced technology solutions to problems in national security, space exploration, health care and energy.Originally...
and is maintained by a joint Draper/General Dynamics Advanced Information Systems facility. It is an Inertial Guidance System with an additional Star-Sighting
Star-Sighting
Star-sighting generally refers to a type of navigation which uses the position of the stars to determine direction or the observer's position. Polaris, can be used to determine North at any time of night when stars are visible in the Northern Hemisphere. Other stars can be used for navigation if...
system, which is used to correct small position and velocity errors that result from launch condition uncertainties due to the sub navigation system errors and some errors that have accrued by the guidance system during the flight due to imperfect instrument calibration. GPS has been used on some test flights but is assumed not to be available for a real mission. The fire control system was designed and continues to be maintained by General Dynamics Advanced Information Systems.

Once the Star-sighting has been completed, the "bus" section of the missile maneuvers to achieve the various velocity vectors that will send the deployed multiple independent reentry vehicles to their individual targets. The downrange and crossrange dispersion of the targets remains classified.

The Trident was built in two variants: the I (C4) UGM-96A and II (D5) UGM-133A, however there is no direct relation between these two missiles. While C4, formerly known as EXPO (Extended Range Poseidon), is just an improved version of Poseidon C-3 missile, Trident II D-5 has completely new design (although with some technologies adopted from C-4). The C4 and D5 designations put the missiles within the "family" that started in 1960 with Polaris (A1, A2 and A3) and continued with the 1971 Poseidon (C3). Both Trident versions are three-stage, solid-propellant, inertially guided missiles, and both guidance systems use a star sighting to improve overall weapons system accuracy. 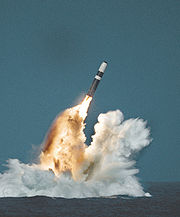 The second variant of the Trident is more sophisticated and can carry a heavier payload. It is accurate enough to be a first strike
First strike
In nuclear strategy, a first strike is a preemptive surprise attack employing overwhelming force. First strike capability is a country's ability to defeat another nuclear power by destroying its arsenal to the point where the attacking country can survive the weakened retaliation while the opposing...
, counterforce
Counterforce
In nuclear strategy, a counterforce target is one that has a military value, such as a launch silo for intercontinental ballistic missiles, an airbase at which nuclear-armed bombers are stationed, a homeport for ballistic missile submarines, or a command and control installation...
, or second strike
Second strike
In nuclear strategy, a second strike capability is a country's assured ability to respond to a nuclear attack with powerful nuclear retaliation against the attacker...
weapon. All three stages of the Trident II are made of graphite epoxy, making the missile much lighter. The Trident II was the original missile on the British Vanguard
Vanguard class submarine
The Vanguard class are the Royal Navy's current nuclear ballistic missile submarines , each armed with up to 16 Trident II Submarine-launched ballistic missiles...
and Ohio SSBNs from on. The D5 missile is currently carried by fourteen Ohio class SSBNs and four Vanguard class SSBNs. Lockheed Martin has carried out 135 consecutive successful test launches of the D5 missile since 1989, according to a company press release.

The Pentagon
The Pentagon
The Pentagon is the headquarters of the United States Department of Defense, located in Arlington County, Virginia. As a symbol of the U.S. military, "the Pentagon" is often used metonymically to refer to the Department of Defense rather than the building itself.Designed by the American architect...
proposed the Conventional Trident Modification program in 2006 to diversify its strategic options, as part of a broader long-term strategy to develop worldwide rapid strike capabilities, dubbed "Prompt Global Strike
Prompt Global Strike
Prompt Global Strike is a United States military effort to develop a system that can deliver a precision conventional weapon strike anywhere in the world within one hour, in a similar manner to a nuclear ICBM. Potential scenarios that would require such a fast response might include an impending...
".

The US$503 million program would have converted existing Trident II missiles (presumably two missiles per submarine) into conventional weapons, by fitting them with modified Mk4 reentry vehicles equipped with GPS for navigation update and a reentry guidance and control (trajectory correction) segment to perform 10 m class impact accuracy. No explosive is said to be used since the reentry vehicle's mass and hypersonic impact velocity provide sufficient mechanical energy and "effect". The second conventional warhead version is a fragmentation version that would disperse thousands of tungsten
Tungsten
Tungsten , also known as wolfram , is a chemical element with the chemical symbol W and atomic number 74.A hard, rare metal under standard conditions when uncombined, tungsten is found naturally on Earth only in chemical compounds. It was identified as a new element in 1781, and first isolated as...
rods which could obliterate an area of 3000 square feet. (approximately 280 square meters). It offered the promise of accurate conventional strikes with little warning and flight time.

The primary drawback of using conventionally-tipped ballistic missiles is that they are virtually impossible for radar warning systems to distinguish from nuclear-tipped missiles. This leaves open the likelihood that other nuclear-armed countries might mistake it for a nuclear launch which could provoke a counterattack. For that reason among others, this project raised a substantial debate before US Congress for the FY07 Defense budget, but also internationally. Then Russian President Vladimir Putin
Vladimir Putin
Vladimir Vladimirovich Putin served as the second President of the Russian Federation and is the current Prime Minister of Russia, as well as chairman of United Russia and Chairman of the Council of Ministers of the Union of Russia and Belarus. He became acting President on 31 December 1999, when...
, among others, warned that the project would increase the danger of accidental nuclear war. "The launch of such a missile could ... provoke a full-scale counterattack using strategic nuclear forces," Putin said in May 2006.