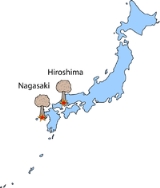 Overview
During the final stages of World War II
World War II
World War II, or the Second World War , was a global conflict lasting from 1939 to 1945, involving most of the world's nations—including all of the great powers—eventually forming two opposing military alliances: the Allies and the Axis...
in 1945, the United States conducted two atomic bombings against the cities of Hiroshima and Nagasaki in Japan, the first on August 6, 1945, and the second on August 9, 1945. These two events are the only use of nuclear weapon
Nuclear weapon
A nuclear weapon is an explosive device that derives its destructive force from nuclear reactions, either fission or a combination of fission and fusion. Both reactions release vast quantities of energy from relatively small amounts of matter. The first fission bomb test released the same amount...
s in war to date.

Was the 1874th Engineers Aviation in Nagasaki and Hiroshima after the nuclear bombs were dropped? Does anyone have any information as to when/where/w...

What is the name of American president for comand this

Events leading up to the bombings

Plans for further attacks on Japan

Hiroshima before the bombings

The destruction it caused on infrastructure
More
x