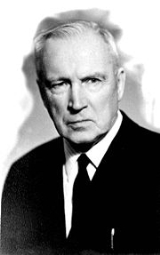 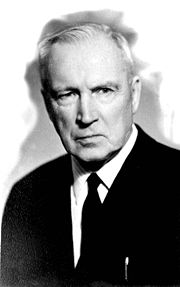 He graduated from Leningrad Mining Institute in 1922, obtained a Dr.Sc. in Geology and Mineralogy in 1936, and become professor in 1941. Started his geological career in 1920 at the USSR Geological Committee. In 1929-1971 worked for All-Union Geological Research Institute (VNIGRI). He suffered from political repressions during Joseph Stalin
Joseph Stalin
Joseph Vissarionovich Stalin was the Premier of the Soviet Union from 6 May 1941 to 5 March 1953. He was among the Bolshevik revolutionaries who brought about the October Revolution and had held the position of first General Secretary of the Communist Party of the Soviet Union's Central Committee...
’s regime for his unorthodox thinking, spending several years in Gulag
Gulag
The Gulag was the government agency that administered the main Soviet forced labor camp systems. While the camps housed a wide range of convicts, from petty criminals to political prisoners, large numbers were convicted by simplified procedures, such as NKVD troikas and other instruments of...
camps in the Transpolar European Russia as “enemy of the people”. After that, he was prohibited from living or staying in central cities of USSR. His only son died defending the Brest Fortress
Brest Fortress
Brest Fortress , formerly known as Brest-Litovsk Fortress , is a 19th century Russian fortress in Brest, Belarus. It is one of the most important Soviet World War II war monuments commemorating the Soviet resistance against the German invasion on June 22, 1941...
in the beginning of Nazi aggression against USSR.

Kudryavtsev conducted regional geological studies that resulted in discoveries of commercial oil and gas in the Grozny
Grozny
Grozny is the capital city of the Chechen Republic, Russia. The city lies on the Sunzha River. According to the preliminary results of the 2010 Census, the city had a population of 271,596; up from 210,720 recorded in the 2002 Census. but still only about two-thirds of 399,688 recorded in the 1989...
district (Chechnya Autonomy), Central Asia, Timan-Pechora, and other regions of the Soviet Union. He led reconnaissance exploration research in Georgia
Georgia (country)
Georgia is a sovereign state in the Caucasus region of Eurasia. Located at the crossroads of Western Asia and Eastern Europe, it is bounded to the west by the Black Sea, to the north by Russia, to the southwest by Turkey, to the south by Armenia, and to the southeast by Azerbaijan. The capital of...
, and compiled the program of key exploration wells in the West Siberia
Siberia
Siberia is an extensive region constituting almost all of Northern Asia. Comprising the central and eastern portion of the Russian Federation, it was part of the Soviet Union from its beginning, as its predecessor states, the Tsardom of Russia and the Russian Empire, conquered it during the 16th...
in 1947 that paved the way to the new era of oil and gas production in Russia that started with first gas gusher near Berezovo in 1953.

Kudryavtsev's Rule states that any region in which hydrocarbons are found at one level will also have hydrocarbons in large or small quantities at all levels down to and into the basement rock. Thus, where oil and gas deposits are found, there will often be coal seams above them. Gas is usually the deepest in the pattern, and can alternate with oil. All petroleum deposits have a capstone, which is generally impermeable to the upward migration of hydrocarbons. This capstone leads to the accumulation of the hydrocarbon.

Russian geologist Nikolai Kudryavtsev was also a prominent and forceful advocate of the abiogenic theory. He argued that no petroleum resembling the chemical composition of natural crudes has ever been made from plant material in the laboratory under conditions resembling those in nature.

He gave many examples of substantial and sometimes commercial quantities of petroleum being found in crystalline or metamorphic basements, or in sediments directly overlying those. He cited cases in Kansas
Kansas
Kansas is a US state located in the Midwestern United States. It is named after the Kansas River which flows through it, which in turn was named after the Kansa Native American tribe, which inhabited the area. The tribe's name is often said to mean "people of the wind" or "people of the south...
, California
California
California is a state located on the West Coast of the United States. It is by far the most populous U.S. state, and the third-largest by land area...
, western Venezuela
Venezuela
Venezuela , officially called the Bolivarian Republic of Venezuela , is a tropical country on the northern coast of South America. It borders Colombia to the west, Guyana to the east, and Brazil to the south...
and Morocco
Morocco
Morocco , officially the Kingdom of Morocco , is a country located in North Africa. It has a population of more than 32 million and an area of 710,850 km², and also primarily administers the disputed region of the Western Sahara...
. He also pointed out that oil pools in sedimentary strata are often related to fractures in the basement directly below. This is evidenced by the Ghawar supergiant oil field (Saudi Arabia
Saudi Arabia
The Kingdom of Saudi Arabia , commonly known in British English as Saudi Arabia and in Arabic as as-Sa‘ūdiyyah , is the largest state in Western Asia by land area, constituting the bulk of the Arabian Peninsula, and the second-largest in the Arab World...
); the Panhandle Field in Kansas (United States
United States
The United States of America is a federal constitutional republic comprising fifty states and a federal district...
), which also produces helium
Helium
Helium is the chemical element with atomic number 2 and an atomic weight of 4.002602, which is represented by the symbol He. It is a colorless, odorless, tasteless, non-toxic, inert, monatomic gas that heads the noble gas group in the periodic table...
; the Tengiz Field (Kazakhstan
Kazakhstan
Kazakhstan , officially the Republic of Kazakhstan, is a transcontinental country in Central Asia and Eastern Europe. Ranked as the ninth largest country in the world, it is also the world's largest landlocked country; its territory of is greater than Western Europe...
); the White Tiger Field (Vietnam
Vietnam
Vietnam – sometimes spelled Viet Nam , officially the Socialist Republic of Vietnam – is the easternmost country on the Indochina Peninsula in Southeast Asia. It is bordered by China to the north, Laos to the northwest, Cambodia to the southwest, and the South China Sea –...
); and innumerable others. The Lost Soldier Field in Wyoming
Wyoming
Wyoming is a state in the mountain region of the Western United States. The western two thirds of the state is covered mostly with the mountain ranges and rangelands in the foothills of the Eastern Rocky Mountains, while the eastern third of the state is high elevation prairie known as the High...
has oil pools, he stated, at every horizon of the geological section, from the Cambrian
Cambrian
The Cambrian is the first geological period of the Paleozoic Era, lasting from Mya ; it is succeeded by the Ordovician. Its subdivisions, and indeed its base, are somewhat in flux. The period was established by Adam Sedgwick, who named it after Cambria, the Latin name for Wales, where Britain's...
sandstone overlying the basement to the upper Cretaceous
Cretaceous
The Cretaceous , derived from the Latin "creta" , usually abbreviated K for its German translation Kreide , is a geologic period and system from circa to million years ago. In the geologic timescale, the Cretaceous follows the Jurassic period and is followed by the Paleogene period of the...
deposits. A flow of oil was also obtained from the basement itself. Hydrocarbon gases, he noted, are not rare in igneous and metamorphic rocks of the Canadian Shield. Petroleum in Precambrian gneiss
Gneiss
Gneiss is a common and widely distributed type of rock formed by high-grade regional metamorphic processes from pre-existing formations that were originally either igneous or sedimentary rocks.-Etymology:...
is encountered in wells on the eastern shore of Lake Baikal
Lake Baikal
Lake Baikal is the world's oldest at 30 million years old and deepest lake with an average depth of 744.4 metres.Located in the south of the Russian region of Siberia, between Irkutsk Oblast to the northwest and the Buryat Republic to the southeast, it is the most voluminous freshwater lake in the...
.

Kudryavtsev concluded that commercial accumulations are simply found where permeable zones are overlaid by impermeable ones.