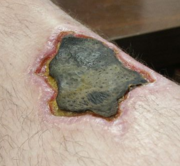 Necrosis is the premature death
Death
Death is the permanent termination of the biological functions that sustain a living organism. Phenomena which commonly bring about death include old age, predation, malnutrition, disease, and accidents or trauma resulting in terminal injury....
of cell
Cell (biology)
The cell is the basic structural and functional unit of all known living organisms. It is the smallest unit of life that is classified as a living thing, and is often called the building block of life. The Alberts text discusses how the "cellular building blocks" move to shape developing embryos....
s in living tissue
Biological tissue
Tissue is a cellular organizational level intermediate between cells and a complete organism. A tissue is an ensemble of cells, not necessarily identical, but from the same origin, that together carry out a specific function. These are called tissues because of their identical functioning...
. Necrosis is caused by factors external to the cell or tissue, such as infection, toxins, or trauma. This is in contrast to apoptosis
Apoptosis
Apoptosis is the process of programmed cell death that may occur in multicellular organisms. Biochemical events lead to characteristic cell changes and death. These changes include blebbing, cell shrinkage, nuclear fragmentation, chromatin condensation, and chromosomal DNA fragmentation...
, which is a naturally occurring cause of cellular death. While apoptosis often provides beneficial effects to the organism, necrosis is almost always detrimental and can be fatal.

Cells that die due to necrosis do not usually send the same chemical signals
Signal transduction
Signal transduction occurs when an extracellular signaling molecule activates a cell surface receptor. In turn, this receptor alters intracellular molecules creating a response...
to the immune system that cells undergoing apoptosis do. This prevents nearby phagocyte
Phagocyte
Phagocytes are the white blood cells that protect the body by ingesting harmful foreign particles, bacteria, and dead or dying cells. Their name comes from the Greek phagein, "to eat" or "devour", and "-cyte", the suffix in biology denoting "cell", from the Greek kutos, "hollow vessel". They are...
s from locating and engulfing the dead cells, leading to a build-up of dead tissue and cell debris at or near the site of the cell death. For this reason, it is often necessary to remove necrotic tissue surgically
Surgery
Surgery is an ancient medical specialty that uses operative manual and instrumental techniques on a patient to investigate and/or treat a pathological condition such as disease or injury, or to help improve bodily function or appearance.An act of performing surgery may be called a surgical...
, a process known as debridement
Debridement
Debridement is the medical removal of a patient's dead, damaged, or infected tissue to improve the healing potential of the remaining healthy tissue...
.

There are seven distinctive morphologic
Morphology (biology)
In biology, morphology is a branch of bioscience dealing with the study of the form and structure of organisms and their specific structural features....
patterns of necrosis:

In the United States, only spider bite
Spider bite
A spider bite is an injury resulting from the bites of spiders or other closely related arachnids.Spiders are active hunters and rely heavily on their bites to paralyze and kill their prey before consuming it. They also bite in self defense...
s from the brown recluse spider
Brown recluse spider
The brown recluse spider or violin spider, Loxosceles reclusa, is a member of the family Sicariidae . The spider has a venomous bite....
(genus Loxosceles) have been proven to cause necrosis. Other spiders of the same genus, such as the Chilean recluse
Chilean recluse
The Chilean recluse spider is a venomous spider, Loxosceles laeta, of the family Sicariidae . In Spanish, it is known as , or "corner spider"; in Portuguese, as or "brown spider"...
in South America, have similarly been shown to cause necrosis in other countries. While both the yellow sac spider
Cheiracanthium
Cheiracanthium is a genus of spiders in the Miturgidae family. Certain species are commonly known as the "yellow sac spider".- Description :...
s and Hobo spider
Hobo spider
The hobo spider is a member of the genus of spiders known colloquially as funnel web spiders, but not to be confused with the Australian funnel-web spider. It is one of a small number of spiders in North America whose bites are generally considered to be medically significant...
are often claimed to possess necrotic venom, these claims have been challenged.

A few other spiders commonly suspected (but not all conclusively proven) of having necrotic venom include: 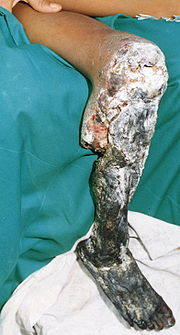 Cellular necrosis can be induced by a number of external sources, including injury
Injury
-By cause:*Traumatic injury, a body wound or shock produced by sudden physical injury, as from violence or accident*Other injuries from external physical causes, such as radiation injury, burn injury or frostbite*Injury from infection...
, infection
Infection
An infection is the colonization of a host organism by parasite species. Infecting parasites seek to use the host's resources to reproduce, often resulting in disease...
, cancer
Cancer
Cancer , known medically as a malignant neoplasm, is a large group of different diseases, all involving unregulated cell growth. In cancer, cells divide and grow uncontrollably, forming malignant tumors, and invade nearby parts of the body. The cancer may also spread to more distant parts of the...
, infarction
Infarction
In medicine, infarction refers to tissue death that is caused by a local lack of oxygen due to obstruction of the tissue's blood supply. The resulting lesion is referred to as an infarct.-Causes:...
, poisons, ROS (Reactive Oxygen Species), and inflammation
Inflammation
Inflammation is part of the complex biological response of vascular tissues to harmful stimuli, such as pathogens, damaged cells, or irritants. Inflammation is a protective attempt by the organism to remove the injurious stimuli and to initiate the healing process...
. For example, an infarction (blockage of blood flow to muscular tissue) causes necrosis of muscle tissue due to lack of oxygen to the affected cell, such as occurs in a myocardial infarction
Myocardial infarction
Myocardial infarction or acute myocardial infarction , commonly known as a heart attack, results from the interruption of blood supply to a part of the heart, causing heart cells to die...
-- a heart attack. Certain spider (brown recluse) and snake (rattlesnake
Rattlesnake
Rattlesnakes are a group of venomous snakes of the genera Crotalus and Sistrurus of the subfamily Crotalinae . There are 32 known species of rattlesnake, with between 65-70 subspecies, all native to the Americas, ranging from southern Alberta and southern British Columbia in Canada to Central...
, Bothrops
Bothrops
Bothrops is a genus of venomous pitvipers found in Central and South America. The generic name is derived from the Greek words bothros and ops that mean "pit" and "eye" or "face"; an allusion to the heat-sensitive loreal pit organs. Members of this genus are responsible for more human deaths in the...
) venom
Venom
Venom is the general term referring to any variety of toxins used by certain types of animals that inject it into their victims by the means of a bite or a sting...
s can cause necrosis of the tissue near the bite wound, as can a Group A streptococcus infection (one of the "flesh-eating" bacteria
Necrotizing fasciitis
Necrotizing fasciitis , commonly known as flesh-eating disease or Flesh-eating bacteria syndrome, is a rare infection of the deeper layers of skin and subcutaneous tissues, easily spreading across the fascial plane within the subcutaneous tissue.Necrotizing fasciitis is a quickly progressing and...
).

Necrosis typically begins with cell swelling, chromatin
Chromatin
Chromatin is the combination of DNA and proteins that make up the contents of the nucleus of a cell. The primary functions of chromatin are; to package DNA into a smaller volume to fit in the cell, to strengthen the DNA to allow mitosis and meiosis and prevent DNA damage, and to control gene...
digestion, and disruption of the plasma membrane and organelle
Organelle
In cell biology, an organelle is a specialized subunit within a cell that has a specific function, and is usually separately enclosed within its own lipid bilayer....
membranes. Late necrosis is characterized by extensive DNA
DNA
Deoxyribonucleic acid is a nucleic acid that contains the genetic instructions used in the development and functioning of all known living organisms . The DNA segments that carry this genetic information are called genes, but other DNA sequences have structural purposes, or are involved in...
hydrolysis
Hydrolysis
Hydrolysis is a chemical reaction during which molecules of water are split into hydrogen cations and hydroxide anions in the process of a chemical mechanism. It is the type of reaction that is used to break down certain polymers, especially those made by condensation polymerization...
, vacuolation of the endoplasmic reticulum
Endoplasmic reticulum
The endoplasmic reticulum is an organelle of cells in eukaryotic organisms that forms an interconnected network of tubules, vesicles, and cisternae...
, organelle breakdown, and cell lysis
Lysis
Lysis refers to the breaking down of a cell, often by viral, enzymic, or osmotic mechanisms that compromise its integrity. A fluid containing the contents of lysed cells is called a "lysate"....
. The release of intracellular content after plasma membrane rupture is the cause of inflammation
Inflammation
Inflammation is part of the complex biological response of vascular tissues to harmful stimuli, such as pathogens, damaged cells, or irritants. Inflammation is a protective attempt by the organism to remove the injurious stimuli and to initiate the healing process...
in necrosis.

Treatment of necrosis typically involves two distinct processes. Usually, the underlying cause of the necrosis must be treated before the dead tissue itself can be dealt with. For example, a snake or spider bite victim will receive anti-venom to halt the spread of the toxins, while an infected patient will receive antibiotics.

Even after the initial cause of the necrosis has been halted, the necrotic tissue will remain in the body. The body's immune response to apoptosis, the automatic breaking down and recycling of the cell material, is not triggered by necrotic cell death.

The standard therapy of necrosis (wounds, bedsores, burns, etc.) is surgical removal
Debridement
Debridement is the medical removal of a patient's dead, damaged, or infected tissue to improve the healing potential of the remaining healthy tissue...
of necrotic tissue. Depending on the severity of the necrosis, this may range from removal of small patches of skin, to complete amputation of affected limbs or organs. Chemical removal, via an enzymatic debriding agent, is another option. In select cases, special maggot therapy
Maggot therapy
Maggot therapy is a type of biotherapy involving the intentional introduction of live, disinfected maggots into the non-healing skin and soft tissue wound of a human or animal for the purpose of cleaning out the...
has been utilized with good results.

If calcium is deficient, pectin
Pectin
Pectin is a structural heteropolysaccharide contained in the primary cell walls of terrestrial plants. It was first isolated and described in 1825 by Henri Braconnot...
cannot be synthesized, and therefore the cell walls cannot be bonded and thus an impediment of the meristems. This will lead to necrosis of stem and root tips and leaf edges.