Phagocytosis is the cellular
Cell (biology)
The cell is the basic structural and functional unit of all known living organisms. It is the smallest unit of life that is classified as a living thing, and is often called the building block of life. The Alberts text discusses how the "cellular building blocks" move to shape developing embryos....
process of engulfing solid particles by the cell membrane
Cell membrane
The cell membrane or plasma membrane is a biological membrane that separates the interior of all cells from the outside environment. The cell membrane is selectively permeable to ions and organic molecules and controls the movement of substances in and out of cells. It basically protects the cell...
to form an internal phagosome
Phagosome
In cell biology, a phagosome is a vacuole formed around a particle absorbed by phagocytosis. The vacuole is formed by the fusion of the cell membrane around the particle. A phagosome is a cellular compartment in which pathogenic microorganisms can be killed and digested...
by phagocytes and protists. Phagocytosis is a specific form of endocytosis
Endocytosis
Endocytosis is a process by which cells absorb molecules by engulfing them. It is used by all cells of the body because most substances important to them are large polar molecules that cannot pass through the hydrophobic plasma or cell membrane...
involving the vesicular
Vesicle (biology)
A vesicle is a bubble of liquid within another liquid, a supramolecular assembly made up of many different molecules. More technically, a vesicle is a small membrane-enclosed sack that can store or transport substances. Vesicles can form naturally because of the properties of lipid membranes , or...
internalization of solid such as bacteria
Bacteria
Bacteria are a large domain of prokaryotic microorganisms. Typically a few micrometres in length, bacteria have a wide range of shapes, ranging from spheres to rods and spirals...
, and is, therefore, distinct from other forms of endocytosis such as the vesicular internalization of various liquids. Phagocytosis is involved in the acquisition of nutrients for some cells, and, in the immune system
Immune system
An immune system is a system of biological structures and processes within an organism that protects against disease by identifying and killing pathogens and tumor cells. It detects a wide variety of agents, from viruses to parasitic worms, and needs to distinguish them from the organism's own...
, it is a major mechanism used to remove pathogen
Pathogen
A pathogen gignomai "I give birth to") or infectious agent — colloquially, a germ — is a microbe or microorganism such as a virus, bacterium, prion, or fungus that causes disease in its animal or plant host...
s and cell debris. Bacteria, dead tissue cells, and small mineral particles are all examples of objects that may be phagocytosed.

The process is homologous
Homology (biology)
Homology forms the basis of organization for comparative biology. In 1843, Richard Owen defined homology as "the same organ in different animals under every variety of form and function". Organs as different as a bat's wing, a seal's flipper, a cat's paw and a human hand have a common underlying...
to eating only at the level of single-celled organisms; in multicellular animals, the process has been adapted to eliminate debris and pathogens, as opposed to taking in fuel for cellular processes, except in the case of the Trichoplax
Trichoplax
The Placozoa are a basal form of invertebrate. They are the simplest in structure of all non-parasitic multicellular animals . They are generally classified as a single species, Trichoplax adhaerens, although there is enough genetic diversity that it is likely that there are multiple,...
. 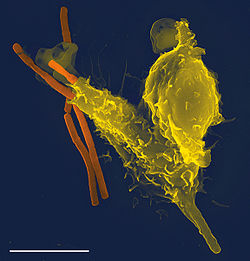 Phagocytosis in mammalian immune cells is activated by attachment to Pathogen-associated molecular pattern
Pathogen-associated molecular pattern
Pathogen-associated molecular patterns, or PAMPs, are molecules associated with groups of pathogens, that are recognized by cells of the innate immune system. These molecules can be referred to as small molecular motifs conserved within a class of microbes...
s (PAMPS), which leads to NF-κB activation. Opsonin
Opsonin
An opsonin is any molecule that targets an antigen for an immune response. However, the term is usually used in reference to molecules that act as a binding enhancer for the process of phagocytosis, especially antibodies, which coat the negatively-charged molecules on the membrane. Molecules that...
s such as C3b
C3b
C3b is the larger of two elements formed by the cleavage of complement component 3. C3b covalently bonds to microbial cell surfaces within an organism's body. This leads to the production of surface-bound C3 convertase and thus more C3b components. Bound C3b also aids in opsonization of the microbe...
and antibodies
Antibody
An antibody, also known as an immunoglobulin, is a large Y-shaped protein used by the immune system to identify and neutralize foreign objects such as bacteria and viruses. The antibody recognizes a unique part of the foreign target, termed an antigen...
can act as attachment sites and aid phagocytosis of pathogens.

Engulfment of material is facilitated by the actin-myosin contractile system. The phagosome of ingested material is then fused with the lysosome, leading to degradation.

Degradation can be oxygen-dependent or oxygen-independent.

It is possible for cells other than dedicated phagocyte
Phagocyte
Phagocytes are the white blood cells that protect the body by ingesting harmful foreign particles, bacteria, and dead or dying cells. Their name comes from the Greek phagein, "to eat" or "devour", and "-cyte", the suffix in biology denoting "cell", from the Greek kutos, "hollow vessel". They are...
s (such as dendritic cell
Dendritic cell
Dendritic cells are immune cells forming part of the mammalian immune system. Their main function is to process antigen material and present it on the surface to other cells of the immune system. That is, dendritic cells function as antigen-presenting cells...
s) to engage in phagocytosis.

Following apoptosis
Apoptosis
Apoptosis is the process of programmed cell death that may occur in multicellular organisms. Biochemical events lead to characteristic cell changes and death. These changes include blebbing, cell shrinkage, nuclear fragmentation, chromatin condensation, and chromosomal DNA fragmentation...
, the dying cells need to be taken up into the surrounding tissues by macrophages in a process called Efferocytosis
Efferocytosis
In cell biology, efferocytosis is the process by which apoptotic cells are removed by phagocytic cells...
. One of the features of an apoptotic cell is the presentation of a variety of intracellular molecules on the cell surface, such as Calreticulin
Calreticulin
Calreticulin also known as calregulin, CRP55, CaBP3, calsequestrin-like protein, and endoplasmic reticulum resident protein 60 is a protein that in humans is encoded by the CALR gene....
, Phosphatidylserine
Phosphatidylserine
Phosphatidylserine is a phospholipid component, usually kept on the inner-leaflet of cell membranes by an enzyme called flippase...
(From the inner layer of the plasma membrane), Annexin A1
Annexin A1
Annexin A1 also known as lipocortin I is a protein that in humans is encoded by the ANXA1 gene.- Function :Annexin I belongs to the annexin family of Ca2+-dependent phospholipid-binding proteins that have a molecular weight of approximately 35,000 to 40,000 and are preferentially located on the...
, and oxidised LDL.
These molecules are recognised by receptors on the cell surface of the macrophage such as the Phosphatidylserine Receptor, or by soluble (free floating) receptors such as Thrombospondin 1
Thrombospondin 1
Thrombospondin 1, also known as THBS1, is a protein that in humans in encoded by the THBS1 gene.Thrombospondin 1 is a subunit of a disulfide-linked homotrimeric protein. This protein is an adhesive glycoprotein that mediates cell-to-cell and cell-to-matrix interactions. This protein can bind to...
, Gas-6, and MFG-E8, which themselves, then, bind to other receptors on the macrophage such as CD36
CD36
CD36 is an integral membrane protein found on the surface of many cell types in vertebrate animals and is also known as FAT, SCARB3, GP88, glycoprotein IV and glycoprotein IIIb . CD36 is a member of the class B scavenger receptor family of cell surface proteins...
and Alpha-V Beta-3 Integrin
Alpha-v beta-3
αVβ3 is a type of integrin that is a receptor for vitronectin. It consists of two components, integrin alpha V and integrin beta 3 , and is expressed by platelets. Furthermore it is a receptor for phagocytosis on macrophages or dendritic cells....
.
Additional information on phagocytosis of apoptotic cells could be found in the book: “Phagocytosis of dying cells: from molecular mechanisms to human diseases” (Eds DV Krysko and P Vandenabeele, 2009, Springer).

In many protist
Protist
Protists are a diverse group of eukaryotic microorganisms. Historically, protists were treated as the kingdom Protista, which includes mostly unicellular organisms that do not fit into the other kingdoms, but this group is contested in modern taxonomy...
s, phagocytosis is used as a means of feeding, providing part or all of their nourishment. This is called phagotrophic nutrition, as distinguished from osmotrophic nutrition, which takes place by absorption.

The resulting phagosome
Phagosome
In cell biology, a phagosome is a vacuole formed around a particle absorbed by phagocytosis. The vacuole is formed by the fusion of the cell membrane around the particle. A phagosome is a cellular compartment in which pathogenic microorganisms can be killed and digested...
may be merged with lysosome
Lysosome
thumb|350px|Schematic of typical animal cell, showing subcellular components. [[Organelle]]s: [[nucleoli]] [[cell nucleus|nucleus]] [[ribosomes]] [[vesicle |vesicle]] rough [[endoplasmic reticulum]]...
s containing digestive enzyme
Enzyme
Enzymes are proteins that catalyze chemical reactions. In enzymatic reactions, the molecules at the beginning of the process, called substrates, are converted into different molecules, called products. Almost all chemical reactions in a biological cell need enzymes in order to occur at rates...
s, forming a phagolysosome
Phagolysosome
A phagolysosome is the membrane-enclosed organelle which forms when a phagosome fuses with a lysosome. After fusion, the food particles or pathogens contained within the phagosome are usually digested by the enzymes contained within the lysosome. Phagolysosome formation follows phagocytosis...
. The food particles will then be digested, and the released nutrients are diffused or transported into the cytosol
Cytosol
The cytosol or intracellular fluid is the liquid found inside cells, that is separated into compartments by membranes. For example, the mitochondrial matrix separates the mitochondrion into compartments....
for use in other metabolic processes.