What happens to a lysosome when it digests the dead cell? Does it just die on its own?

Why are lysosomes important?

What is the role of enzymes inside a lysosome

What advantage protein digesting enzyme has and the products being absorbed to the developing frog.explain. Suggest one other type of digstive enzyme...

What advantage protein digesting enzyme has and the products being absorbed to the developing frog.explain. Suggest one other type of digstive enzyme...

How would a cell be affected if one of its lysosomes were ruptured?
More

How does the lysosomal affects cell death
More 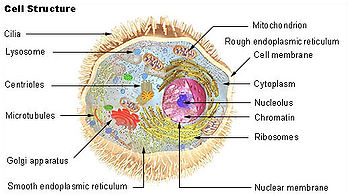 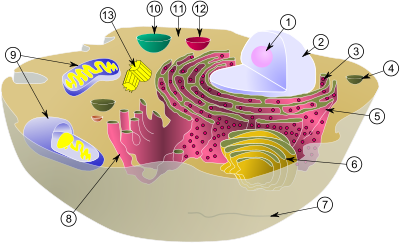 The size of lysosomes varies from 0.1–1.2 μm
Micrometre
A micrometer , is by definition 1×10-6 of a meter .In plain English, it means one-millionth of a meter . Its unit symbol in the International System of Units is μm...
. At pH
PH
In chemistry, pH is a measure of the acidity or basicity of an aqueous solution. Pure water is said to be neutral, with a pH close to 7.0 at . Solutions with a pH less than 7 are said to be acidic and solutions with a pH greater than 7 are basic or alkaline...
4.8, the interior of the lysosomes is acidic compared to the slightly alkaline cytosol
Cytosol
The cytosol or intracellular fluid is the liquid found inside cells, that is separated into compartments by membranes. For example, the mitochondrial matrix separates the mitochondrion into compartments....
(pH 7.2). The lysosome maintains this pH differential by pumping proton
Proton
The proton is a subatomic particle with the symbol or and a positive electric charge of 1 elementary charge. One or more protons are present in the nucleus of each atom, along with neutrons. The number of protons in each atom is its atomic number....
s (H+ ions) from the cytosol across the membrane
Cell membrane
The cell membrane or plasma membrane is a biological membrane that separates the interior of all cells from the outside environment. The cell membrane is selectively permeable to ions and organic molecules and controls the movement of substances in and out of cells. It basically protects the cell...
via proton pump
Proton pump
A proton pump is an integral membrane protein that is capable of moving protons across a cell membrane, mitochondrion, or other organelle. Mechanisms are based on conformational changes of the protein structure or on the Q cycle.-Function:...
s and chloride ion channel
Ion channel
Ion channels are pore-forming proteins that help establish and control the small voltage gradient across the plasma membrane of cells by allowing the flow of ions down their electrochemical gradient. They are present in the membranes that surround all biological cells...
s. The lysosomal membrane protects the cytosol, and therefore the rest of the cell
Cell (biology)
The cell is the basic structural and functional unit of all known living organisms. It is the smallest unit of life that is classified as a living thing, and is often called the building block of life. The Alberts text discusses how the "cellular building blocks" move to shape developing embryos....
, from the degradative enzyme
Degradative enzyme
Degradative enzyme is an enzyme which degrades biological molecules. Some examples of degradative enzymes:*Lipase, which digests lipids,*Carbohydrases, which digest carbohydrates ,*Proteases, which digest proteins,...
s within the lysosome. The cell is additionally protected from any lysosomal acid hydrolases that drain into the cytosol, as these enzymes are pH-sensitive and do not function well or at all in the alkaline environment of the cytosol.This ensures that cytosolic molecules and organelles are not lysed in case there is leakage of the hydrolytic enzymes from the lysosome.

Some important enzymes found within lysosomes include:


Lysosomal enzymes are synthesized in the cytoplasm and the endoplasmic reticulum
Endoplasmic reticulum
The endoplasmic reticulum is an organelle of cells in eukaryotic organisms that forms an interconnected network of tubules, vesicles, and cisternae...
, where they receive a mannose-6-phosphate
Mannose
Mannose is a sugar monomer of the aldohexose series of carbohydrates. Mannose is a C-2 epimer of glucose. It is not part of human metabolism, but is a component of microbial cell walls, and is therefore a target of the immune system and also of antibiotics....
tag that targets them for the lysosome . Aberrant lysosomal targeting causes inclusion-cell disease, whereby enzymes do not properly reach the lysosome, resulting in accumulation of waste within these organelles.

Other functions include digesting foreign bacteria (or other forms of waste) that invade a cell and helping repair damage to the plasma membrane by serving as a membrane patch, sealing the wound. In the past, lysosomes were thought to kill cells that are no longer wanted, such as those in the tails of tadpole
Tadpole
A tadpole or polliwog is the wholly aquatic larval stage in the life cycle of an amphibian, particularly that of a frog or toad.- Appellation :...
s or in the web from the fingers of a 3- to 6-month-old fetus
Fetus
A fetus is a developing mammal or other viviparous vertebrate after the embryonic stage and before birth.In humans, the fetal stage of prenatal development starts at the beginning of the 11th week in gestational age, which is the 9th week after fertilization.-Etymology and spelling variations:The...
.

There are a number of lysosomal storage diseases that are caused by the malfunction of the lysosomes or one of their digestive proteins; examples include Niemann Pick Type C, Tay-Sachs disease
Tay-Sachs disease
Tay–Sachs disease is an autosomal recessive genetic disorder...
and Pompe's disease. These diseases are caused by a defective or missing digestive protein, which leads to the accumulation of substrates within the cell, impairing metabolism
Metabolism
Metabolism is the set of chemical reactions that happen in the cells of living organisms to sustain life. These processes allow organisms to grow and reproduce, maintain their structures, and respond to their environments. Metabolism is usually divided into two categories...
.

In the broad sense, these can be classified as mucopolysaccharidoses
Mucopolysaccharidosis
Mucopolysaccharidoses are a group of metabolic disorders caused by the absence or malfunctioning of lysosomal enzymes needed to break down molecules called glycosaminoglycans - long chains of sugar carbohydrates in each of our cells that help build bone, cartilage, tendons, corneas, skin and...
, GM2 gangliosidoses, lipid storage disorder
Lipid storage disorder
Lipid storage disorders are a group of inherited metabolic disorders in which harmful amounts of lipids accumulate in some of the body’s cells and tissues. People with these disorders either do not produce enough of one of the enzymes needed to metabolize lipids or they produce enzymes that do...
s, glycoproteinoses
Glycoproteinosis
Glycoproteinosis are lysosomal storage diseases affecting glycoproteins, resulting from defects in lysosomal function. The term is sometimes reserved for conditions involving degradation of glycoproteins.-Types:...
, mucolipidoses
Mucolipidosis
Mucolipidosis is a group of inherited metabolic disorders that affect the body's ability to carry out the normal turnover of various materials within cells....
, or leukodystrophies
Leukodystrophy
Leukodystrophy refers to a group of disorders characterized by dysfunction of the white matter of the brain. The leukodystrophies are caused by imperfect growth or development of the myelin sheath, the fatty covering that acts as an insulator around nerve fibers...
.

Weak bases
Base (chemistry)
For the term in genetics, see base A base in chemistry is a substance that can accept hydrogen ions or more generally, donate electron pairs. A soluble base is referred to as an alkali if it contains and releases hydroxide ions quantitatively...
with lipophilic properties accumulate in acidic intracellular compartments like lysosomes. While the plasma and lysosomal membranes are permeable for neutral and uncharged species of weak bases, the charged protonated species of weak bases do not permeate biomembranes and accumulate within lysosomes. The concentration within lysosomes may reach levels 100 to 1000 fold higher than extracellular concentrations. This phenomenon is called "lysosomotropism" or "acid trapping". The amount of accumulation of lysosomotropic compounds may be estimated using a cell based mathematical model.

A significant part of the clinically approved drugs are lipophilic weak bases with lysosomotropic properties. This explaines a number of pharmacological properties of these drugs, such as high tissue-to-blood concentration gradients or long tissue elimination half-lifes; these properties have been found for drugs such as haloperidol
Haloperidol
Haloperidol is a typical antipsychotic. It is in the butyrophenone class of antipsychotic medications and has pharmacological effects similar to the phenothiazines....
, levomepromazine
Levomepromazine
Levomepromazine in Germany and Methotrimeprazine in America is an aliphatic phenothiazine neuroleptic drug...
and amantadine
Amantadine
Amantadine is the organic compound known formally as 1-adamantylamine or 1-aminoadamantane. The molecule consists of adamantane backbone that has an amino group substituted at one of the four methyne positions. This pharmaceutical is sold under the name Symmetrel for use both as an antiviral and an...
. However, in addition to lysosomotropism, high tissue concentrations and long elimination half-life is explained also by lipophilicity and absorption of drugs to fatty tissue structures. Important lysosomal enzymes, such as acid sphingomyelinase, may be inhibited by lysososomally accumulated drugs. Such compounds are termed FIASMAs (functional inhibitor of acid sphingomyelinase) and include for example fluoxetine
Fluoxetine
Fluoxetine is an antidepressant of the selective serotonin reuptake inhibitor class. It is manufactured and marketed by Eli Lilly and Company...
, sertraline
Sertraline
Sertraline hydrochloride is an antidepressant of the selective serotonin reuptake inhibitor class. It was introduced to the market by Pfizer in 1991. Sertraline is primarily used to treat major depression in adult outpatients as well as obsessive–compulsive, panic, and social anxiety disorders in...
or amitriptyline
Amitriptyline
Amitriptyline is a tricyclic antidepressant . It is the most widely used TCA and has at least equal efficacy against depression as the newer class of SSRIs...
.