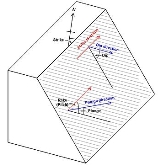 Overview
Structural geology is the study of the three-dimensional distribution of rock
Rock (geology)
In geology, rock or stone is a naturally occurring solid aggregate of minerals and/or mineraloids.The Earth's outer solid layer, the lithosphere, is made of rock. In general rocks are of three types, namely, igneous, sedimentary, and metamorphic...
units with respect to their deformational histories. The primary goal of structural geology is to use measurements of present-day rock geometries to uncover information about the history of deformation (strain
Deformation (mechanics)
Deformation in continuum mechanics is the transformation of a body from a reference configuration to a current configuration. A configuration is a set containing the positions of all particles of the body...
) in the rocks, and ultimately, to understand the stress field
Stress field
A stress field is a region in a body for which the stress is defined at every point. Stress fields are widely used in fluid dynamics and materials science....
that resulted in the observed strain and geometries. This understanding of the dynamics of the stress field can be linked to important events in the regional geologic past; a common goal is to understand the structural evolution of a particular area with respect to regionally widespread patterns of rock deformation (e.g., mountain building
Orogeny
Orogeny refers to forces and events leading to a severe structural deformation of the Earth's crust due to the engagement of tectonic plates. Response to such engagement results in the formation of long tracts of highly deformed rock called orogens or orogenic belts...
, rift
Rift
In geology, a rift or chasm is a place where the Earth's crust and lithosphere are being pulled apart and is an example of extensional tectonics....
ing) due to plate tectonics
Plate tectonics
Plate tectonics is a scientific theory that describes the large scale motions of Earth's lithosphere...
.
The study of geologic structures has been of prime importance in economic geology
Economic geology
Economic geology is concerned with earth materials that can be used for economic and/or industrial purposes. These materials include precious and base metals, nonmetallic minerals, construction-grade stone, petroleum minerals, coal, and water. The term commonly refers to metallic mineral deposits...
, both petroleum geology
Petroleum geology
Petroleum geology refers to the specific set of geological disciplines that are applied to the search for hydrocarbons .-Sedimentary basin analysis:...
and mining geology
Mining
Mining is the extraction of valuable minerals or other geological materials from the earth, from an ore body, vein or seam. The term also includes the removal of soil. Materials recovered by mining include base metals, precious metals, iron, uranium, coal, diamonds, limestone, oil shale, rock...
.