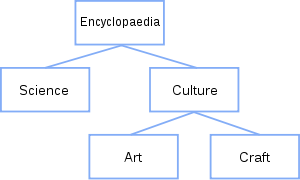 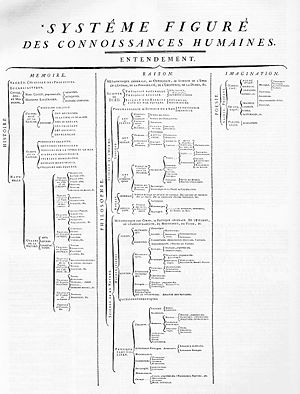 A tree structure is a way of representing the hierarchical
Hierarchy
A hierarchy is an arrangement of items in which the items are represented as being "above," "below," or "at the same level as" one another...
nature of a structure
Structure
Structure is a fundamental, tangible or intangible notion referring to the recognition, observation, nature, and permanence of patterns and relationships of entities. This notion may itself be an object, such as a built structure, or an attribute, such as the structure of society...
in a graphical form. It is named a "tree structure" because the classic representation resembles a tree
Tree
A tree is a perennial woody plant. It is most often defined as a woody plant that has many secondary branches supported clear of the ground on a single main stem or trunk with clear apical dominance. A minimum height specification at maturity is cited by some authors, varying from 3 m to...
, even though the chart is generally upside down compared to an actual tree, with the "root" at the top and the "leaves" at the bottom.

Every finite tree structure has a member that has no superior
Superior (hierarchy)
In a hierarchy or tree structure of any kind, a superior is an individual or position at a higher level in the hierarchy than another , and thus closer to the apex. It is often used in business terminology to refer to people who are supervisors and in the military to people who are higher in the...
. This member is called the "root" or root node. It can be thought of as the starting node. The converse is not true: infinite tree structures may or may not have a root node.

The lines connecting elements are called "branches", the elements themselves are called "node
Node (computer science)
A node is a record consisting of one or more fields that are links to other nodes, and a data field. The link and data fields are often implemented by pointers or references although it is also quite common for the data to be embedded directly in the node. Nodes are used to build linked, often...
s".
Nodes without children are called leaf nodes, "end-nodes", or "leaves".

The names of relationships between nodes are modeled after family relations. The gender-neutral names "parent" and "child" have largely displaced the older "father" and "son" terminology, although the term "uncle" is still used for other nodes at the same level as the parent.

Tree structures are used to depict all kinds of taxonomic
Taxonomy
Taxonomy is the science of identifying and naming species, and arranging them into a classification. The field of taxonomy, sometimes referred to as "biological taxonomy", revolves around the description and use of taxonomic units, known as taxa...
knowledge, such as family tree
Family tree
A family tree, or pedigree chart, is a chart representing family relationships in a conventional tree structure. The more detailed family trees used in medicine, genealogy, and social work are known as genograms.-Family tree representations:...
s, the biological evolutionary tree, the evolutionary tree of a language family, the grammatical structure of a language (a key example being S → NP VP, meaning a sentence is a noun phrase and a verb phrase, with each in turn having other components which have other components), the way web pages are logically ordered in a web site, mathematical trees of integer sets
Tree of primitive Pythagorean triples
In mathematics, a Pythagorean triple is a set of three positive integers a, b, and c having the property that they can be respectively the two legs and the hypotenuse of a right triangle, thus satisfying the equation a^2+b^2=c^2; the triple is said to be primitive if and only if a, b, and c share...
, et cetera.

In a tree structure there is one and only one path
Path (graph theory)
In graph theory, a path in a graph is a sequence of vertices such that from each of its vertices there is an edge to the next vertex in the sequence. A path may be infinite, but a finite path always has a first vertex, called its start vertex, and a last vertex, called its end vertex. Both of them...
from any point to any other point. 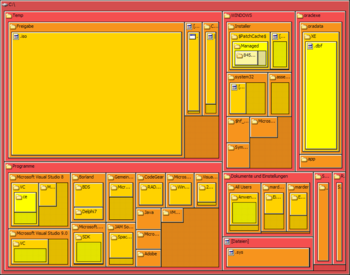 There are many ways of visually representing tree structures.
Almost always, these boil down to variations, or combinations,
of a few basic styles:

Classical node-link diagrams, that connect nodes together with line segments:

Nested sets
Nested set model
The nested set model is a particular technique for representing nested sets in relational databases.The term was apparently introduced by Joe Celko; others describe the same technique without naming it or using different terms...
that use enclosure/containment to show parenthood, examples include TreeMaps
Treemapping
In information visualization and computing, treemapping is a method for displaying hierarchical data by using nested rectangles.- Main idea :...
and fractal maps:

Layered "icicle" diagrams that use alignment/adjacency:

Lists or diagrams that use indentation, sometimes called "outlines" or "tree view
Tree view
A tree view or an outline view is a graphical user interface element that presents a hierarchical view of information. Each item can have a number of subitems...
s":


Also, trees can be represented radially
Radial tree
A radial tree, or "radial map", is a method of displaying a tree structure in a way that expands outwards, radially. It is one of many ways to visually display a tree., with examples extending back to the early 20th century...
.

Identification of some of the basic styles of tree structures can be found in: