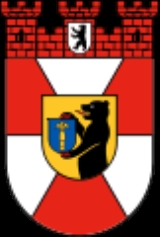 
Mitte is the first and most central borough
Boroughs and localities of Berlin
Berlin is both a city and one of Germany’s federal states. It is made up of twelve boroughs , each with its own borough government, though all boroughs are subject to Berlin’s city and state government.-History:Each borough is made up of several officially recognized localities...
of Berlin
Berlin
Berlin is the capital city of Germany and is one of the 16 states of Germany. With a population of 3.45 million people, Berlin is Germany's largest city. It is the second most populous city proper and the seventh most populous urban area in the European Union...
. It was created in Berlin's 2001 administrative reform by the merger of the former districts of Mitte
Mitte (locality)
Mitte is a central locality of Berlin in the homonymous district of Mitte. Until 2001 it was itself an autonomous district....
proper, Tiergarten
Tiergarten
Tiergarten is a locality within the borough of Mitte, in central Berlin . Notable for the great and homonymous urban park, before German reunification, it was a part of West Berlin...
and Wedding
Wedding (Berlin)
Wedding is a locality in the borough of Mitte, Berlin, Germany and was a separate borough in the north-western inner city until it was fused with Tiergarten and Mitte in Berlin's 2001 administrative reform...
; the resulting borough retained the name Mitte. It is one of the two boroughs (beside Friedrichshain-Kreuzberg
Friedrichshain-Kreuzberg
Friedrichshain-Kreuzberg is the second borough of Berlin, formed in 2001 by merging the former East Berlin borough of Friedrichshain and the former West Berlin borough of Kreuzberg...
) which comprises former West
West Berlin
West Berlin was a political exclave that existed between 1949 and 1990. It comprised the western regions of Berlin, which were bordered by East Berlin and parts of East Germany. West Berlin consisted of the American, British, and French occupation sectors, which had been established in 1945...
and East Berlin
East Berlin
East Berlin was the name given to the eastern part of Berlin between 1949 and 1990. It consisted of the Soviet sector of Berlin that was established in 1945. The American, British and French sectors became West Berlin, a part strongly associated with West Germany but a free city...
districts. Mitte encompasses Berlin's historic core and includes some of the most important tourist sites of Berlin like Museum Island
Museum Island
Museum Island is the name of the northern half of an island in the Spree river in the central Mitte district of Berlin, Germany, the site of the old city of Cölln...
, Brandenburg Gate
Brandenburg Gate
The Brandenburg Gate is a former city gate and one of the most well-known landmarks of Berlin and Germany. It is located west of the city centre at the junction of Unter den Linden and Ebertstraße, immediately west of the Pariser Platz. It is the only remaining gate of a series through which...
, Unter den Linden
Unter den Linden
Unter den Linden is a boulevard in the Mitte district of Berlin, the capital of Germany. It is named for its linden trees that line the grassed pedestrian mall between two carriageways....
, Potsdamer Platz
Potsdamer Platz
Potsdamer Platz is an important public square and traffic intersection in the centre of Berlin, Germany, lying about one kilometre south of the Brandenburg Gate and the Reichstag , and close to the southeast corner of the Tiergarten park...
, the Reichstag and Berlin Hauptbahnhof
Berlin Hauptbahnhof
' , is the main railway station in Berlin, Germany. It began full operation two days after a ceremonial opening on 26 May 2006. It is located on the site of the historic Lehrter Bahnhof, and until it opened as a main line station, it was a stop on the Berlin S-Bahn suburban railway temporarily...
, most of which were in former East Berlin.

Note that when Berliners speak of Mitte, they usually refer to the smaller locality and not to the larger borough.

Mitte (German
German language
German is a West Germanic language, related to and classified alongside English and Dutch. With an estimated 90 – 98 million native speakers, German is one of the world's major languages and is the most widely-spoken first language in the European Union....
for "middle", "centre") is located in the centre of Berlin along the Spree
Spree
The Spree is a river that flows through the Saxony, Brandenburg and Berlin states of Germany, and in the Ústí nad Labem region of the Czech Republic...
River. It borders on Charlottenburg-Wilmersdorf
Charlottenburg-Wilmersdorf
Charlottenburg-Wilmersdorf is the fourth borough of Berlin, formed in the 2001 administrative reform by merging the former boroughs of Charlottenburg and Wilmersdorf.-Overview:Charlottenburg-Wilmersdorf covers the western centre of the City of Berlin...
in the west, Reinickendorf
Reinickendorf
Reinickendorf is the twelfth borough of Berlin. It encompasses the northwest of the city area, including the Berlin-Tegel Airport, Lake Tegel, spacious settlements of detached houses as well as housing estates like Märkisches Viertel.-Subdivision:...
in the north, Pankow
Pankow
Pankow is the third borough of Berlin. In Berlin's 2001 administrative reform it was merged with the former boroughs of Prenzlauer Berg and Weißensee; the resulting borough retained the name Pankow.- Overview :...
in the east, Friedrichshain-Kreuzberg
Friedrichshain-Kreuzberg
Friedrichshain-Kreuzberg is the second borough of Berlin, formed in 2001 by merging the former East Berlin borough of Friedrichshain and the former West Berlin borough of Kreuzberg...
in the southeast, and Tempelhof-Schöneberg
Tempelhof-Schöneberg
Tempelhof-Schöneberg is the seventh borough of Berlin, formed in 2001 by merging the former boroughs of Tempelhof and Schöneberg.-Geography:...
in the southwest.

In the middle of the Spree lies Museum Island (Museumsinsel) with its museums and Berlin Cathedral (Berliner Dom). The central square in Mitte is Alexanderplatz
Alexanderplatz
Alexanderplatz is a large public square and transport hub in the central Mitte district of Berlin, near the Fernsehturm. Berliners often call it simply Alex, referring to a larger neighborhood stretching from Mollstraße in the northeast to Spandauer Straße and the City Hall in the southwest.-Early...
with the prominent Fernsehturm (TV tower), Germany's highest building, and the large railway station with connections to many subway (U-Bahn
Berlin U-Bahn
The Berlin is a rapid transit railway in Berlin, the capital city of Germany, and is a major part of the public transport system of that city. Opened in 1902, the serves 173 stations spread across ten lines, with a total track length of , about 80% of which is underground...
), tramway (Straßenbahn), city trains (S-Bahn) and buses. There are some important streets which connect Mitte with the other boroughs, e.g. the boulevard Unter den Linden which connects Alexanderplatz to the west with Brandenburg Gate and runs further as Straße des 17. Juni
Straße des 17. Juni
The Straße des 17. Juni is a street in central Berlin, the capital of Germany. It is the western continuation of the Unter den Linden. It runs east-west through the Tiergarten, a large forest park to the west of the city centre. At the eastern end is the Brandenburg Gate and at the western end is...
to the Victory Column
Berlin Victory Column
The Victory Column is a monument in Berlin, Germany. Designed by Heinrich Strack after 1864 to commemorate the Prussian victory in the Danish-Prussian War, by the time it was inaugurated on 2 September 1873, Prussia had also defeated Austria in the Austro-Prussian War and France in the...
and the centre of former West Berlin in Charlottenburg
Charlottenburg
Charlottenburg is a locality of Berlin within the borough of Charlottenburg-Wilmersdorf, named after Queen consort Sophia Charlotte...
, or Karl-Marx-Allee
Karl-Marx-Allee
The Karl-Marx-Allee is a monumental socialist boulevard built by the GDR between 1952 and 1960 in Berlin Friedrichshain and Mitte. Today the boulevard is named after Karl Marx....
from Alexanderplatz to Friedrichshain
Friedrichshain
Friedrichshain is a part of Berlin's borough of Friedrichshain-Kreuzberg, and like Kreuzberg across the river it has its own distinct character, with the result that the new double name is hardly ever used outside government administration. From its creation in 1920 until Berlin's 2001...
and the eastern suburbs.

The former Mitte district had been established by the 1920 Greater Berlin Act
Greater Berlin Act
The Greater Berlin Act , in full the Law Regarding the Reconstruction of the New Local Authority of Berlin , was a law passed by the Prussian government in 1920 that greatly expanded the size of the German capital of Berlin.-History:...
and comprised large parts of the historic city around Alt-Berlin
Alt-Berlin
Alt-Berlin , also named Altberlin, is a neighbourhood , situated in the Berliner locality of Mitte, part of the homonymous borough. In the 13th century it was the sister town of the old Cölln, located on the northern Spree Island in the Margraviate of Brandenburg...
and Cölln
Cölln
In the 13th century Cölln was the sister town of Old Berlin , located on the southern Spree Island in the Margraviate of Brandenburg. Today the island is located in the historic core of the central Mitte locality of modern Berlin...
. Brandenburg Gate was the western exit at the Berlin city boundary until 1861.

Between 1961 and 1990, Mitte was the central part of East Berlin, however at the same time it was surrounded by the Berlin Wall
Berlin Wall
The Berlin Wall was a barrier constructed by the German Democratic Republic starting on 13 August 1961, that completely cut off West Berlin from surrounding East Germany and from East Berlin...
at its north, south and west. There were some border control points, the most famous of which was Checkpoint Charlie
Checkpoint Charlie
Checkpoint Charlie was the name given by the Western Allies to the best-known Berlin Wall crossing point between East Berlin and West Berlin during the Cold War....
between Kreuzberg and Mitte, which was operated by the United States Army
United States Army
The United States Army is the main branch of the United States Armed Forces responsible for land-based military operations. It is the largest and oldest established branch of the U.S. military, and is one of seven U.S. uniformed services...
and its allies and was open to foreigners and diplomats. Two other checkpoints were at Heinrich-Heine-Straße/Prinzenstraße east of Checkpoint Charlie, open to citizens of West Germany and West Berlin and on Invalidenstraße
Invalidenstraße
The Invalidenstraße is a street in Berlin, Germany. It runs east to west for through the districts of Mitte and Moabit. The street originally connected three important railway stations in the northern city centre: the Stettiner Bahnhof , the Hamburger Bahnhof and the Lehrter Bahnhof, the...
in the north on the border with the West Berlin Tiergarten district (the present-day Moabit
Moabit
Moabit is an inner city locality of Berlin. Since Berlin's 2001 administrative reform it belongs to the newly regrouped governmental borough of Mitte. Previously, from 1920 to 2001, it belonged to the borough of Tiergarten. Moabit's borders are defined by three watercourses, the Spree, the...
locality).

The present-day borough of Mitte consists of six localities:

As of 2010, the district had a population of 322,919, of whom 144.000 (44.5%) had a migration background. In the former West Berlin areas of Wedding, Gesundbrunnen and Moabit, foreigners and Germans of foreign origin compose nearly 70% of the population, while in Mitte proper the share of migrants is relatively low. The immigrant community is quite diverse, however, Middle Easterners (e.g. Turks, Arabs etc.), Africans, Eastern Europe
Eastern Europe
Eastern Europe is the eastern part of Europe. The term has widely disparate geopolitical, geographical, cultural and socioeconomic readings, which makes it highly context-dependent and even volatile, and there are "almost as many definitions of Eastern Europe as there are scholars of the region"...
ans and East Asia
East Asia
East Asia or Eastern Asia is a subregion of Asia that can be defined in either geographical or cultural terms...
ns form the largest groups.