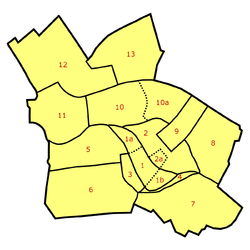 Alexanderplatz is a large public square
Town square
A town square is an open public space commonly found in the heart of a traditional town used for community gatherings. Other names for town square are civic center, city square, urban square, market square, public square, and town green.Most town squares are hardscapes suitable for open markets,...
and transport hub in the central Mitte
Mitte (locality)
Mitte is a central locality of Berlin in the homonymous district of Mitte. Until 2001 it was itself an autonomous district....
district of Berlin
Berlin
Berlin is the capital city of Germany and is one of the 16 states of Germany. With a population of 3.45 million people, Berlin is Germany's largest city. It is the second most populous city proper and the seventh most populous urban area in the European Union...
, near the Fernsehturm. Berliners often call it simply Alex, referring to a larger neighborhood stretching from Mollstraße in the northeast to Spandauer Straße and the City Hall
Rotes Rathaus
The Red City Hall is the town hall of Berlin, located in the Mitte district on Rathausstraße near Alexanderplatz. It is the home to the governing mayor and the government of the Federal state of Berlin...
in the southwest.

Originally a cattle market outside the city fortifications, it was named in honor of a visit of the Russian
Russian Empire
The Russian Empire was a state that existed from 1721 until the Russian Revolution of 1917. It was the successor to the Tsardom of Russia and the predecessor of the Soviet Union...
Emperor Alexander I
Alexander I of Russia
Alexander I of Russia , served as Emperor of Russia from 23 March 1801 to 1 December 1825 and the first Russian King of Poland from 1815 to 1825. He was also the first Russian Grand Duke of Finland and Lithuania....
to Berlin on 25 October 1805 by order of King Frederick William III of Prussia
Frederick William III of Prussia
Frederick William III was king of Prussia from 1797 to 1840. He was in personal union the sovereign prince of the Principality of Neuchâtel .-Early life:...
. The square gained a prominent role in the late 19th century with the construction of the Stadtbahn station of the same name and a nearby market hall, followed by the opening of a department store of Hermann Tietz
Hermann Tietz
Hermann Tietz was a German merchant of Jewish origin. Tietz was born on April 29, 1837 in Birnbaum an der Warthe near Posen and died on May 3, 1907 in Berlin)...
in 1904, becoming a major commercial center. The U-Bahn
Berlin U-Bahn
The Berlin is a rapid transit railway in Berlin, the capital city of Germany, and is a major part of the public transport system of that city. Opened in 1902, the serves 173 stations spread across ten lines, with a total track length of , about 80% of which is underground...
station of the present-day U2
U2 (Berlin U-Bahn)
U2 is a line on the Berlin U-Bahn. The U2 line starts at the Pankow urban rail station, runs through the eastern city centre to Potsdamer Platz, the western city centre and finally to the Ruhleben terminal station.The U2 has 29 stations and a length of...
line opened on 1 July 1913.

Its heyday was in the 1920s, when together with Potsdamer Platz
Potsdamer Platz
Potsdamer Platz is an important public square and traffic intersection in the centre of Berlin, Germany, lying about one kilometre south of the Brandenburg Gate and the Reichstag , and close to the southeast corner of the Tiergarten park...
it was at the heart of Berlin's nightlife, inspiring the 1929 novel
Novel
A novel is a book of long narrative in literary prose. The genre has historical roots both in the fields of the medieval and early modern romance and in the tradition of the novella. The latter supplied the present generic term in the late 18th century....
Berlin Alexanderplatz
Berlin Alexanderplatz
Berlin Alexanderplatz is a novel by Alfred Döblin, published in 1929. The story concerns a small-time criminal, Franz Biberkopf, fresh from prison, who is drawn into the underworld. When his criminal mentor murders the prostitute whom Biberkopf has been relying on as an anchor, he realizes that...
(see 1920s Berlin
1920s Berlin
The Golden Twenties in Berlin was a vibrant period in the history of Berlin, German history, and European history in general.-Weimar culture:...
) and the two film
Film
A film, also called a movie or motion picture, is a series of still or moving images. It is produced by recording photographic images with cameras, or by creating images using animation techniques or visual effects...
s based thereon, Piel Jutzi's 1931 film and Rainer Werner Fassbinder
Rainer Werner Fassbinder
Rainer Werner Maria Fassbinder was a German movie director, screenwriter and actor. He is considered one of the most important representatives of the New German Cinema.He maintained a frenetic pace in film-making...
's 15½ hour second adaptation
Berlin Alexanderplatz (television)
Berlin Alexanderplatz, originally broadcast in 1980, is a 14-part television film adapted and directed by Rainer Werner Fassbinder from the Alfred Döblin novel of the same name, and stars Günter Lamprecht, Hanna Schygulla, Barbara Sukowa, Elisabeth Trissenaar and Gottfried John...
, released in 1980. About 1920 the city's authorities started a rearrangement of the increasing traffic flows laying out a roundabout, accompanied by two buildings along the Stadtbahn viaduct, Alexanderhaus and Berolinahaus finished in 1932 according to plans designed by Peter Behrens
Peter Behrens
Peter Behrens was a German architect and designer. He was important for the modernist movement, as several of the movements leading names worked for him when they were young.-Biography:Behrens attended the Christianeum Hamburg from September 1877 until Easter 1882...
.

Alexanderplatz has been subject to redevelopment several times in its history, most recently during the 1960s, when it was turned into a pedestrian zone and enlarged as part of the German Democratic Republic's redevelopment of the city center. It is surrounded by several notable structures including the Fernsehturm (TV Tower), the second tallest structure in Europe
Europe
Europe is, by convention, one of the world's seven continents. Comprising the westernmost peninsula of Eurasia, Europe is generally 'divided' from Asia to its east by the watershed divides of the Ural and Caucasus Mountains, the Ural River, the Caspian and Black Seas, and the waterways connecting...
.

Due to its high profile, many newcomers to Berlin mistake the nickname Alex and apply it to the Fernsehturm instead. Alex also accommodates the Park Inn Berlin
Park Inn Berlin
The Park Inn by Radisson Berlin Alexanderplatz is the tallest building and the eleventh tallest structure in Berlin and the 29th tallest building and tallest hotel-only building in Germany...
and the World Time Clock
World clock
A world clock, often called a "Worldtime Clock", is a clock which displays the time for many places around the world.The display can take various forms:...
, a continually rotating installation that shows the time throughout the globe, and Hermann Henselmann
Hermann Henselmann
Hermann Henselmann was a German architect most famous for his buildings constructed in East Germany during the 1950s and 60s.-Early years:...
's Haus des Lehrers. During the Peaceful Revolution
Peaceful Revolution
The Peaceful Revolution was a series of peaceful political protests against the authoritarian regime of the German Democratic Republic of East Germany. The protests, which included an emigration movement as well as street demonstrations, were a case of nonviolent resistance, also often called...
of 1989, the Alexanderplatz demonstration
Alexanderplatz demonstration
The Alexanderplatz demonstration was a demonstration for political reforms and against the government of the German Democratic Republic on Alexanderplatz in East Berlin on 4 November 1989...
on 4 November was the largest demonstration in the history of East Germany.

Since German reunification
German reunification
German reunification was the process in 1990 in which the German Democratic Republic joined the Federal Republic of Germany , and when Berlin reunited into a single city, as provided by its then Grundgesetz constitution Article 23. The start of this process is commonly referred by Germans as die...
, Alexanderplatz has undergone a gradual process of change with many of the surrounding buildings being renovated. Despite the reconstruction of the tram
Berlin Straßenbahn
The Berlin tram network is the main tram system in Berlin, Germany. It is one of the oldest tram networks in the world having its origins in 1865 and is operated by , which was founded in 1929. It is notable for being one of the largest tram systems; there are 22 tram lines operate across a...
line crossing, it has retained its socialist character, including the much-graffiti
Graffiti
Graffiti is the name for images or lettering scratched, scrawled, painted or marked in any manner on property....
ed "Fountain of Friendship between Peoples" (Brunnen der Völkerfreundschaft), a popular venue.

In 1993 plans for a major redevelopment including the construction of several skyscrapers were published, but due to a lack of demand it is unlikely these will be constructed. However, beginning with the reconstruction of the Kaufhof
Metro AG
Metro AG is a diversified retail and wholesale/cash and carry group based in Düsseldorf, Germany. It has the largest market share in its home market, and is one of the most globalised retail and wholesale corporations. It is the fourth-largest retailer in the world measured by revenues . In English...
department store in 2004, and the biggest underground railway station of Berlin, some buildings will be redesigned and new structures built on the square's south-eastern side. The Alexa shopping mall, with approximately 180 stores opened nearby during 2007 and a large Saturn electronic store was built and is open on Alexanderplatz since 2008.

Many historic buildings are located in the vicinity of Alexanderplatz. The traditional seat of city government, the Rotes Rathaus
Rotes Rathaus
The Red City Hall is the town hall of Berlin, located in the Mitte district on Rathausstraße near Alexanderplatz. It is the home to the governing mayor and the government of the Federal state of Berlin...
, or Red City Hall, is located nearby, as was the former East German parliament building, the Palast der Republik
Palast der Republik
The Palace of the Republic in Berlin was the seat of the parliament of the German Democratic Republic, the People's Chamber, and also served various cultural purposes...
, demolition of which began in February 2006 and has been completed. The reconstruction of the Baroque Stadtschloss at the site has been in planning.