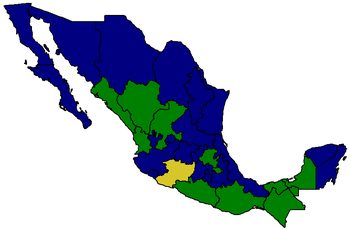 General elections were held in Mexico
Mexico
The United Mexican States , commonly known as Mexico , is a federal constitutional republic in North America. It is bordered on the north by the United States; on the south and west by the Pacific Ocean; on the southeast by Guatemala, Belize, and the Caribbean Sea; and on the east by the Gulf of...
on 6 July 2000. The presidential elections were won by Vicente Fox
Vicente Fox
Vicente Fox Quesada is a Mexican former politician who served as President of Mexico from 1 December 2000 to 30 November 2006 and currently serves as co-President of the Centrist Democrat International, an international organization of Christian democratic political parties.Fox was elected...
of the Alliance for Change, who received 43.4% of the vote, the first time the opposition had won an election since the Mexican Revolution
Mexican Revolution
The Mexican Revolution was a major armed struggle that started in 1910, with an uprising led by Francisco I. Madero against longtime autocrat Porfirio Díaz. The Revolution was characterized by several socialist, liberal, anarchist, populist, and agrarianist movements. Over time the Revolution...
. In the Congressional elections the Alliance for Change emerged as the largest faction in the Chamber of Deputies with 224 of the 500 seats, whilst the Institutional Revolutionary Party
Institutional Revolutionary Party
The Institutional Revolutionary Party is a Mexican political party that held power in the country—under a succession of names—for more than 70 years. The PRI is a member of the Socialist International, as is the rival Party of the Democratic Revolution , making Mexico one of the few...
remained the largest faction in the Senate with 60 of the 128 seats in the Senate. Voter turnout was between 63 and 64% in the elections.

Despite some isolated incidents of irregularities and problems, such as one in the southern state of Campeche which involved the European Union
European Union
The European Union is an economic and political union of 27 independent member states which are located primarily in Europe. The EU traces its origins from the European Coal and Steel Community and the European Economic Community , formed by six countries in 1958...
electoral observer Rocco Buttiglione
Rocco Buttiglione
Rocco Buttiglione is an Italian Christian Democrat politician and an academic.His nomination for a post as European Commissioner with a portfolio that was to include civil liberties, resulted in controversy as some political groups opposed him for his Roman Catholic views on homosexuality, despite...
and which could have created problems for President Ernesto Zedillo
Ernesto Zedillo
Ernesto Zedillo Ponce de León is a Mexican economist and politician. He served as President of Mexico from December 1, 1994 to November 30, 2000, as the last of the uninterrupted seventy year line of Mexican presidents from the Institutional Revolutionary Party...
had the PRI candidate won, there was little evidence that those incidents were centrally coordinated (as opposed to led by local PRI officials) and critics concluded that the irregularities that occurred did not alter the outcome of the presidential vote, which was more definitive than expected. Civic organizations fielded more than 80,000 trained electoral observers, foreign observers were invited to witness the process, and numerous "quick count" operations and exit polls (not all of them independent) validated the official vote tabulation. The largest exit poll was organized by the U.S. firm Penn, Schoen & Berland
Penn, Schoen & Berland
Penn, Schoen Berland is a market research, political polling and strategic consulting firm with American offices in New York, Washington, Denver, Seattle, Los Angeles, Austin, and San Francisco, and international offices in London, Hong Kong, Beijing, Dubai, and Delhi. The firm was founded in 1975...
, financed by a hitherto obscure outfit in Dallas called Democracy Watch (later it emerged that Democracy Watch was essentially set up by Fox campaign insiders to help prevent an expected election fraud).

Numerous electoral reforms implemented since 1989 aided in the opening of the Mexican political system, and since then opposition parties made historic gains in elections at all levels. The chief electoral concerns shifted from outright fraud to campaign fairness issues and, between 1995 and 1996, the political parties negotiated constitutional amendments to address these issues. The legislation implemented included major points of consensus that had been worked out with the opposition parties. Under the new laws, public financing predominated over private contributions to political parties, procedures for auditing parties were tightened, and the authority and independence of the electoral institutions were strengthened. The court system was also given greatly expanded authority to hear civil rights cases on electoral matters brought by individuals or groups. In short, the extensive reform efforts of the 1990s "leveled the playing field" for the parties.