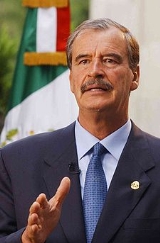 Fox was elected President of Mexico in the 2000 presidential election
Mexican general election, 2000
General elections were held in Mexico on 6 July 2000. The presidential elections were won by Vicente Fox of the Alliance for Change, who received 43.4% of the vote, the first time the opposition had won an election since the Mexican Revolution...
, a historically significant election that made him the first president elected from an opposition party since Francisco I. Madero
Francisco I. Madero
Francisco Ignacio Madero González was a politician, writer and revolutionary who served as President of Mexico from 1911 to 1913. As a respectable upper-class politician, he supplied a center around which opposition to the dictatorship of Porfirio Díaz could coalesce...
in 1910 and the first one in 71 years to defeat, with 42 percent of the vote, the then-dominant Institutional Revolutionary Party
Institutional Revolutionary Party
The Institutional Revolutionary Party is a Mexican political party that held power in the country—under a succession of names—for more than 70 years. The PRI is a member of the Socialist International, as is the rival Party of the Democratic Revolution , making Mexico one of the few...
(PRI).

After serving as president of Mexico for six years, President Fox returned to his home state of Guanajuato
Guanajuato
Guanajuato officially Estado Libre y Soberano de Guanajuato is one of the 31 states which, with the Federal District, comprise the 32 Federal Entities of Mexico. It is divided in 46 municipalities and its capital city is Guanajuato....
, where he resides with his wife and family.

Change will not come from above, it will come from below, from the small and medium size businesspeople..

I am the guardian of power, not its owner.

Mexico doesn't deserve what has happened to us. A democratic change is urgent, a change that will permit us to stop being a loser country.

While campaigning for President

There's no doubt that Mexican men and women full of dignity, willpower and a capacity for work are doing the work that not even blacks want to do in the United States.

In a meeting with Texas businessmen, in what he claims was a misunderstood defense of Mexican illegal workers in the US.

We are a nation in which freedom is alive in the squares and streets, in the daily work of the communications media, in the open relationship between the governing and the governed.

To be united, to be friendly, pays and pays well

I have the boots well placed in the ground, and I see reality up front, never giving it my back

Translation: You eat, and then you leave.

Said two days before the elections, about the challenges for his successor.

We Mexicans believe in the force of the law, not in the law of force

Said during his Sixth State of the Union, while the opposition used force to block congress and prevent him from speaking at the palace.
More
x