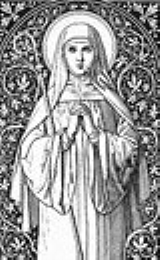 Encyclopedia
Saint Mathilda (c. 895 – 14 March 968) was the wife of King Henry I of Germany, the first ruler of the Saxon Ottonian (or Liudolfing) dynasty, thereby Duchess consort of Saxony from 912 and German Queen from 919 until 936. Their eldest son Otto
Otto I, Holy Roman Emperor
Otto I the Great , son of Henry I the Fowler and Matilda of Ringelheim, was Duke of Saxony, King of Germany, King of Italy, and "the first of the Germans to be called the emperor of Italy" according to Arnulf of Milan...
succeeded his father as German King and was crowned Holy Roman Emperor
Holy Roman Emperor
The Holy Roman Emperor is a term used by historians to denote a medieval ruler who, as German King, had also received the title of "Emperor of the Romans" from the Pope...
in 962. Matilda's surname refers to Ringelheim
Salzgitter-Ringelheim
Ringelheim is the sixth biggest suburb of Salzgitter in Lower Saxony, Germany. Located at the very far south-western end of the city, the most important station of the city is here, because the railway lines Hannover - Hildesheim - Salzgitter-Ringelheim - Goslar - Halle and Braunschweig -...
, where her comital Immedinger
Immedinger
The Immedinger were a noble family of medieval Saxony, descended from the Saxon leader Widukind. The most notable member was Saint Matilda , queen consort of King Henry I of Germany....
relatives established a convent about 940.

St. Mathilda was the daughter of the Westphalia
Westphalia
Westphalia is a region in Germany, centred on the cities of Arnsberg, Bielefeld, Dortmund, Minden and Münster.Westphalia is roughly the region between the rivers Rhine and Weser, located north and south of the Ruhr River. No exact definition of borders can be given, because the name "Westphalia"...
n count Dietrich and his wife Reinhild, and her biographers traced her ancestry back to the legendary Saxon
Old Saxony
Old Saxony is the original homeland of the Saxons in the northwest corner of modern Germany and roughly corresponds today with the contemporary Lower Saxony, Westphalia and western Saxony-Anhalt....
leader Widukind
Widukind
Widukind was a pagan Saxon leader and the chief opponent of Charlemagne during the Saxon Wars. Widukind was the leader of the Saxons against the Frankish king Charlemagne...
(c. 730 – 807). One of her sisters married Count Wichmann the Elder
Wichmann the Elder
Wichmann I the Elder was a member of the Saxon House of Billung. He was a brother of Amelung, Bishop of Verden, and Herman, Duke of Saxony....
, a member of the House of Billung.

As a young girl, she was sent to the convent of Herford
Herford Abbey
Herford Abbey was the oldest women's religious house in the Duchy of Saxony. It was founded as a house of secular canonesses in 789, initially in Müdehorst by a nobleman called Waltger, who moved it in about 800 onto the lands of his estate Herivurth which stood at the crossing of a number of...
, where her grandmother Matilda was abbess and where her reputation for beauty and virtue (probably also her Westphalian dowry) is said to have attracted the attention of Duke Otto I of Saxony
Otto I, Duke of Saxony
Otto , called the Illustrious by later authors, was the Duke of Saxony from 880 to his death. He was the younger son of Duke Liudolf of Saxony and his wife Oda of Billung, and succeeded his brother Bruno as duke after the latter's death in battle in 880...
, who betrothed her to his recently divorced son and heir, Henry the Fowler. They were married at Wallhausen
Wallhausen, Saxony-Anhalt
Wallhausen is a municipality in the Mansfeld-Südharz district of Saxony-Anhalt, Germany. It is located on the Helme river north of the Kyffhäuser mountain range and the border with Thuringia...
in 909. As the eldest surviving son, Henry succeeded his father as Saxon duke in 912 and upon the death of King Conrad I of Germany
Conrad I of Germany
Conrad I , called the Younger, was Duke of Franconia from 906 and King of Germany from 911 to 918, the only king of the Conradine dynasty...
was elected King of Germany (East Francia) in 919. He and Matilda had three sons and two daughters:

After her husband had died in 936, Matilda and her son Otto established Quedlinburg Abbey
Quedlinburg Abbey
Quedlinburg Abbey was a house of secular canonesses in Quedlinburg, Saxony-Anhalt, Germany. It was founded in 936 on the initiative of Saint Mathilda, the widow of Henry the Fowler, as his memorial...
in his memory, a convent of noble canonesses, where in 966 her granddaughter Matilda
Matilda, Abbess of Quedlinburg
Matilda , also known as Mathilda and Mathilde, was the first Princess-Abbess of Quedlinburg. She was the daughter of Otto I, Holy Roman Emperor, and his second wife, Adelaide of Italy.- Taking the veil :...
became the first abbess. At first she remained at the court of her son Otto, however in the quarrels between the young king and his rivaling brother Henry
Henry I, Duke of Bavaria
Henry I was Duke of Bavaria.He was the second son of the German King Henry the Fowler and his wife Matilda. He attempted a revolt against his older brother Otto I in 938 in alliance with Eberhard of Franconia and Giselbert of Lorraine, believing he had a claim on the throne. In 939 he was defeated...
a cabal of royal advisors is reported to have accused her of weakening the royal treasury in order to pay for her charitable activities. After a brief exile at her Westphalian manors at Enger
Enger
Enger is a town in the Herford district, in North Rhine-Westphalia, Germany.-Geography:Enger is situated between the Teutoburg Forest and the Wiehen Hills, approx...
, where she established a college of canons
Canon (priest)
A canon is a priest or minister who is a member of certain bodies of the Christian clergy subject to an ecclesiastical rule ....
in 947, Matilda was brought back to court at the urging of King Otto's first wife, the Anglo-Saxon princess Edith of Wessex
Eadgyth
Edith of England , also spelt Eadgyth or Ædgyth, was the daughter of Edward the Elder, and the wife of Otto I, Holy Roman Emperor.-Life:...
.

Matilda died at Quedlinburg, she outlived her husband by 32 years. Her and Henry's mortal remains are buried at the crypt
Crypt
In architecture, a crypt is a stone chamber or vault beneath the floor of a burial vault possibly containing sarcophagi, coffins or relics....
of the St. Servatius' abbey church.

Saint Matilda was celebrated for her devotion to prayer and almsgiving; her first biographer depicted her (in a passage indebted to the sixth-century vita of the Frankish queen Radegund
Radegund
Radegund was a 6th century Frankish princess, who founded the monastery of the Holy Cross at Poitiers. Canonized in the 9th century, she is the patron saint of several English churches and of Jesus College, Cambridge.-Life history:Radegund was born about 520 to Bertachar, one of the three kings...
by Venantius Fortunatus
Venantius Fortunatus
Venantius Honorius Clementianus Fortunatus was a Latin poet and hymnodist in the Merovingian Court, and a Bishop of the early Catholic Church. He was never canonised but was venerated as Saint Venantius Fortunatus during the Middle Ages.-Life:Venantius Fortunatus was born between 530 and 540 A.D....
) leaving her husband's side in the middle of the night and sneaking off to church to pray. St. Mathilda founded many religious
Religion
Religion is a collection of cultural systems, belief systems, and worldviews that establishes symbols that relate humanity to spirituality and, sometimes, to moral values. Many religions have narratives, symbols, traditions and sacred histories that are intended to give meaning to life or to...
institutions, including the canonry of Quedlinburg, which became a center of ecclesiastical and secular life in Germany under the rule of the Ottonian dynasty, as well as the convents of St. Wigbert in Quedlinburg, in Pöhlde
Pöhlde
Pöhlde is a village in southern Lower Saxony in Germany. It is part of the town Herzberg am Harz. It has a population of 2207 . Archaeological excavation has revealed traces of settlement dating to the 2nd through 4th centuries AD. The town is noted for its Benedictine abbey...
, Enger and Nordhausen
Nordhausen
Nordhausen is a town at the southern edge of the Harz Mountains, in the state of Thuringia, Germany. It is the capital of the district of Nordhausen...
in Thuringia
Thuringia
The Free State of Thuringia is a state of Germany, located in the central part of the country.It has an area of and 2.29 million inhabitants, making it the sixth smallest by area and the fifth smallest by population of Germany's sixteen states....
, likely the source of at least one of her vitae
Vitae
Vitae is a Latin word, meaning or pertaining to life.* The Academia Vitae is a liberal arts college in Deventer, The Netherlands.* Aqua vitae is an archaic name for a concentrated aqueous solution of ethanol....
.

She was later canonized, with her cult largely confined to Saxony
Saxony
The Free State of Saxony is a landlocked state of Germany, contingent with Brandenburg, Saxony Anhalt, Thuringia, Bavaria, the Czech Republic and Poland. It is the tenth-largest German state in area, with of Germany's sixteen states....
and Bavaria
Bavaria
Bavaria, formally the Free State of Bavaria is a state of Germany, located in the southeast of Germany. With an area of , it is the largest state by area, forming almost 20% of the total land area of Germany...
. St. Mathilda's feast day according to the German calendar of saints is on March 14.