Encyclopedia
Quedlinburg Abbey was a house of secular canonesses in Quedlinburg
Quedlinburg
Quedlinburg is a town located north of the Harz mountains, in the district of Harz in the west of Saxony-Anhalt, Germany. In 1994 the medieval court and the old town was set on the UNESCO world heritage list....
, Saxony-Anhalt
Saxony-Anhalt
Saxony-Anhalt is a landlocked state of Germany. Its capital is Magdeburg and it is surrounded by the German states of Lower Saxony, Brandenburg, Saxony, and Thuringia.Saxony-Anhalt covers an area of...
, Germany
Germany
Germany , officially the Federal Republic of Germany , is a federal parliamentary republic in Europe. The country consists of 16 states while the capital and largest city is Berlin. Germany covers an area of 357,021 km2 and has a largely temperate seasonal climate...
. It was founded in 936 on the initiative of Saint Mathilda, the widow of Henry the Fowler, as his memorial . For many centuries it enjoyed great prestige and influence. 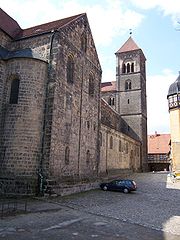 Quedlinburg Abbey was founded on the castle hill of Quedlinburg in the present Saxony-Anhalt in 936 by Otto I, Holy Roman Emperor
Otto I, Holy Roman Emperor
Otto I the Great , son of Henry I the Fowler and Matilda of Ringelheim, was Duke of Saxony, King of Germany, King of Italy, and "the first of the Germans to be called the emperor of Italy" according to Arnulf of Milan...
, at the request of his mother Queen Matilda
Matilda of Ringelheim
Saint Mathilda was the wife of King Henry I of Germany, the first ruler of the Saxon Ottonian dynasty, thereby Duchess consort of Saxony from 912 and German Queen from 919 until 936. Their eldest son Otto succeeded his father as German King and was crowned Holy Roman Emperor in 962...
, later canonised as Saint Matilda, in honour of her late husband, Otto's father, King Henry the Fowler
Henry I of Germany
Henry I the Fowler was the Duke of Saxony from 912 and German king from 919 until his death. First of the Ottonian Dynasty of German kings and emperors, he is generally considered to be the founder and first king of the medieval German state, known until then as East Francia...
, and as his memorial . Henry was buried here, as was Matilda herself.

The "Kaiserlich freie weltliche Reichsstift Quedlinburg" ("Free secular Imperial abbey of Quedlinburg"), as its full style was until its dissolution in 1802, consisted of a proprietary church
Proprietary church
During the Middle Ages, the proprietary church was a church, abbey or cloister built on private ground by a feudal lord, over which he retained proprietary interests, especially the right of what in English law is "advowson", that of nominating the ecclesiastic personnel...
of the Imperial family to which was attached a college of secular canonesses (Stiftsdamen), a community of the unmarried daughters of the greater nobility and royalty leading a godly life. The greatest and most prominent foundations of this sort were Essen Abbey
Essen Abbey
Essen Abbey was a collegiate foundation for women of the high nobility in Essen. It was founded in about 845 by the Saxon Altfrid , later Bishop of Hildesheim and saint, near a royal estate called Astnidhi, which later gave its name to the religious house and to the town...
, Gandersheim Abbey
Gandersheim Abbey
Gandersheim Abbey is a former house of secular canonesses in the present town of Bad Gandersheim in Lower Saxony, Germany. It was founded in 852 by Duke Liudolf of Saxony, progenitor of the Liudolfing or Ottonian dynasty, whose rich endowments ensured its stability and prosperity.The "Imperial...
, Gernrode Abbey, Cologne Abbey and Herford Abbey
Herford Abbey
Herford Abbey was the oldest women's religious house in the Duchy of Saxony. It was founded as a house of secular canonesses in 789, initially in Müdehorst by a nobleman called Waltger, who moved it in about 800 onto the lands of his estate Herivurth which stood at the crossing of a number of...
, in the last of which the young Queen Matilda had been brought up by her grandmother, the abbess.

Thanks to its Imperial connections the new foundation attracted rich endowments and was soon a wealthy and thriving community. Ecclesiastically, the abbess was exempt from the jurisdiction of her diocesan, the Bishop of Halberstadt, and subject to no superior except the Pope. The bishops of Halberstadt were constantly engaged in dispute with the abbesses, as they claimed to have spiritual jurisdiction over the abbey in virtue of subjection of women to men. In her political relations, the abbess was a princess of the Holy Roman Empire, entitled to seat in the College of Princes and a vote at the Diets.

During the Reformation
Protestant Reformation
The Protestant Reformation was a 16th-century split within Western Christianity initiated by Martin Luther, John Calvin and other early Protestants. The efforts of the self-described "reformers", who objected to the doctrines, rituals and ecclesiastical structure of the Roman Catholic Church, led...
the abbey became Protestant, under Abbess Anna II (Countess of Stolberg)
Anna II, Abbess of Quedlinburg
Countess Anna of Stolberg-Wernigerode was a German noblewoman who reigned as Princess-Abbess of Quedlinburg from 1516 until her death...
.

The church of St. Servatius is dedicated to Saint Servatius
Saint Servatius
Saint Servatius was bishop of Tongeren—Roman Atuatuca Tungrorum the capital of the Tungri—one of the earliest dioceses in the Low Countries. Later in his life he fled to Maastricht, Roman Mosae Trajectum, where he became the first bishop of this city...
of Tongeren and Saint Denis and is a significant Romanesque
Romanesque architecture
Romanesque architecture is an architectural style of Medieval Europe characterised by semi-circular arches. There is no consensus for the beginning date of the Romanesque architecture, with proposals ranging from the 6th to the 10th century. It developed in the 12th century into the Gothic style,...
building. Construction of the three-naved basilica
Basilica
The Latin word basilica , was originally used to describe a Roman public building, usually located in the forum of a Roman town. Public basilicas began to appear in Hellenistic cities in the 2nd century BC.The term was also applied to buildings used for religious purposes...
on the remains of three predecessor buildings began sometime before 997 and finished in 1021. A fire in 1070 caused severe damage. The building was rebuilt in its previous form, and was rededicated in 1129 in the presence of Lothar III. The church contains the architectural feature known as the niedersächsischer Stützenwechsel.

In the first decades after the foundation the community was favoured by numerous gifts of land, particularly from the Imperial family. All later clearances (i.e., of previously uncultivated land) in the immediate vicinity were also theirs, but in addition they acquired far more distant possessions, such as Soltau
Soltau
- Middle Ages :The region of the Lüneburg Heath had already been settled by the start of the New Stone Age about 4,000 years ago. The Soltau area was initially occupied by a few individual farms. The parish of Soltau was probably founded around 830 and the first wooden church Sante Johannis...
, 170 kilometres away, given by Otto I in 936.

Among other property the abbey also received the following:

The abbey also received numerous gifts of precious books, manuscripts and liturgical items, which were stored in the treasury. At the end of World War II
World War II
World War II, or the Second World War , was a global conflict lasting from 1939 to 1945, involving most of the world's nations—including all of the great powers—eventually forming two opposing military alliances: the Allies and the Axis...
a number of the most valuable items were looted by an American
United States
The United States of America is a federal constitutional republic comprising fifty states and a federal district...
soldier, Joe Tom Meador (born 30 June 1916, died 1 February 1980), including the reliquary
Reliquary
A reliquary is a container for relics. These may be the physical remains of saints, such as bones, pieces of clothing, or some object associated with saints or other religious figures...
of Saint Servatius, from the time of Charles the Bald
Charles the Bald
Charles the Bald , Holy Roman Emperor and King of West Francia , was the youngest son of the Emperor Louis the Pious by his second wife Judith.-Struggle against his brothers:He was born on 13 June 823 in Frankfurt, when his elder...
; the 9th century Samuhel Evangeliary (Samuhel Evangeliar); the printed St. Wipert's Evangeliary (Evangelistar aus St Wiperti) of 1513; and a liturgical ivory comb. The stolen items reappeared in 1987 and after much litigation were returned to the abbey in 1993.

The abbey is also known as the home of the "Annals of Quedlinburg" (Latin
Latin
Latin is an Italic language originally spoken in Latium and Ancient Rome. It, along with most European languages, is a descendant of the ancient Proto-Indo-European language. Although it is considered a dead language, a number of scholars and members of the Christian clergy speak it fluently, and...
: Saxonicae Annales Quedlinburgenses), begun in 1008 and finished in 1030 in the abbey, quite possibly by a female writer. Quedlinburg was well suited for gathering information on current political affairs, given its connections to the Imperial family and the proximity of Magdeburg
Magdeburg
Magdeburg , is the largest city and the capital city of the Bundesland of Saxony-Anhalt, Germany. Magdeburg is situated on the Elbe River and was one of the most important medieval cities of Europe....
, an Imperial centre. The "Annals" are mostly concerned with the history of the Holy Roman Empire
Holy Roman Empire
The Holy Roman Empire was a realm that existed from 962 to 1806 in Central Europe.It was ruled by the Holy Roman Emperor. Its character changed during the Middle Ages and the Early Modern period, when the power of the emperor gradually weakened in favour of the princes...
.