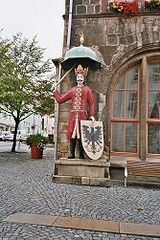 Encyclopedia
Nordhausen is a town
Town
A town is a human settlement larger than a village but smaller than a city. The size a settlement must be in order to be called a "town" varies considerably in different parts of the world, so that, for example, many American "small towns" seem to British people to be no more than villages, while...
at the southern edge of the Harz Mountains
Harz
The Harz is the highest mountain range in northern Germany and its rugged terrain extends across parts of Lower Saxony, Saxony-Anhalt and Thuringia. The name Harz derives from the Middle High German word Hardt or Hart , latinized as Hercynia. The legendary Brocken is the highest summit in the Harz...
, in the state of Thuringia
Thuringia
The Free State of Thuringia is a state of Germany, located in the central part of the country.It has an area of and 2.29 million inhabitants, making it the sixth smallest by area and the fifth smallest by population of Germany's sixteen states....
, Germany
Germany
Germany , officially the Federal Republic of Germany , is a federal parliamentary republic in Europe. The country consists of 16 states while the capital and largest city is Berlin. Germany covers an area of 357,021 km2 and has a largely temperate seasonal climate...
. It is the capital of the district of Nordhausen
Nordhausen (district)
Nordhausen is a Kreis in the north of Thuringia, Germany. Neighboring districts are Harz and Mansfeld-Südharz in Saxony-Anhalt, the district Kyffhäuserkreis, Eichsfeld in Thuringia and the districts Osterode and Goslar in Lower Saxony.-History:The district was created in 1815, when the Prussian...
. It was once known for its tobacco industry, and is still known for its distilled spirit, .

The town is first mentioned in a 13 May 927 document of King Henry the Fowler, but an earlier settlement on the site dates back to around 785. In 1220, Emperor Frederick II
Frederick II, Holy Roman Emperor
Frederick II , was one of the most powerful Holy Roman Emperors of the Middle Ages and head of the House of Hohenstaufen. His political and cultural ambitions, based in Sicily and stretching through Italy to Germany, and even to Jerusalem, were enormous...
made it an Imperial Free City, and in 1430 Nordhausen joined the Hanseatic League
Hanseatic League
The Hanseatic League was an economic alliance of trading cities and their merchant guilds that dominated trade along the coast of Northern Europe...
. In 1500 it became part of the Lower Saxon Circle
Lower Saxon Circle
The Lower Saxon Circle was an Imperial Circle of the Holy Roman Empire. Covering much of the territory of the mediæval Duchy of Saxony , firstly the circle used to be called the Saxon Circle , only to be later better differentiated from the Upper Saxon Circle the more specific name prevailed.An...
, and from around the same year the city began producing fermented grain liquor, which became famous under the name Nordhäuser Doppelkorn. In 1523, a year in which Thomas Müntzer spent some time in the city, the Protestant Reformation
Protestant Reformation
The Protestant Reformation was a 16th-century split within Western Christianity initiated by Martin Luther, John Calvin and other early Protestants. The efforts of the self-described "reformers", who objected to the doctrines, rituals and ecclesiastical structure of the Roman Catholic Church, led...
came to Nordhausen. 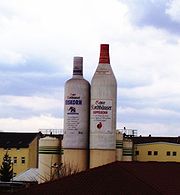 After the Peace of Westphalia
Peace of Westphalia
The Peace of Westphalia was a series of peace treaties signed between May and October of 1648 in Osnabrück and Münster. These treaties ended the Thirty Years' War in the Holy Roman Empire, and the Eighty Years' War between Spain and the Dutch Republic, with Spain formally recognizing the...
in 1648, much of Nordhausen's surroundings became part of Brandenburg-Prussia
Brandenburg-Prussia
Brandenburg-Prussia is the historiographic denomination for the Early Modern realm of the Brandenburgian Hohenzollerns between 1618 and 1701. Based in the Electorate of Brandenburg, the main branch of the Hohenzollern intermarried with the branch ruling the Duchy of Prussia, and secured succession...
, although the city itself remained independent. During the Napoleonic Wars
Napoleonic Wars
The Napoleonic Wars were a series of wars declared against Napoleon's French Empire by opposing coalitions that ran from 1803 to 1815. As a continuation of the wars sparked by the French Revolution of 1789, they revolutionised European armies and played out on an unprecedented scale, mainly due to...
, Prussian troops
Prussian Army
The Royal Prussian Army was the army of the Kingdom of Prussia. It was vital to the development of Brandenburg-Prussia as a European power.The Prussian Army had its roots in the meager mercenary forces of Brandenburg during the Thirty Years' War...
occupied Nordhausen on 2 August 1802; the city lost its status as an Imperial Free City during the German Mediatisation
German Mediatisation
The German Mediatisation was the series of mediatisations and secularisations that occurred in Germany between 1795 and 1814, during the latter part of the era of the French Revolution and then the Napoleonic Era....
. It became part of the Kingdom of Westphalia
Kingdom of Westphalia
The Kingdom of Westphalia was a new country of 2.6 million Germans that existed from 1807-1813. It included of territory in Hesse and other parts of present-day Germany. While formally independent, it was a vassal state of the First French Empire, ruled by Napoleon's brother Jérôme Bonaparte...
created in 1807. Following the defeat of Napoleon Bonaparte
Napoleon I of France
Napoleon Bonaparte was a French military and political leader during the latter stages of the French Revolution.As Napoleon I, he was Emperor of the French from 1804 to 1815...
, Nordhausen was included in the Kingdom of Prussia
Kingdom of Prussia
The Kingdom of Prussia was a German kingdom from 1701 to 1918. Until the defeat of Germany in World War I, it comprised almost two-thirds of the area of the German Empire...
's Province of Saxony
Province of Saxony
The Province of Saxony was a province of the Kingdom of Prussia and later the Free State of Prussia from 1816 until 1945. Its capital was Magdeburg.-History:The province was created in 1816 out of the following territories:...
created in 1816. Nordhausen was an urban district
Urban districts of Germany
This is a list of urban districts in Germany. Germany's sixteen states are further subdivided into 402 districts of which 107 are urban districts – cities which constitute a district in their own right. A similar concept is the Statutarstadt in Austria...
from 1882-1950.

In 1866 Nordhausen became connected by railway to Halle
Halle, Saxony-Anhalt
Halle is the largest city in the German state of Saxony-Anhalt. It is also called Halle an der Saale in order to distinguish it from the town of Halle in North Rhine-Westphalia...
.

Nordhausen has recently made international news due to a major labor dispute. Since 10 July 2007, 135 employees of the Biria bicycle factory (a subsidiary Bike Systems GmbH) have been occupying the factory and have resumed production, selling the cycles directly to consumers and retailers.

Nordhausen has a (University of Applied Sciences) that offers Bachelor's
Bachelor's degree
A bachelor's degree is usually an academic degree awarded for an undergraduate course or major that generally lasts for three or four years, but can range anywhere from two to six years depending on the region of the world...
and Master's degree
Master's degree
A master's is an academic degree granted to individuals who have undergone study demonstrating a mastery or high-order overview of a specific field of study or area of professional practice...
s in business administration, public management
Public management
Public management is a term that considers that government and non-profit administration resembles private-sector management in some important ways. As such, there are management tools appropriate in public and in private domains, tools that maximize efficiency and effectiveness...
, and business engineering
Business engineering
Business Engineering is an interdisciplinary field of engineering that focuses on how complex businesses should be designed and managed.- Overview :...
, among others.

The town is twinned
Town twinning
Twin towns and sister cities are two of many terms used to describe the cooperative agreements between towns, cities, and even counties in geographically and politically distinct areas to promote cultural and commercial ties.- Terminology :...
with Beit Shemesh, Israel
Israel
The State of Israel is a parliamentary republic located in the Middle East, along the eastern shore of the Mediterranean Sea...
Charleville-Mézières
Charleville-Mézières
Charleville-Mézières is a commune in northern France, capital of the Ardennes department in the Champagne-Ardenne region. Charleville-Mézières is located on the banks of the Meuse River.-History:...
, France
France
The French Republic , The French Republic , The French Republic , (commonly known as France , is a unitary semi-presidential republic in Western Europe with several overseas territories and islands located on other continents and in the Indian, Pacific, and Atlantic oceans. Metropolitan France...
Bochum
Bochum
Bochum is a city in North Rhine-Westphalia, western Germany. It is located in the Ruhr area and is surrounded by the cities of Essen, Gelsenkirchen, Herne, Castrop-Rauxel, Dortmund, Witten and Hattingen.-History:...
, Germany
Germany
Germany , officially the Federal Republic of Germany , is a federal parliamentary republic in Europe. The country consists of 16 states while the capital and largest city is Berlin. Germany covers an area of 357,021 km2 and has a largely temperate seasonal climate...
Ostrów Wielkopolski
Ostrów Wielkopolski
Ostrów Wielkopolski is a town in central Poland with 72,360 inhabitants , situated in the Greater Poland Voivodeship; the seat of Ostrów Wielkopolski County.-History:Recently, a small fortified dwelling dating from the 10th century was discovered on the north-east side of...
, Poland
Poland
Poland , officially the Republic of Poland , is a country in Central Europe bordered by Germany to the west; the Czech Republic and Slovakia to the south; Ukraine, Belarus and Lithuania to the east; and the Baltic Sea and Kaliningrad Oblast, a Russian exclave, to the north...