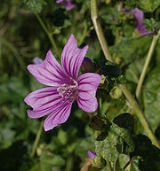 Encyclopedia
Malva is a genus
Genus
In biology, a genus is a low-level taxonomic rank used in the biological classification of living and fossil organisms, which is an example of definition by genus and differentia...
of about 25–30 species of herbaceous
Herbaceous
A herbaceous plant is a plant that has leaves and stems that die down at the end of the growing season to the soil level. They have no persistent woody stem above ground...
annual
Annual plant
An annual plant is a plant that usually germinates, flowers, and dies in a year or season. True annuals will only live longer than a year if they are prevented from setting seed...
, biennial
Biennial plant
A biennial plant is a flowering plant that takes two years to complete its biological lifecycle. In the first year the plant grows leaves, stems, and roots , then it enters a period of dormancy over the colder months. Usually the stem remains very short and the leaves are low to the ground, forming...
, and perennial plant
Perennial plant
A perennial plant or simply perennial is a plant that lives for more than two years. The term is often used to differentiate a plant from shorter lived annuals and biennials. The term is sometimes misused by commercial gardeners or horticulturalists to describe only herbaceous perennials...
s in the family Malvaceae
Malvaceae
Malvaceae, or the mallow family, is a family of flowering plants containing over 200 genera with close to 2,300 species. Judd & al. Well known members of this family include okra, jute and cacao...
(of which it is the type genus), one of several closely related genera in the family to bear the common English name mallow. The genus is widespread throughout the temperate
Temperate
In geography, temperate or tepid latitudes of the globe lie between the tropics and the polar circles. The changes in these regions between summer and winter are generally relatively moderate, rather than extreme hot or cold...
, subtropical
Subtropics
The subtropics are the geographical and climatical zone of the Earth immediately north and south of the tropical zone, which is bounded by the Tropic of Cancer and the Tropic of Capricorn, at latitudes 23.5°N and 23.5°S...
and tropical
Tropics
The tropics is a region of the Earth surrounding the Equator. It is limited in latitude by the Tropic of Cancer in the northern hemisphere at approximately  N and the Tropic of Capricorn in the southern hemisphere at  S; these latitudes correspond to the axial tilt of the Earth...
regions of Africa
Africa
Africa is the world's second largest and second most populous continent, after Asia. At about 30.2 million km² including adjacent islands, it covers 6% of the Earth's total surface area and 20.4% of the total land area...
, Asia
Asia
Asia is the world's largest and most populous continent, located primarily in the eastern and northern hemispheres. It covers 8.7% of the Earth's total surface area and with approximately 3.879 billion people, it hosts 60% of the world's current human population...
and Europe
Europe
Europe is, by convention, one of the world's seven continents. Comprising the westernmost peninsula of Eurasia, Europe is generally 'divided' from Asia to its east by the watershed divides of the Ural and Caucasus Mountains, the Ural River, the Caspian and Black Seas, and the waterways connecting...
. The word "mallow" is derived from Old English "malwe", which was imported from Latin
Latin
Latin is an Italic language originally spoken in Latium and Ancient Rome. It, along with most European languages, is a descendant of the ancient Proto-Indo-European language. Although it is considered a dead language, a number of scholars and members of the Christian clergy speak it fluently, and...
"malva", which originated in Ancient Greek
Ancient Greek
Ancient Greek is the stage of the Greek language in the periods spanning the times c. 9th–6th centuries BC, , c. 5th–4th centuries BC , and the c. 3rd century BC – 6th century AD of ancient Greece and the ancient world; being predated in the 2nd millennium BC by Mycenaean Greek...
μαλάχη (malakhē) meaning "yellow" or Hebrew
Hebrew language
Hebrew is a Semitic language of the Afroasiatic language family. Culturally, is it considered by Jews and other religious groups as the language of the Jewish people, though other Jewish languages had originated among diaspora Jews, and the Hebrew language is also used by non-Jewish groups, such...
מַלּוּחַ (malúakh) meaning "salty". A number of species, previously considered to belong to Lavatera
Lavatera
Lavatera is a genus of about 25 species of flowering plants in the family Malvaceae, native to the Mediterranean region, central and eastern Asia, and Australia. A number of species previously listed in this genus have now been transferred to the related genus Malva...
, have been moved to Malva.

The leaves
Leaf
A leaf is an organ of a vascular plant, as defined in botanical terms, and in particular in plant morphology. Foliage is a mass noun that refers to leaves as a feature of plants....
are alternate, palmately lobed. The flower
Flower
A flower, sometimes known as a bloom or blossom, is the reproductive structure found in flowering plants . The biological function of a flower is to effect reproduction, usually by providing a mechanism for the union of sperm with eggs...
s are from 0.5–5 cm diameter, with five pink or white petals.

The colour mauve
Mauve
Mauve is a pale lavender-lilac color, one of many in the range of purples. The color mauve is named after the mallow flower....
was in 1859 named after the French
French language
French is a Romance language spoken as a first language in France, the Romandy region in Switzerland, Wallonia and Brussels in Belgium, Monaco, the regions of Quebec and Acadia in Canada, and by various communities elsewhere. Second-language speakers of French are distributed throughout many parts...
name for this plant.

Several species are widely grown as garden
Garden
A garden is a planned space, usually outdoors, set aside for the display, cultivation, and enjoyment of plants and other forms of nature. The garden can incorporate both natural and man-made materials. The most common form today is known as a residential garden, but the term garden has...
flowers, while some are invasive weeds
Invasive species
"Invasive species", or invasive exotics, is a nomenclature term and categorization phrase used for flora and fauna, and for specific restoration-preservation processes in native habitats, with several definitions....
, particularly in the Americas
Americas
The Americas, or America , are lands in the Western hemisphere, also known as the New World. In English, the plural form the Americas is often used to refer to the landmasses of North America and South America with their associated islands and regions, while the singular form America is primarily...
where they are not native.

Many species are edible as leaf vegetable
Leaf vegetable
Leaf vegetables, also called potherbs, green vegetables, greens, leafy greens or salad greens, are plant leaves eaten as a vegetable, sometimes accompanied by tender petioles and shoots...
s. Known as ebegümeci in Turkish
Turkish language
Turkish is a language spoken as a native language by over 83 million people worldwide, making it the most commonly spoken of the Turkic languages. Its speakers are located predominantly in Turkey and Northern Cyprus with smaller groups in Iraq, Greece, Bulgaria, the Republic of Macedonia, Kosovo,...
, it is used as vegetable in Turkey
Turkey
Turkey , known officially as the Republic of Turkey , is a Eurasian country located in Western Asia and in East Thrace in Southeastern Europe...
in various forms such as stuffing the leaves with bulgur or rice or using the boiled leaves as side dish. Malva verticillata is grown on a limited commercial scale in China
China
Chinese civilization may refer to:* China for more general discussion of the country.* Chinese culture* Greater China, the transnational community of ethnic Chinese.* History of China* Sinosphere, the area historically affected by Chinese culture...
; when made as a herbal infusion, it is used for its colon cleansing properties and as a weight loss supplement.

Very easily grown, short-lived perennials often grown as ornamental plant
Ornamental plant
Ornamental plants are plants that are grown for decorative purposes in gardens and landscape design projects, as house plants, for cut flowers and specimen display...
s. Mild tasting young mallow leaves can be a substitute for lettuce
Lettuce
Lettuce is a temperate annual or biennial plant of the daisy family Asteraceae. It is most often grown as a leaf vegetable. It is eaten either raw, notably in salads, sandwiches, hamburgers, tacos, and many other dishes, or cooked, as in Chinese cuisine in which the stem becomes just as important...
, whereas older leaves are better cooked as a leafy green vegetable. The buds and flowers can be used in salads.

Cultivation is by sowing the seeds directly outdoors in early spring. The seed is easy to collect, and they will often spread themselves by seed.

In Catalonia (Southern Europe) they use the leaves to cure stinging nettles sting.

Bodo tribals in Bodoland, Assam (Northeast India) cultivate a sub-species of malva and use it extensively in their traditional cuisine, although its use is not much known among other people of India.

This plant is one of the earliest cited in recorded literature. Horace
Horace
Quintus Horatius Flaccus , known in the English-speaking world as Horace, was the leading Roman lyric poet during the time of Augustus.-Life:...
mentions it in reference to his own diet, which he describes as very simple: "Me pascunt olivae, me cichorea, me malvae" ("As for me, olives, endives, and mallows provide sustenance"). Lord Monboddo describes his translation of an ancient epigram
Epigram
An epigram is a brief, interesting, usually memorable and sometimes surprising statement. Derived from the epigramma "inscription" from ἐπιγράφειν epigraphein "to write on inscribe", this literary device has been employed for over two millennia....
that demonstrates malva was planted upon the graves of the ancients, stemming from the belief that the dead could feed on such perfect plants.

Mallow, which grows wild in the Middle East, is widely used as a source of nourishment in wartime and periods of austerity. Known as خبّيزة (khubeza) in Arabic
Arabic language
Arabic is a name applied to the descendants of the Classical Arabic language of the 6th century AD, used most prominently in the Quran, the Islamic Holy Book...
, it is used as the main ingredient in a traditional Arab dish called by the same name; as well as in salads, soups and other dishes by the local Arab people.