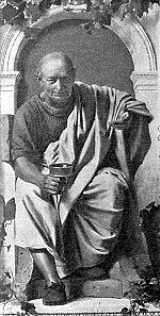 Overview
Quintus Horatius Flaccus (8 December 65 BCE – 27 November 8 BCE), known in the English-speaking
English language
English is a West Germanic language that arose in the Anglo-Saxon kingdoms of England and spread into what was to become south-east Scotland under the influence of the Anglian medieval kingdom of Northumbria...
world as Horace, was the leading Roman
Roman Empire
The Roman Empire was the post-Republican period of the ancient Roman civilization, characterised by an autocratic form of government and large territorial holdings in Europe and around the Mediterranean....
lyric poet
Lyric poetry
Lyric poetry is a genre of poetry that expresses personal and emotional feelings. In the ancient world, lyric poems were those which were sung to the lyre. Lyric poems do not have to rhyme, and today do not need to be set to music or a beat...
during the time of Augustus
Augustus
Augustus ;23 September 63 BC – 19 August AD 14) is considered the first emperor of the Roman Empire, which he ruled alone from 27 BC until his death in 14 AD.The dates of his rule are contemporary dates; Augustus lived under two calendars, the Roman Republican until 45 BC, and the Julian...
.
Born in the small town of Venusia
Venosa
Venosa is a town and comune in the province of Potenza, in the Southern Italian region of Basilicata, in the Vulture area. It is bounded by the comuni of Barile, Ginestra, Lavello, Maschito, Montemilone, Palazzo San Gervasio, Rapolla and Spinazzola....
in the border region between Apulia
Apulia
Apulia is a region in Southern Italy bordering the Adriatic Sea in the east, the Ionian Sea to the southeast, and the Strait of Òtranto and Gulf of Taranto in the south. Its most southern portion, known as Salento peninsula, forms a high heel on the "boot" of Italy. The region comprises , and...
and Lucania
Lucania
Lucania was an ancient district of southern Italy, extending from the Tyrrhenian Sea to the Gulf of Taranto. To the north it adjoined Campania, Samnium and Apulia, and to the south it was separated by a narrow isthmus from the district of Bruttium...
(Basilicata
Basilicata
Basilicata , also known as Lucania, is a region in the south of Italy, bordering on Campania to the west, Apulia to the north and east, and Calabria to the south, having one short southwestern coastline on the Tyrrhenian Sea between Campania in the northwest and Calabria in the southwest, and a...
), Horace was the son of a freed slave, who owned a small farm
Farm
A farm is an area of land, or, for aquaculture, lake, river or sea, including various structures, devoted primarily to the practice of producing and managing food , fibres and, increasingly, fuel. It is the basic production facility in food production. Farms may be owned and operated by a single...
in Venusia, and later moved to Rome to work as a coactor (a middleman between buyers and sellers at auctions, receiving 1% of the purchase price from each for his services).

What are Horaces' values? What did he do to sway the government to accept the traditional values?

By Horace's time Rome's population had grown to almost ____.
More

Translation: Life grants nothing to us mortals without hard work.

Translation: Leave all else to the gods.

Translation: As we speak cruel time is fleeing. Seize the day, believing as little as possible in the morrow.

Translation: In adversity, remember to keep an even mind.

Translation: Whoever cultivates the golden mean avoids both the poverty of a hovel and the envy of a palace.

Translation: It is sweet and honorable to die for one's country.
More
x