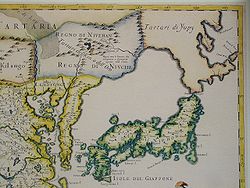 Maarten Gerritsz Vries, or Fries, also referred to as de Vries, (18 February 1589, Harlingen
Harlingen, Netherlands
Harlingen is a municipality and a city in the northern Netherlands, in the province of Friesland at the Wadden Sea. Harlingen is an old town with a long history of fishing and shipping....
- late 1647, at sea near Manila
Manila
Manila is the capital of the Philippines. It is one of the sixteen cities forming Metro Manila.Manila is located on the eastern shores of Manila Bay and is bordered by Navotas and Caloocan to the north, Quezon City to the northeast, San Juan and Mandaluyong to the east, Makati on the southeast,...
) was a 17th-century Dutch cartographer and explorer, the first Western European to leave an account of his visit to the Sea of Okhotsk
Sea of Okhotsk
The Sea of Okhotsk is a marginal sea of the western Pacific Ocean, lying between the Kamchatka Peninsula on the east, the Kuril Islands on the southeast, the island of Hokkaidō to the far south, the island of Sakhalin along the west, and a long stretch of eastern Siberian coast along the west and...
and the island of Sakhalin
Sakhalin
Sakhalin or Saghalien, is a large island in the North Pacific, lying between 45°50' and 54°24' N.It is part of Russia, and is Russia's largest island, and is administered as part of Sakhalin Oblast...
.

Not much is known about the life of de Vries. He was probably born in Harlingen, Netherlands
Harlingen, Netherlands
Harlingen is a municipality and a city in the northern Netherlands, in the province of Friesland at the Wadden Sea. Harlingen is an old town with a long history of fishing and shipping....
, in 1589 and spend many years in Taiwan
Taiwan
Taiwan , also known, especially in the past, as Formosa , is the largest island of the same-named island group of East Asia in the western Pacific Ocean and located off the southeastern coast of mainland China. The island forms over 99% of the current territory of the Republic of China following...
. He is best remembered for his 1643 expedition to the north-western Pacific Ocean
Pacific Ocean
The Pacific Ocean is the largest of the Earth's oceanic divisions. It extends from the Arctic in the north to the Southern Ocean in the south, bounded by Asia and Australia in the west, and the Americas in the east.At 165.2 million square kilometres in area, this largest division of the World...
to discover the coast of Tartaria
Tartaria
Săliştea , known as Cioara until 1965, is a commune located in Alba county, Romania. The old name of Cioara is still widely used, especially by local residents.It is composed of four villages: Mărgineni, Săliştea, Săliştea-Deal and Tărtăria....
, on account of Anthony van Diemen
Anthony van Diemen
Anthony van Diemen , Dutch colonial governor, was born in Culemborg in the Netherlands, the son of Meeus Anthonisz van Diemen and Christina Hoevenaar. In 1616 he moved to Amsterdam, in hope of improving his fortune as a merchant; in this he failed and was declared bankrupt...
, the governor in Batavia. This was the second expedition to look for legendary gold and silver islands in the Pacific, which nobody had discovered, after a failed expedition in 1639 under command of Matthijs Quast
Matthijs Quast
Matthijs Quast was a Dutch explorer in the seventeenth century. He had made several voyages for the VOC to Japan, China and Siam.-Pacific Expedition:Matthijs Quast has become known for an unsuccessful expedition to the Pacific....
.

The two ships, the Castricum under De Vries and the Breskens under Hendrick Cornelisz Schaep left Batavia, the capital of Dutch Java
Java
Java is an island of Indonesia. With a population of 135 million , it is the world's most populous island, and one of the most densely populated regions in the world. It is home to 60% of Indonesia's population. The Indonesian capital city, Jakarta, is in west Java...
, in February 1643. After a stop in Ternate
Ternate
Ternate is an island in the Maluku Islands of eastern Indonesia. It is located off the west coast of the larger island of Halmahera, the center of the powerful former Sultanate of Ternate....
in the Moluccas they continued their journey on April 4. On May 20 the two ships lost touch with each other in a storm, while off Hachijo Shima, an island some 290 km south of Tokyo
Tokyo
, ; officially , is one of the 47 prefectures of Japan. Tokyo is the capital of Japan, the center of the Greater Tokyo Area, and the largest metropolitan area of Japan. It is the seat of the Japanese government and the Imperial Palace, and the home of the Japanese Imperial Family...
, which, due to this setback, was christened Ongeluckich, or "Unlucky", Island by the Dutch. 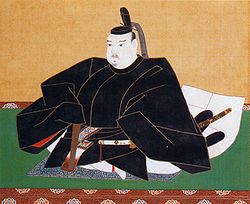 The Breskens arrived in a promising bay and was received friendly by the population of Yamada
Yamada, Iwate
is a town located in Shimohei District, Iwate, Japan.As of 2003, the town has an estimated population of 20,413 and a population density of 77.49 persons per km². The total area is 263.44 km²....
on Honshu
Honshu
is the largest island of Japan. The nation's main island, it is south of Hokkaido across the Tsugaru Strait, north of Shikoku across the Inland Sea, and northeast of Kyushu across the Kanmon Strait...
. Six weeks later the Breskens again sailed to Yamada, probably while they had a good time. In the evening they organized a party with a samurai
Samurai
is the term for the military nobility of pre-industrial Japan. According to translator William Scott Wilson: "In Chinese, the character 侍 was originally a verb meaning to wait upon or accompany a person in the upper ranks of society, and this is also true of the original term in Japanese, saburau...
and most probably some Japanese women. (It is not known what exactly happened, because the diary got lost in 1692, after Nicolaes Witsen
Nicolaes Witsen
Nicolaas or Nicolaes Witsen was mayor of Amsterdam thirteen times, between 1682-1706. In 1693 he became administrator of the VOC. In 1689 he was extraordinary-ambassador to the English court, and became Fellow of the Royal Society. In his free time he was cartographer, maritime writer, and an...
received it.) The next day, July 29, ten members of the crew, including the captain were invited by the women to come to a farm where they would receive fresh vegetables and fish. The unarmed crew was offered sake and rice, but captured, and sent to Morioka and Edo
Edo
, also romanized as Yedo or Yeddo, is the former name of the Japanese capital Tokyo, and was the seat of power for the Tokugawa shogunate which ruled Japan from 1603 to 1868...
for interrogation
Interrogation
Interrogation is interviewing as commonly employed by officers of the police, military, and Intelligence agencies with the goal of extracting a confession or obtaining information. Subjects of interrogation are often the suspects, victims, or witnesses of a crime...
. The Japanese feared Spanish Jesuits had come to land. As a result, bakufu officials were extremely anxious about the problem of coastal defenses. However after it was understood that the crew were Dutch and not Catholics, the problem to be solved became one of deciding by which procedure the Dutch should be released. After Jan van Elserac had arrived the shogun
Shogun
A was one of the hereditary military dictators of Japan from 1192 to 1867. In this period, the shoguns, or their shikken regents , were the de facto rulers of Japan though they were nominally appointed by the emperor...
Tokugawa Iemitsu
Tokugawa Iemitsu
Tokugawa Iemitsu was the third shogun of the Tokugawa dynasty. He was the eldest son of Tokugawa Hidetada, and the grandson of Tokugawa Ieyasu. Iemitsu ruled from 1623 to 1651.-Early life :...
sent them in December to Deshima. The crew had to wait nine months for the next ship to Taiwan
Taiwan
Taiwan , also known, especially in the past, as Formosa , is the largest island of the same-named island group of East Asia in the western Pacific Ocean and located off the southeastern coast of mainland China. The island forms over 99% of the current territory of the Republic of China following...
while the Breskens had left Honshu already at the end of July (without a captain) searching for the Gold and Silver Islands.

In the summer of 1643, the Castricum sailed by the southern Kuril Islands
Kuril Islands
The Kuril Islands , in Russia's Sakhalin Oblast region, form a volcanic archipelago that stretches approximately northeast from Hokkaidō, Japan, to Kamchatka, Russia, separating the Sea of Okhotsk from the North Pacific Ocean. There are 56 islands and many more minor rocks. It consists of Greater...
, visiting Kunashir, Iturup
Iturup
Iturup is the largest island of the South Kuril Islands. It is the northernmost island in the southern Kuril/Chishima islands, and though it is presently controlled by Russia, Japan also claims this island...
(which they named "Staten Island", although nowadays this name is only used to refer to Staten Island
Staten Island
Staten Island is a borough of New York City, New York, United States, located in the southwest part of the city. Staten Island is separated from New Jersey by the Arthur Kill and the Kill Van Kull, and from the rest of New York by New York Bay...
, in New York City
New York City
New York is the most populous city in the United States and the center of the New York Metropolitan Area, one of the most populous metropolitan areas in the world. New York exerts a significant impact upon global commerce, finance, media, art, fashion, research, technology, education, and...
), and Urup
Urup
Urup is an uninhabited volcanic island near in the south of the Kuril Islands chain in the Sea of Okhotsk in the northwest Pacific Ocean. Its name is derived from the Ainu language word for salmon trout.-Geography and climate:...
, where they met with the Ainus again, and which they named "Company Island" and claimed for the Netherlands.

The Dutch sailed north, without encountering any land, until being driven south-west toward the northern shores of Hokkaido
Hokkaido
, formerly known as Ezo, Yezo, Yeso, or Yesso, is Japan's second largest island; it is also the largest and northernmost of Japan's 47 prefectural-level subdivisions. The Tsugaru Strait separates Hokkaido from Honshu, although the two islands are connected by the underwater railway Seikan Tunnel...
. Then they sailed north again, discovering Cape Aniva (the southeastern tip of Sakhalin Island), Gulf of Patience
Gulf of Patience
Gulf of Patience is a large body of water off the southeastern coast of Sakhalin, Russia, between the main body of Sakhalin Island in the west and Cape Patience in the east...
(where they indeed had to be patient, waiting for the fog to clear), and Cape Patience east of it.

After another excursion, now east into the Pacific, the Castricum returned to Japanese waters and managed to meet with the Breskens off Kyushu
Kyushu
is the third largest island of Japan and most southwesterly of its four main islands. Its alternate ancient names include , , and . The historical regional name is referred to Kyushu and its surrounding islands....
. The two ships sailed to Fort Zeelandia (Taiwan)
Fort Zeelandia (Taiwan)
Fort Zeelandia was a fortress built over ten years from 1624–1634 by the Dutch Verenigde Oostindische Compagnie, in the town of Anping on the island of Formosa, present day Taiwan, during their 38-year rule over the western part of it...
and returned to Batavia in mid-December 1643.