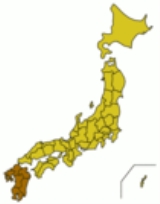 Encyclopedia
is the third largest island
Island
An island or isle is any piece of sub-continental land that is surrounded by water. Very small islands such as emergent land features on atolls can be called islets, cays or keys. An island in a river or lake may be called an eyot , or holm...
of Japan
Japan
Japan is an island nation in East Asia. Located in the Pacific Ocean, it lies to the east of the Sea of Japan, China, North Korea, South Korea and Russia, stretching from the Sea of Okhotsk in the north to the East China Sea and Taiwan in the south...
and most southwesterly of its four main islands
Japanese Archipelago
The , which forms the country of Japan, extends roughly from northeast to southwest along the northeastern coast of the Eurasia mainland, washing upon the northwestern shores of the Pacific Ocean...
. Its alternate ancient names include , , and . The historical regional name is referred to Kyushu and its surrounding islands.

In the 8th century Taihō Code
Taiho Code
The was an administrative reorganization enacted in 701 in Japan, at the end of the Asuka period. It was historically one of the . It was compiled at the direction of Prince Osakabe, Fujiwara no Fuhito and Awata no Mahito...
reforms, Dazaifu was established as a special administrative term for the region.

The island is mountainous, and Japan's most active volcano, Mt Aso
Mount Aso
is the largest active volcano in Japan, and is among the largest in the world. It stands in Aso Kujū National Park in Kumamoto Prefecture, on the island of Kyūshū. Its peak is 1592 m above sea level. Aso has one of the largest caldera in the world...
at 1591 metres (5,219.8 ft), is on Kyushu. There are many other signs of tectonic activity, including numerous areas of hot springs. The most famous of these are in Beppu, on the east shore, and around Mt. Aso, in central Kyushu.

Today's is a politically defined region that consists of the seven prefecture
Prefectures of Japan
The prefectures of Japan are the country's 47 subnational jurisdictions: one "metropolis" , Tokyo; one "circuit" , Hokkaidō; two urban prefectures , Osaka and Kyoto; and 43 other prefectures . In Japanese, they are commonly referred to as...
s on the island of Kyushu and also Okinawa Prefecture
Okinawa Prefecture
is one of Japan's southern prefectures. It consists of hundreds of the Ryukyu Islands in a chain over long, which extends southwest from Kyūshū to Taiwan. Okinawa's capital, Naha, is located in the southern part of Okinawa Island...
to the south:


The world’s 37th largest island by area, Kyushu is smaller than Spitsbergen
Spitsbergen
Spitsbergen is the largest and only permanently populated island of the Svalbard archipelago in Norway. Constituting the western-most bulk of the archipelago, it borders the Arctic Ocean, the Norwegian Sea and the Greenland Sea...
but larger than New Britain
New Britain
New Britain, or Niu Briten, is the largest island in the Bismarck Archipelago of Papua New Guinea. It is separated from the island of New Guinea by the Dampier and Vitiaz Straits and from New Ireland by St. George's Channel...
and Taiwan
Taiwan
Taiwan , also known, especially in the past, as Formosa , is the largest island of the same-named island group of East Asia in the western Pacific Ocean and located off the southeastern coast of mainland China. The island forms over 99% of the current territory of the Republic of China following...
. By population, it ranks 13th, having fewer inhabitants than Borneo
Borneo
Borneo is the third largest island in the world and is located north of Java Island, Indonesia, at the geographic centre of Maritime Southeast Asia....
or Sulawesi
Sulawesi
Sulawesi is one of the four larger Sunda Islands of Indonesia and is situated between Borneo and the Maluku Islands. In Indonesia, only Sumatra, Borneo, and Papua are larger in territory, and only Java and Sumatra have larger Indonesian populations.- Etymology :The Portuguese were the first to...
, but more than Salsette
Salsette Island
Salsette Island is an island in Maharashtra state on India's west coast. The metropolis of Mumbai and the city of Thane lie on this island, making it the 14th most populous island and the fourth most densely populated island in the world, after Migingo Island in Kenya, Ap Lei Chau in Hong Kong,...
(Mumbai
Mumbai
Mumbai , formerly known as Bombay in English, is the capital of the Indian state of Maharashtra. It is the most populous city in India, and the fourth most populous city in the world, with a total metropolitan area population of approximately 20.5 million...
) or Cuba
Cuba
The Republic of Cuba is an island nation in the Caribbean. The nation of Cuba consists of the main island of Cuba, the Isla de la Juventud, and several archipelagos. Havana is the largest city in Cuba and the country's capital. Santiago de Cuba is the second largest city...
.

Parts of Kyushu have a subtropical climate, particularly Miyazaki and Kagoshima prefectures. Major agricultural products are rice
Rice
Rice is the seed of the monocot plants Oryza sativa or Oryza glaberrima . As a cereal grain, it is the most important staple food for a large part of the world's human population, especially in East Asia, Southeast Asia, South Asia, the Middle East, and the West Indies...
, tea
Tea
Tea is an aromatic beverage prepared by adding cured leaves of the Camellia sinensis plant to hot water. The term also refers to the plant itself. After water, tea is the most widely consumed beverage in the world...
, tobacco
Tobacco
Tobacco is an agricultural product processed from the leaves of plants in the genus Nicotiana. It can be consumed, used as a pesticide and, in the form of nicotine tartrate, used in some medicines...
, sweet potato
Sweet potato
The sweet potato is a dicotyledonous plant that belongs to the family Convolvulaceae. Its large, starchy, sweet-tasting, tuberous roots are an important root vegetable. The young leaves and shoots are sometimes eaten as greens. Of the approximately 50 genera and more than 1,000 species of...
es, and soy; silk
Silk
Silk is a natural protein fiber, some forms of which can be woven into textiles. The best-known type of silk is obtained from the cocoons of the larvae of the mulberry silkworm Bombyx mori reared in captivity...
is also widely produced. The island is noted for various types of porcelain
Porcelain
Porcelain is a ceramic material made by heating raw materials, generally including clay in the form of kaolin, in a kiln to temperatures between and...
, including Arita, Imari, Satsuma, and Karatsu. Heavy industry is concentrated in the north around Fukuoka, Kitakyushu, Nagasaki, and Oita and includes chemicals, automobiles, semiconductors, and metal processing.

Besides the volcanic area of the south, there are significant mud hot springs in the northern part of the island, around Beppu. These springs are the site of occurrence of certain extremophile
Extremophile
An extremophile is an organism that thrives in physically or geochemically extreme conditions that are detrimental to most life on Earth. In contrast, organisms that live in more moderate environments may be termed mesophiles or neutrophiles...
micro-organisms, that are capable of surviving in extremely hot environments.

Major universities and colleges in Kyushu: