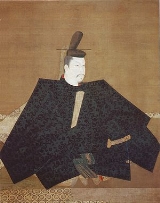 Overview
A was one of the (usually) hereditary military dictators of Japan
Japan
Japan is an island nation in East Asia. Located in the Pacific Ocean, it lies to the east of the Sea of Japan, China, North Korea, South Korea and Russia, stretching from the Sea of Okhotsk in the north to the East China Sea and Taiwan in the south...
from 1192 to 1867. In this period, the shoguns, or their shikken
Shikken
The was the regent for the shogun in the Kamakura shogunate in Japan. The post was monopolized by the Hōjō clan, and this system only existed once in Japanese history, between 1203 and 1333...
regents (1203–1333), were the de facto rulers of Japan though they were nominally appointed by the emperor. When Portuguese
Portugal
Portugal , officially the Portuguese Republic is a country situated in southwestern Europe on the Iberian Peninsula. Portugal is the westernmost country of Europe, and is bordered by the Atlantic Ocean to the West and South and by Spain to the North and East. The Atlantic archipelagos of the...
explorers first came into contact with the Japanese (see Nanban period), they described Japanese conditions in analogy, likening the emperor, with great symbolic authority but little political power, to the Pope
Pope
The Pope is the Bishop of Rome, a position that makes him the leader of the worldwide Catholic Church . In the Catholic Church, the Pope is regarded as the successor of Saint Peter, the Apostle...
, and the shogun to secular European rulers, e.g.

what led to the "rise of the shogun"?

what led to the "rise of the shogun"???
More

1867    The 15th and the last military Shogun of the Tokugawa shogunate resigns in Japan, returning his power to the Emperor of Japan and thence to the re-established civil government of Japan