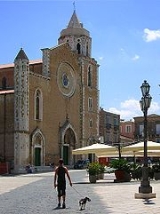 Encyclopedia
Lucera is a town and comune
Comune
In Italy, the comune is the basic administrative division, and may be properly approximated in casual speech by the English word township or municipality.-Importance and function:...
in the Province of Foggia
Province of Foggia
The Province of Foggia is a province in the Apulia region of Italy.This province is also known as Capitanata, originally Catapanata, because during the Middle Ages it was governed by a catapan, as part of the Catapanate of Italy...
, in the Apulia
Apulia
Apulia is a region in Southern Italy bordering the Adriatic Sea in the east, the Ionian Sea to the southeast, and the Strait of Òtranto and Gulf of Taranto in the south. Its most southern portion, known as Salento peninsula, forms a high heel on the "boot" of Italy. The region comprises , and...
region of southern Italy
Italy
Italy , officially the Italian Republic languages]] under the European Charter for Regional or Minority Languages. In each of these, Italy's official name is as follows:;;;;;;;;), is a unitary parliamentary republic in South-Central Europe. To the north it borders France, Switzerland, Austria and...
.

Lucera is an ancient city founded in Daunia
Daunia
250px|thumb|Example of Daunian ceramics.The Daunia is a historical and geographical region in Apulia, southern Italy, mostly coincident with modern Province of Foggia...
, the centre of Dauni territory (in present day Apulia). Archeological excavations show the presence of a bronze age
Bronze Age
The Bronze Age is a period characterized by the use of copper and its alloy bronze as the chief hard materials in the manufacture of some implements and weapons. Chronologically, it stands between the Stone Age and Iron Age...
village inside the city boundaries. Lucera was probably named after either Lucius, a mythical Dauno king, or a temple dedicated to the goddess Lux Cereris. A third possibility is that the city was founded and named by the Etruscans
Etruscan civilization
Etruscan civilization is the modern English name given to a civilization of ancient Italy in the area corresponding roughly to Tuscany. The ancient Romans called its creators the Tusci or Etrusci...
, in which case the name probably means Holy Wood (luc = wood, eri = holy). 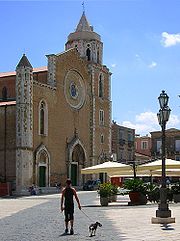 In 321 BC, the Roman army was deceived into thinking Lucera was under siege by the Samnite
Samnium
Samnium is a Latin exonym for a region of south or south and central Italy in Roman times. The name survives in Italian today, but today's territory comprising it is only a small portion of what it once was. The populations of Samnium were called Samnites by the Romans...
s. Hurrying to relieve their allies the army walked into an ambush and were defeated at the famous Battle of the Caudine Forks
Battle of the Caudine Forks
The Battle of Caudine Forks, 321 BC, was a decisive event of the Second Samnite War. Its designation as a battle is a mere historical formality: there was no fighting and there were no casualties. The Romans were trapped in a waterless place by the Samnites before they knew what was happening and...
. The Samnites occupied Lucera but were thrown out after a revolt. The city sought Roman protection and in 320 BC was granted the status of Colonia Togata, which meant it was ruled by the Roman Senate. In order to strengthen the ties between the two cities, 2,500 Romans moved to Lucera. From then on, Lucera was known as a steadfast supporter of Rome.

During the civil wars of the late Republic, Pompey
Pompey
Gnaeus Pompeius Magnus, also known as Pompey or Pompey the Great , was a military and political leader of the late Roman Republic...
set up his headquarters in Lucera, but abandoned the city when Julius Caesar
Julius Caesar
Gaius Julius Caesar was a Roman general and statesman and a distinguished writer of Latin prose. He played a critical role in the gradual transformation of the Roman Republic into the Roman Empire....
approached. Lucera quickly switched its allegiance and Caesar's clemency spared it from harm. In the next civil war between Octavian and Mark Anthony
Mark Antony
Marcus Antonius , known in English as Mark Antony, was a Roman politician and general. As a military commander and administrator, he was an important supporter and loyal friend of his mother's cousin Julius Caesar...
the city did not escape as lightly. After the war, Octavian settled many veteran soldiers on the lands of the ruined city. This helped Lucera recover quickly and marked an era of renewed prosperity. Many of the surviving Roman landmarks hail from this Augustan period, among them the Luceran amphitheatre.

With the fall of the Western Roman Empire the city of Lucera entered into a state of decline. In 663 AD, it was captured from the Lombards
Lombards
The Lombards , also referred to as Longobards, were a Germanic tribe of Scandinavian origin, who from 568 to 774 ruled a Kingdom in Italy...
and destroyed by the Eastern Roman Emperor Constans II
Constans II
Constans II , also called Constantine the Bearded , was Byzantine emperor from 641 to 668. He also was the last emperor to become consul in 642, becoming the last Roman consul in history....
.

In 1224 AD, Holy Roman Emperor
Holy Roman Emperor
The Holy Roman Emperor is a term used by historians to denote a medieval ruler who, as German King, had also received the title of "Emperor of the Romans" from the Pope...
Frederick II
Frederick II, Holy Roman Emperor
Frederick II , was one of the most powerful Holy Roman Emperors of the Middle Ages and head of the House of Hohenstaufen. His political and cultural ambitions, based in Sicily and stretching through Italy to Germany, and even to Jerusalem, were enormous...
, responding to religious uprisings in Sicily
Sicily
Sicily is a region of Italy, and is the largest island in the Mediterranean Sea. Along with the surrounding minor islands, it constitutes an autonomous region of Italy, the Regione Autonoma Siciliana Sicily has a rich and unique culture, especially with regard to the arts, music, literature,...
, expelled all Muslims from the island, transferring many to Lucera - "Lugêrah", as she was known in Arabic - over the next two decades. In this controlled environment, they could not challenge royal authority and they benefited the crown in taxes and military service. Their numbers eventually reached between 15,000 and 20,000, leading Lucera to be called Lucaera Saracenorum because it represented the last stronghold of Islamic presence in Italy. During peacetime, Muslims in Lucera were predominately farmers. They grew durum
Durum
Durum wheat or macaroni wheat is the only tetraploid species of wheat of commercial importance that is widely cultivated today...
wheat, barley
Barley
Barley is a major cereal grain, a member of the grass family. It serves as a major animal fodder, as a base malt for beer and certain distilled beverages, and as a component of various health foods...
, legumes, grapes and other fruits. Muslims also kept bees for honey
Honey
Honey is a sweet food made by bees using nectar from flowers. The variety produced by honey bees is the one most commonly referred to and is the type of honey collected by beekeepers and consumed by humans...
.

The colony thrived for 75 years until it was sacked in 1300 by Christian forces under the command of Charles II of Naples
Charles II of Naples
Charles II, known as "the Lame" was King of Naples, King of Albania, Prince of Salerno, Prince of Achaea and Count of Anjou.-Biography:...
. The city's Muslim inhabitants were exiled or sold into slavery, with many finding asylum in Albania
Albania
Albania , officially known as the Republic of Albania , is a country in Southeastern Europe, in the Balkans region. It is bordered by Montenegro to the northwest, Kosovo to the northeast, the Republic of Macedonia to the east and Greece to the south and southeast. It has a coast on the Adriatic Sea...
across the Adriatic Sea
Adriatic Sea
The Adriatic Sea is a body of water separating the Italian Peninsula from the Balkan peninsula, and the system of the Apennine Mountains from that of the Dinaric Alps and adjacent ranges...
. Their abandoned mosques were demolished, and churches were usually built in their place, including the cathedral S. Maria della Vittoria.

After the Muslims were removed from Lucera, Charles tried to settle Christians in the city. Those Muslims that converted to Christianity got part of their property back, but none was restored his former position of political or economic influence. As time progressed, grain production fell in the city, and in 1339 the city was hit by a famine. Christians were allowed to farm as the Muslims.

A low genetic Northwest African contribution among today's inhabitants near the region of Lucera was revealed by a very recent genetic study in 2009. 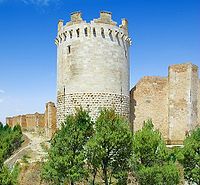