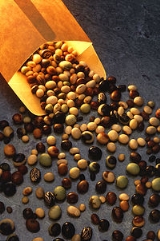 Overview
A legume (ˈlɛɡuːm) in botanical writing
Botany
Botany, plant science, or plant biology is a branch of biology that involves the scientific study of plant life. Traditionally, botany also included the study of fungi, algae and viruses...
is a plant
Plant
Plants are living organisms belonging to the kingdom Plantae. Precise definitions of the kingdom vary, but as the term is used here, plants include familiar organisms such as trees, flowers, herbs, bushes, grasses, vines, ferns, mosses, and green algae. The group is also called green plants or...
in the family Fabaceae
Fabaceae
The Fabaceae or Leguminosae, commonly known as the legume, pea, or bean family, is a large and economically important family of flowering plants. The group is the third largest land plant family, behind only the Orchidaceae and Asteraceae, with 730 genera and over 19,400 species...
(or Leguminosae), or a fruit
Fruit
In broad terms, a fruit is a structure of a plant that contains its seeds.The term has different meanings dependent on context. In non-technical usage, such as food preparation, fruit normally means the fleshy seed-associated structures of certain plants that are sweet and edible in the raw state,...
of these specific plants. A
legume fruit is a simple dry fruit that develops from a simple carpel and usually dehisces
Dehiscence (botany)
Dehiscence is the opening, at maturity, in a pre-defined way, of a plant structure, such as a fruit, anther, or sporangium, to release its contents. Sometimes this involves the complete detachment of a part. Structures that open in this way are said to be dehiscent...
(opens along a seam) on two sides. A common name for this type of fruit is a pod, although the term "pod" is also applied to a few other fruit types, such as vanilla
Vanilla
Vanilla is a flavoring derived from orchids of the genus Vanilla, primarily from the Mexican species, Flat-leaved Vanilla . The word vanilla derives from the Spanish word "", little pod...
and radish
Radish
The radish is an edible root vegetable of the Brassicaceae family that was domesticated in Europe, in pre-Roman times. They are grown and consumed throughout the world. Radishes have numerous varieties, varying in size, color and duration of required cultivation time...
.