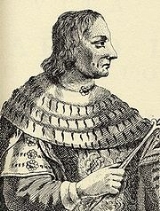 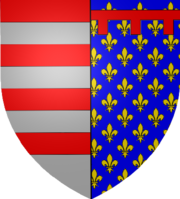 Charles II, known as "the Lame" (French
French language
French is a Romance language spoken as a first language in France, the Romandy region in Switzerland, Wallonia and Brussels in Belgium, Monaco, the regions of Quebec and Acadia in Canada, and by various communities elsewhere. Second-language speakers of French are distributed throughout many parts...
le Boiteux, Italian
Italian language
Italian is a Romance language spoken mainly in Europe: Italy, Switzerland, San Marino, Vatican City, by minorities in Malta, Monaco, Croatia, Slovenia, France, Libya, Eritrea, and Somalia, and by immigrant communities in the Americas and Australia...
lo Zoppo) (1254 – 5 May 1309) was King of Naples, King of Albania
King of Albania
While the medieval Angevin Kingdom of Albania was a monarchy, it did not encompass the entirety of the modern state of Albania. The latter has been a kingdom on two occasions. The first time was after it was declared independent in 1912...
, Prince of Salerno, Prince of Achaea and Count of Anjou.

During the Sicilian Vespers
Sicilian Vespers
The Sicilian Vespers is the name given to the successful rebellion on the island of Sicily that broke out on the Easter of 1282 against the rule of the French/Angevin king Charles I, who had ruled the Kingdom of Sicily since 1266. Within six weeks three thousand French men and women were slain by...
, he had been captured by Roger of Lauria
Roger of Lauria
Roger of Lauria, Loria or de Llúria in Catalan , was an Sicilian-Aragonese admiral, who was the commander of the fleet of Aragon during the War of the Sicilian Vespers. He was probably the most successful and talented naval tactician of the medieval period...
in the naval battle at Naples
Battle of the Gulf of Naples
The naval Battle of the Gulf of Naples took place on 5 June 1284 in the south of the Gulf of Naples, Italy, when an Aragonese-Sicilian galley fleet commanded by Roger of Lauria defeated a Neapolitan galley fleet commanded by Charles of Salerno and captured Charles.Charles' Genoese allies had...
in 1284. When his father died in 1285, he was still a prisoner of Peter III of Aragon
Peter III of Aragon
Peter the Great was the King of Aragon of Valencia , and Count of Barcelona from 1276 to his death. He conquered Sicily and became its king in 1282. He was one of the greatest of medieval Aragonese monarchs.-Youth and succession:Peter was the eldest son of James I of Aragon and his second wife...
.

In 1288, King Edward I of England
Edward I of England
Edward I , also known as Edward Longshanks and the Hammer of the Scots, was King of England from 1272 to 1307. The first son of Henry III, Edward was involved early in the political intrigues of his father's reign, which included an outright rebellion by the English barons...
mediated to make peace, and Charles was liberated on the condition that he was to retain Naples alone. Sicily was left to the Aragonese. Charles was also to induce his cousin Charles of Valois
Charles of Valois
Charles of Valois was the fourth son of Philip III of France and Isabella of Aragon. His mother was a daughter of James I of Aragon and Yolande of Hungary. He was a member of the House of Capet and founded the House of Valois...
to renounce, for twenty thousand pounds of silver, the kingdom of Aragon, which had been given to him by Pope Martin IV
Pope Martin IV
Pope Martin IV, born Simon de Brion held the papacy from February 21, 1281 until his death....
to punish Peter for having invaded Sicily, but which the Valois had never effectively occupied.

Charles was then released, leaving three of his sons and sixty Provençal nobles as hostages, promising to pay 30,000 marks and to return a prisoner if the conditions were not fulfilled within three years. He went to Rieti
Rieti
Rieti is a city and comune in Lazio, central Italy, with a population of c. 47,700. It is the capital of province of Rieti.The town centre rests on a small hilltop, commanding a wide plain at the southern edge of an ancient lake. The area is now the fertile basin of the Velino River...
, where the new Pope Nicholas IV
Pope Nicholas IV
Pope Nicholas IV , born Girolamo Masci, was Pope from February 22, 1288 to April 4, 1292. A Franciscan friar, he had been legate to the Greeks under Pope Gregory X in 1272, succeeded Bonaventure as Minister General of his religious order in 1274, was made Cardinal Priest of Santa Prassede and...
immediately absolved him from all the conditions he had sworn to observe, crowned him King of Sicily in 1289, and excommunicated King Alfonso III of Aragon
Alfonso III of Aragon
Alfonso III , called the Liberal or the Free , was the King of Aragon and Count of Barcelona from 1285...
. Charles of Valois, in alliance with Castile
Crown of Castile
The Crown of Castile was a medieval and modern state in the Iberian Peninsula that formed in 1230 as a result of the third and definitive union of the crowns and parliaments of the kingdoms of Castile and León upon the accession of the then King Ferdinand III of Castile to the vacant Leonese throne...
, prepared to take possession of Aragon
Aragon
Aragon is a modern autonomous community in Spain, coextensive with the medieval Kingdom of Aragon. Located in northeastern Spain, the Aragonese autonomous community comprises three provinces : Huesca, Zaragoza, and Teruel. Its capital is Zaragoza...
, reopening the Aragonese Crusade
Aragonese Crusade
The Aragonese Crusade or Crusade of Aragon, a part of the larger War of the Sicilian Vespers, was declared by Pope Martin IV against the King of Aragon, Peter III the Great, in 1284 and 1285...
. Alfonso, being hard pressed, agreed to the conditions of the Treaty of Tarascon
Treaty of Tarascon
The Treaty of Tarascon was an accord between Pope Nicholas IV, Philip IV of France, Charles II of Naples, and Alfonso III of Aragón that was intended to end the Aragonese Crusade, an episode in the War of the Sicilian Vespers...
: he had to promise to withdraw the troops he had sent to help his brother James
James II of Aragon
James II , called the Just was the King of Sicily from 1285 to 1296 and King of Aragon and Valencia and Count of Barcelona from 1291 to 1327. In 1297 he was granted the Kingdom of Sardinia and Corsica...
in Sicily, to renounce all rights over the island, and pay a tribute to the Holy See.

Alfonso died childless in 1291 before the treaty could be carried out, and James took possession of Aragon, leaving the government of Sicily to the third brother Frederick
Frederick III of Sicily
Frederick II was the regent and subsequently King of Sicily from 1295 until his death. He was the third son of Peter III of Aragon and served in the War of the Sicilian Vespers on behalf of his father and brothers, Alfonso and James...
.

The new Pope Boniface VIII
Pope Boniface VIII
Pope Boniface VIII , born Benedetto Gaetani, was Pope of the Catholic Church from 1294 to 1303. Today, Boniface VIII is probably best remembered for his feuds with Dante, who placed him in the Eighth circle of Hell in his Divina Commedia, among the Simonists.- Biography :Gaetani was born in 1235 in...
, elected in 1294 at Naples
Naples
Naples is a city in Southern Italy, situated on the country's west coast by the Gulf of Naples. Lying between two notable volcanic regions, Mount Vesuvius and the Phlegraean Fields, it is the capital of the region of Campania and of the province of Naples...
under the auspices of King Charles, mediated between the latter and James, and the dishonourable Treaty of Anagni
Treaty of Anagni
The Treaty of Anagni was an accord between the Pope Boniface VIII, James II of Aragon, Philip IV of France, Charles II of Naples, and James II of Majorca. It was signed on 20 June 1295 at Anagni, in what is now central Italy. The chief purpose was to confirm the Treaty of Tarascon of 1291, which...
was signed: James was to marry Charles’s daughter Bianca
Blanche of Anjou
Blanche of Anjou was the second Queen consort of James II of Aragon. She was a member of the Capetian House of Anjou, she is also known as Blanche of Naples-Family:...
and was promised the investiture by the pope of Sardinia and Corsica, while he was to leave the Angevin a free hand in Sicily and even to assist him if the Sicilians resisted.

An attempt was made to bribe Frederick into consenting to this arrangement, but being backed up by his people he refused, and was afterwards crowned King of Sicily. The ensuing war was fought on land and sea but Charles, though aided by the pope, his cousin Charles of Valois and James, was unable to conquer the island, and his son the prince of Taranto
Philip I of Taranto
Philip I of Taranto : of the Angevin house, was titular Emperor of Constantinople , despot of Epirus, King of Albania, Prince of Achaea and Taranto, and Lord of Durazzo....
was taken prisoner at the battle of La Falconara in 1299. Peace was at last made in 1302 at Caltabellotta
Peace of Caltabellotta
The Peace of Caltabellotta, signed on 31 August, 1302, was the last of a series of treaties, including those of Tarascon and Anagni, designed to end the conflict between the Houses of Anjou and Barcelona for ascendancy in the Mediterranean and especially Sicily and the Mezzogiorno.The peace divided...
. Charles gave up all rights to Sicily and agreed to the marriage of his daughter Eleanor and King Frederick; the treaty was ratified by the pope in 1303. Charles spent his last years quietly in Naples, which city he improved and embellished.

He died in Naples in May 1309, and was succeeded by his son Robert the Wise
Robert of Naples
Robert of Anjou , known as Robert the Wise was King of Naples, titular King of Jerusalem and Count of Provence and Forcalquier from 1309 to 1343, the central figure of Italian politics of his time. He was the third but eldest surviving son of King Charles II of Naples the Lame and Maria of Hungary...
.