Encyclopedia
Loch is the Irish
Irish language
Irish , also known as Irish Gaelic, is a Goidelic language of the Indo-European language family, originating in Ireland and historically spoken by the Irish people. Irish is now spoken as a first language by a minority of Irish people, as well as being a second language of a larger proportion of...
and Scottish Gaelic word for a lake
Lake
A lake is a body of relatively still fresh or salt water of considerable size, localized in a basin, that is surrounded by land. Lakes are inland and not part of the ocean and therefore are distinct from lagoons, and are larger and deeper than ponds. Lakes can be contrasted with rivers or streams,...
or a sea inlet
Inlet
An inlet is a narrow body of water between islands or leading inland from a larger body of water, often leading to an enclosed body of water, such as a sound, bay, lagoon or marsh. In sea coasts an inlet usually refers to the actual connection between a bay and the ocean and is often called an...
. It has been anglicised
Anglicisation
Anglicisation, or anglicization , is the process of converting verbal or written elements of any other language into a form that is more comprehensible to an English speaker, or, more generally, of altering something such that it becomes English in form or character.The term most often refers to...
as lough, although this is pronounced the same way as loch. Some lochs could also be called a firth
Firth
Firth is the word in the Lowland Scots language and in English used to denote various coastal waters in Scotland and England. In mainland Scotland it is used to describe a large sea bay, or even a strait. In the Northern Isles it more usually refers to a smaller inlet...
, fjord
Fjord
Geologically, a fjord is a long, narrow inlet with steep sides or cliffs, created in a valley carved by glacial activity.-Formation:A fjord is formed when a glacier cuts a U-shaped valley by abrasion of the surrounding bedrock. Glacial melting is accompanied by rebound of Earth's crust as the ice...
, estuary
Estuary
An estuary is a partly enclosed coastal body of water with one or more rivers or streams flowing into it, and with a free connection to the open sea....
, strait
Strait
A strait or straits is a narrow, typically navigable channel of water that connects two larger, navigable bodies of water. It most commonly refers to a channel of water that lies between two land masses, but it may also refer to a navigable channel through a body of water that is otherwise not...
or bay
Bay
A bay is an area of water mostly surrounded by land. Bays generally have calmer waters than the surrounding sea, due to the surrounding land blocking some waves and often reducing winds. Bays also exist as an inlet in a lake or pond. A large bay may be called a gulf, a sea, a sound, or a bight...
. Sea-inlet lochs are often called sea lochs or sea loughs. 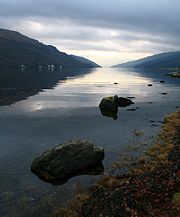 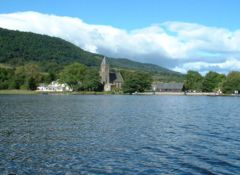 Lowland Scots orthography, like Scottish Gaelic and Irish, represents x with ch, so the word was borrowed with identical spelling.

English borrowed the word separately from a number of loughs in Northumbria and Cumbria. Earlier forms of English included the sound /x/ as gh (compare Scots bricht with English bright). This form was therefore used when the English settled Ireland. However, by the time Scotland and England joined under a single parliament, English had lost the /x/ sound, so the Scots convention of using CH remained, hence the modern Scottish English loch.

Many of the loughs in Northern England have also previously been called "meres" (a Northern English dialect word for "lake" and an archaic Standard English word meaning "a lake that is broad in relation to its depth") such as the Black Lough in Northumberland
Northumberland
Northumberland is the northernmost ceremonial county and a unitary district in North East England. For Eurostat purposes Northumberland is a NUTS 3 region and is one of three boroughs or unitary districts that comprise the "Northumberland and Tyne and Wear" NUTS 2 region...
. However, reference to the latter as lochs or loughs (lower case initial), rather than as lakes, inlets and so on, is unusual.

Although there is no strict size definition, a small loch is often known as a lochan (so spelled also in Scottish Gaelic; in Irish it is spelled lochán).

Perhaps the most famous Scottish loch is Loch Ness
Loch Ness
Loch Ness is a large, deep, freshwater loch in the Scottish Highlands extending for approximately southwest of Inverness. Its surface is above sea level. Loch Ness is best known for the alleged sightings of the cryptozoological Loch Ness Monster, also known affectionately as "Nessie"...
, although there are other large examples such as Loch Awe
Loch Awe
Loch Awe is a large body of water in Argyll and Bute, Scotland. It has also given its name to a village on its banks, variously known as Loch Awe, or Lochawe. There are islands within the loch such as Innis Chonnell and Inishail.- The loch :It is the third largest freshwater loch in Scotland with...
, Loch Lomond
Loch Lomond
Loch Lomond is a freshwater Scottish loch, lying on the Highland Boundary Fault. It is the largest lake in Great Britain by surface area. The lake contains many islands, including Inchmurrin, the largest fresh-water island in the British Isles, although the lake itself is smaller than many Irish...
and Loch Tay
Loch Tay
Loch Tay is a freshwater loch in the central highlands of Scotland, in the district of Perthshire.It is a long narrow loch of around 14 miles long, and typically around 1 to 1½ miles wide, following the line of the valley from the south west to north east...
.

Examples of sea lochs in Scotland include Loch Long
Loch Long
Loch Long is a body of water in Argyll and Bute, Scotland. The sea loch extends from the Firth of Clyde at its southwestern end. It measures approximately 20 miles in length, with a width of between one and two miles...
, Loch Fyne
Loch Fyne
Loch Fyne is a sea loch on the west coast of Argyll and Bute, Scotland. It extends inland from the Sound of Bute, making it the longest of the sea lochs...
, Loch Linnhe
Loch Linnhe
Loch Linnhe is a sea loch on the west coast of Scotland....
, Loch Eriboll
Loch Eriboll
Loch Eriboll is a long sea loch on the north coast of Scotland, which has been used for centuries as a deep water anchorage as it is safe from the often stormy seas of Cape Wrath and the Pentland Firth...
, Loch Tristan, Trisloch.


The uses of lochs

Some new reservoirs for hydroelectric schemes have been given names faithful to the names for natural bodies of water - for example: the Loch Sloy scheme, and Lochs Laggan
Loch Laggan
Loch Laggan is a freshwater loch situated east of Fort William, in Lochaber, Highland, Scotland. The A86 road from Spean Bridge to Kingussie follows along its north bank...
and Treig
Loch Treig
Loch Treig is a 9 km freshwater loch situated in a steep-sided glen 20 km east of Fort William, in Lochaber, Highland, Scotland...
(which form part of the Lochaber
Lochaber
District of Lochaber 1975 to 1996Highland council area shown as one of the council areas of ScotlandLochaber is one of the 16 ward management areas of the Highland Council of Scotland and one of eight former local government districts of the two-tier Highland region...
hydroelectric scheme near Fort William). Other expanses are simply called reservoirs, e.g.: Blackwater Reservoir
Blackwater Reservoir
The Blackwater Reservoir is a reservoir created behind a dam in the mountains above Kinlochleven, Lochaber, Highland, Scotland. At over 914 m long, the dam is the longest in the Highlands....
above Kinlochleven
Kinlochleven
Kinlochleven is a village in Lochaber, in the Scottish Highlands and lies at the eastern end of Loch Leven, a sea loch cutting into the western Scottish Highlands. To the north lie the Mamores ridge; to the south lie the mountains flanking Glen Coe...
.

Scotland has very few natural water bodies actually called 'lakes'. The Lake of Menteith
Lake of Menteith
The Lake of Menteith , is a loch in Scotland, located on the Carse of Stirling, the flood plain of the upper reaches of the rivers Forth and Teith, upstream of Stirling. Until the early 19th century, the more usual Scottish name of Loch of Menteith was used...
, an Anglicisation
Anglicisation
Anglicisation, or anglicization , is the process of converting verbal or written elements of any other language into a form that is more comprehensible to an English speaker, or, more generally, of altering something such that it becomes English in form or character.The term most often refers to...
of the Scots
Scots language
Scots is the Germanic language variety spoken in Lowland Scotland and parts of Ulster . It is sometimes called Lowland Scots to distinguish it from Scottish Gaelic, the Celtic language variety spoken in most of the western Highlands and in the Hebrides.Since there are no universally accepted...
Laich o Menteith meaning a "low-lying bit of land in Menteith", and applied to the loch there because of the similarity of the sounds of the words laich and lake. The Lake of the Hirsel
Lake of the Hirsel
The Lake of the Hirsel or Hirsel Lake is an artificial body of water near Coldstream in Berwickshire in Scotland. It is set in the grounds of The Hirsel, home of the Home family and of the late Sir Alec Douglas-Home.It covers around...
, Pressmennan Lake
Pressmennan Lake
Pressmennan Lake is a lake in East Lothian in Scotland.It is an artificial reservoir constructed in 1819. It lies in a gully in the Lammermuir Hills, above the village of Stenton in East Lothian...
and Lake Louise are other bodies of water in Scotland which are called lakes and all are man-made.

The word "loch" is used as a shibboleth
Shibboleth
A shibboleth is a custom, principle, or belief distinguishing a particular class or group of people, especially a long-standing one regarded as outmoded or no longer important...
to identify natives of England, because the fricative x sound is used in Scotland whereas most English people pronounce the word like "lock".


Lochs beyond Scotland and Ireland

As "loch" is a common Gaelic word, it is also found as the root of several Manx
Manx language
Manx , also known as Manx Gaelic, and as the Manks language, is a Goidelic language of the Indo-European language family, historically spoken by the Manx people. Only a small minority of the Island's population is fluent in the language, but a larger minority has some knowledge of it...
placenames.

The United States
United States
The United States of America is a federal constitutional republic comprising fifty states and a federal district...
naval port of Pearl Harbor
Pearl Harbor
Pearl Harbor, known to Hawaiians as Puuloa, is a lagoon harbor on the island of Oahu, Hawaii, west of Honolulu. Much of the harbor and surrounding lands is a United States Navy deep-water naval base. It is also the headquarters of the U.S. Pacific Fleet...
, located on the south coast of the main Hawaii
Hawaii
Hawaii is the newest of the 50 U.S. states , and is the only U.S. state made up entirely of islands. It is the northernmost island group in Polynesia, occupying most of an archipelago in the central Pacific Ocean, southwest of the continental United States, southeast of Japan, and northeast of...
an island of Oahu
Oahu
Oahu or Oahu , known as "The Gathering Place", is the third largest of the Hawaiian Islands and most populous of the islands in the U.S. state of Hawaii. The state capital Honolulu is located on the southeast coast...
, is one of a complex of sea inlets. Several of these are named as lochs, viz. South East Loch, Merry Loch, East Loch, Middle Loch and West Loch.