Encyclopedia
Loch Eriboll is a 16 km (9.9 mi) long sea loch on the north coast of Scotland
Scotland
Scotland is a country that is part of the United Kingdom. Occupying the northern third of the island of Great Britain, it shares a border with England to the south and is bounded by the North Sea to the east, the Atlantic Ocean to the north and west, and the North Channel and Irish Sea to the...
, which has been used for centuries as a deep water anchorage as it is safe from the often stormy seas of Cape Wrath
Cape Wrath
Cape Wrath is a cape in Sutherland, Highland, in northern Scotland. It is the most northwesterly point on the island of Great Britain. The land between the Kyle of Durness and the lighthouse that is situated right at the tip, is known as the Parph, two hundred and seven square kilometers of...
and the Pentland Firth
Pentland Firth
The Pentland Firth , which is actually more of a strait than a firth, separates the Orkney Islands from Caithness in the north of Scotland.-Etymology:...
. It is named after the village of Eriboll
Eriboll
Eriboll is a village in Sutherland, Scotland on the south eastern shore of the sea loch, Loch Eriboll. It lies in the northern part of the former county of Sutherland....
on its eastern shore.

Bronze Age
Bronze Age
The Bronze Age is a period characterized by the use of copper and its alloy bronze as the chief hard materials in the manufacture of some implements and weapons. Chronologically, it stands between the Stone Age and Iron Age...
remains can be found in the area, including a souterrain
Souterrain
Souterrain is a name given by archaeologists to a type of underground structure associated mainly with the Atlantic Iron Age. These structures appear to have been brought northwards from Gaul during the late Iron Age. Regional names include earth houses, fogous and Pictish houses...
and a very well-preserved wheelhouse
Atlantic roundhouse
In archaeology, an Atlantic roundhouse is an Iron Age stone building found in the northern and western parts of mainland Scotland, the Northern Isles and the Hebrides.-Types of structure:...
on the hillside above the west shore. A small scale lime
Agricultural lime
Agricultural lime, also called aglime, agricultural limestone, garden lime or liming, is a soil additive made from pulverized limestone or chalk. The primary active component is calcium carbonate...
industry developed here in the 19th century. 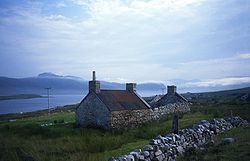 Around the shores of the loch are the small villages of Eriboll
Eriboll
Eriboll is a village in Sutherland, Scotland on the south eastern shore of the sea loch, Loch Eriboll. It lies in the northern part of the former county of Sutherland....
, Heilam, Polla, Portnancon and Rispond.

Eilean Hoan
Eilean Hoan
Eilean Hoan is an island in Loch Eriboll in Sutherland on the north coast of Scotland. It is about in extent and the highest point is above sea level. Its name is of Gaelic and Old Norse derivation and means "haven island"....
is located at the northern, seaward end of the loch and there are various small islets in the vicinity including A' Ghoil-sgeir, An Cruachan, An Dubh-sgeir, Eilean Clùimhrig, and Pocan Smoo. Today it is a largely unspoilt wilderness, in a region of high rainfall and with the lowest population density in the UK.

The Royal Navy
Royal Navy
The Royal Navy is the naval warfare service branch of the British Armed Forces. Founded in the 16th century, it is the oldest service branch and is known as the Senior Service...
have been frequent visitors to the loch, particularly during World War II
World War II
World War II, or the Second World War , was a global conflict lasting from 1939 to 1945, involving most of the world's nations—including all of the great powers—eventually forming two opposing military alliances: the Allies and the Axis...
. Portnancon
Portnancon
Portnancon is a small remote crofting township, and former, now disused fishing station, on the west shore of the sea loch, Loch Eriboll in Sutherland, Scottish Highlands and is in the Scottish council area of Highland. The village of Durness lies 8 miles along the A838 road to the west...
, on the western shore of Loch Eriboll, was where the company of the HMS Hood
HMS Hood (51)
HMS Hood was the last battlecruiser built for the Royal Navy. One of four s ordered in mid-1916, her design—although drastically revised after the Battle of Jutland and improved while she was under construction—still had serious limitations. For this reason she was the only ship of her class to be...
spent their last shore leave prior to the Battle of the Denmark Strait
Battle of the Denmark Strait
The Battle of the Denmark Strait was a Second World War naval battle between ships of the Royal Navy and the German Kriegsmarine, fought on 24 May 1941...
, and there are stones arranged by sailors into the names of their warships (including Hood and Amethyst) on the hillside above the hamlet of Laid. It was nicknamed "Lock ’orrible" by the British
United Kingdom
The United Kingdom of Great Britain and Northern IrelandIn the United Kingdom and Dependencies, other languages have been officially recognised as legitimate autochthonous languages under the European Charter for Regional or Minority Languages...
servicemen stationed here during the war because of the often inclement weather. The largest island in the loch, Eilean Choraidh
Eilean Choraidh
Eilean Choraidh, also known as Horse Island is an island in Loch Eriboll in Sutherland on the north coast of Scotland. It is about in extent and the highest point is above sea level....
, was used as a representation of the German battleship
Battleship
A battleship is a large armored warship with a main battery consisting of heavy caliber guns. Battleships were larger, better armed and armored than cruisers and destroyers. As the largest armed ships in a fleet, battleships were used to attain command of the sea and represented the apex of a...
Tirpitz
German battleship Tirpitz
Tirpitz was the second of two s built for the German Kriegsmarine during World War II. Named after Grand Admiral Alfred von Tirpitz, the architect of the Imperial Navy, the ship was laid down at the Kriegsmarinewerft in Wilhelmshaven in November 1936 and launched two and a half years later in April...
for aerial bombing practice by the Fleet Air Arm
Fleet Air Arm
The Fleet Air Arm is the branch of the British Royal Navy responsible for the operation of naval aircraft. The Fleet Air Arm currently operates the AgustaWestland Merlin, Westland Sea King and Westland Lynx helicopters...
prior to the successful Operation Tungsten
Operation Tungsten
Operation Tungsten was a British naval operation during World War II. it was one of a number of aerial attacks on the German battleship Tirpitz while she was in Norwegian waters...
in April 1944. The surviving 33 German U-boats, for example U-532 and U-295, formally surrendered here in 1945, ending the Battle of the Atlantic
Battle of the Atlantic
Battle of the Atlantic may refer to either of two naval campaigns:* The Atlantic U-boat Campaign during the First World War * The Battle of the Atlantic during the Second World War...
.

A leased area of the shore and loch is classified as a Minor training area by the Defence Training Estate, generally being used for amphibious and specialist training for three fortnights per year.

In 2011 the loch hosted Exercise Joint Warrior, the largest war games staged in the UK, involving the navy's new flagship, the assault ship HMS Bulwark
HMS Bulwark (L15)
HMS Bulwark is an , the UK's newest class of amphibious assault warship and built in Barrow-in-Furness, Cumbria. For numerous reasons, delays caused the delivery date to be put back, with the ship entering service in December 2004. Together with Albion, Ocean, and other amphibious ships, she...
.