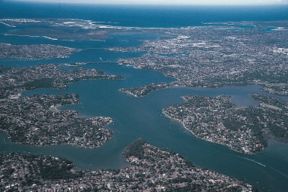 A ria is a coastal inlet formed by the partial submergence of an unglaciated river valley
River Valley
River Valley is the name of an urban planning area within the Central Area, Singapore's central business district.The River Valley Planning Area is defined by the region bounded by Orchard Boulevard, Devonshire Road and Eber Road to the north, Oxley Rise and Mohamed Sultan Road to the east, Martin...
. It is a drowned river valley that remains open to the sea. Typically, rias have a dendritic
Dendrite (mathematics)
In topology, a locally connected dendroid is called a dendrite. Equivalently a dendrite is a locally connected continuum that contains no simple closed curves....
, treelike outline although they can be straight and without significant branches. This pattern is inherited from the dendritic drainage pattern of the flooded river valley. The drowning of river valleys along a stretch of coast and formation of rias results in an extremely irregular and indented coastline. Often, there are islands, which are summits of partially submerged, pre-existing hill peaks. A ria coast is a coastline having several parallel rias separated by prominent ridges, extending a distance inland. The sea level change that caused the submergence of a river valley may be either eustatic (where global sea levels rise), or isostatic
Isostasy
Isostasy is a term used in geology to refer to the state of gravitational equilibrium between the earth's lithosphere and asthenosphere such that the tectonic plates "float" at an elevation which depends on their thickness and density. This concept is invoked to explain how different topographic...
(where the local land sinks). The result is often a very large estuary at the mouth of a relatively insignificant river (or else sediments would quickly fill the ria). The Kingsbridge Estuary
Kingsbridge Estuary
The Kingsbridge Estuary is located in the South Hams area of Devon, England, running from Kingsbridge in the north to its mouth at the English Channel near Salcombe...
in Devon
Devon
Devon is a large county in southwestern England. The county is sometimes referred to as Devonshire, although the term is rarely used inside the county itself as the county has never been officially "shired", it often indicates a traditional or historical context.The county shares borders with...
, England is an extreme example of a ria forming an estuary disproportionate to the size of its river; no significant river flows into it at all, only a number of small streams. 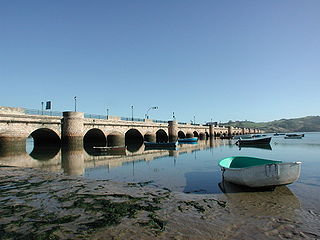