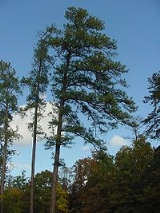 Encyclopedia
Pinus taeda is one of several pine
Pine
Pines are trees in the genus Pinus ,in the family Pinaceae. They make up the monotypic subfamily Pinoideae. There are about 115 species of pine, although different authorities accept between 105 and 125 species.-Etymology:...
s native to the Southeastern United States
Southeastern United States
The Southeastern United States, colloquially referred to as the Southeast, is the eastern portion of the Southern United States. It is one of the most populous regions in the United States of America....
, from central Texas
Texas
Texas is the second largest U.S. state by both area and population, and the largest state by area in the contiguous United States.The name, based on the Caddo word "Tejas" meaning "friends" or "allies", was applied by the Spanish to the Caddo themselves and to the region of their settlement in...
east to Florida
Florida
Florida is a state in the southeastern United States, located on the nation's Atlantic and Gulf coasts. It is bordered to the west by the Gulf of Mexico, to the north by Alabama and Georgia and to the east by the Atlantic Ocean. With a population of 18,801,310 as measured by the 2010 census, it...
, and north to Delaware
Delaware
Delaware is a U.S. state located on the Atlantic Coast in the Mid-Atlantic region of the United States. It is bordered to the south and west by Maryland, and to the north by Pennsylvania...
. It is particularly dominant in the eastern half of North Carolina
North Carolina
North Carolina is a state located in the southeastern United States. The state borders South Carolina and Georgia to the south, Tennessee to the west and Virginia to the north. North Carolina contains 100 counties. Its capital is Raleigh, and its largest city is Charlotte...
, where there are huge expanses consisting solely of Loblolly Pine trees. In the rest of the South
Southern United States
The Southern United States—commonly referred to as the American South, Dixie, or simply the South—constitutes a large distinctive area in the southeastern and south-central United States...
, forests often contain Loblolly Pines along with many other species of trees. The wood industry classifies the species as a southern yellow pine
Southern Yellow Pine
Southern Yellow Pine doesn't refer to any one species of tree, but rather a group of species which are classified as yellow pine , and are native to the Southern United States. They grow very well in the acidic red clay soil found in most of the region. The varieties include Loblolly, Longleaf,...
. 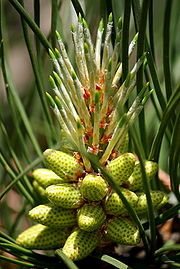 The tree
Tree
A tree is a perennial woody plant. It is most often defined as a woody plant that has many secondary branches supported clear of the ground on a single main stem or trunk with clear apical dominance. A minimum height specification at maturity is cited by some authors, varying from 3 m to...
s reach a height of 30–35 m (98.4–114.8 ft) with a diameter of 0.4–1.5 m (1.3–4.9 ft). Exceptional specimens may reach 50 m (164 ft) tall, the largest of the southern pines. Its needles are in bundles of three, sometimes twisted, and measure 12–22 cm (4.7–8.7 in) long; an intermediate length for southern pines, shorter than those of the Longleaf Pine
Longleaf Pine
Pinus palustris, commonly known as the Longleaf Pine, is a pine native to the southeastern United States, found along the coastal plain from eastern Texas to southeast Virginia extending into northern and central Florida....
or Slash Pine
Slash Pine
Pinus elliottii, commonly known as the Slash Pine, is a pine native to the southeastern United States, from southern South Carolina west to southeastern Louisiana, and south to the Florida Keys....
, but longer than those of the Shortleaf Pine and Spruce Pine
Spruce Pine
Pinus glabra is a tree found on the coastal plains of the southern United States, from southern South Carolina south to northern Florida and west to southern Louisiana...
. The needles usually last up to two years before they fall, which gives the species its evergreen character. Although some needles fall throughout the year due to severe weather, insect damage, and drought, most needles fall during the autumn and winter of their second year. The seed cones
Conifer cone
A cone is an organ on plants in the division Pinophyta that contains the reproductive structures. The familiar woody cone is the female cone, which produces seeds. The male cones, which produce pollen, are usually herbaceous and much less conspicuous even at full maturity...
are green, ripening pale buff-brown, 7–13 cm (2.8–5.1 in) in length, 2–3 cm (0.78740157480315–1.2 in) broad when closed, opening to 4–6 cm (1.6–2.4 in) wide, each scale bearing a sharp 3–6 mm spine.

The word loblolly means "low, wet place", but these trees are not limited to that specific habitat. Loblolly Pines grow well in acidic clay soil, which is common throughout the South, and are thus often found in large stands in rural places. Other old names, now rarely used, include oldfield pine, due to its status as an early colonizer
Ruderal species
A ruderal species is a plant species that is first to colonize disturbed lands. The disturbance may be natural , or due to human influence – constructional , or agricultural .Ruderal species typically dominate the disturbed area...
of abandoned fields; bull pine, due to its size (several other yellow pines are also often so named, especially large isolated specimens); rosemary pine, due to loblolly's distinctive fragrance compared to the other southern pines; and North Carolina pine. For the scientific name, Pinus is the Latin name for the pines and taeda refers to the resinous wood.

With the advent of wildfire suppression, Loblolly Pine has come to prevalence in some parts of the Deep South that were once populated with greater numbers of Longleaf Pine and, especially in northern Florida
Florida
Florida is a state in the southeastern United States, located on the nation's Atlantic and Gulf coasts. It is bordered to the west by the Gulf of Mexico, to the north by Alabama and Georgia and to the east by the Atlantic Ocean. With a population of 18,801,310 as measured by the 2010 census, it...
, Slash Pine.

The rate of growth is rapid, even among the generally fast-growing southern pines. The yellowish, resin
Resin
Resin in the most specific use of the term is a hydrocarbon secretion of many plants, particularly coniferous trees. Resins are valued for their chemical properties and associated uses, such as the production of varnishes, adhesives, and food glazing agents; as an important source of raw materials...
ous wood is highly prized for lumber, but is also used for wood pulp
Wood pulp
Pulp is a lignocellulosic fibrous material prepared by chemically or mechanically separating cellulose fibres from wood, fibre crops or waste paper. Wood pulp is the most common raw material in papermaking.-History:...
. This tree is commercially grown in extensive plantations, along with Slash Pine
Slash Pine
Pinus elliottii, commonly known as the Slash Pine, is a pine native to the southeastern United States, from southern South Carolina west to southeastern Louisiana, and south to the Florida Keys....
.

Loblolly Pine is the pine of the Lost Pines Forest
Lost Pines Forest
The Lost Pines Forest is a belt of loblolly pines near Bastrop in Central Texas. The stand of pines is unique in Texas because it is a disjunct population of trees that is more than separated from, and yet closely genetically related to, the vast expanse of pine trees of the East Texas Piney...
around Bastrop, Texas
Bastrop, Texas
-Demographics:As of the census of 2000, there are 5340 people in Bastrop, organized into 2034 households and 1336 families. The population density is 734.8 people per square mile . There are 2,239 housing units at an average density of 308.1 per square mile...
, and in McKinney Roughs along the Texas Colorado River
Colorado River (Texas)
The Colorado River is a river that runs through the U.S. state of Texas; it should not be confused with the much longer Colorado River which flows from Colorado into the Gulf of California....
. These are isolated populations
Disjunct distribution
In biology, a taxon with a disjunct distribution is one that has two or more groups that are related but widely separated from each other geographically...
on areas of acid
Acid
An acid is a substance which reacts with a base. Commonly, acids can be identified as tasting sour, reacting with metals such as calcium, and bases like sodium carbonate. Aqueous acids have a pH of less than 7, where an acid of lower pH is typically stronger, and turn blue litmus paper red...
ic sand
Sand
Sand is a naturally occurring granular material composed of finely divided rock and mineral particles.The composition of sand is highly variable, depending on the local rock sources and conditions, but the most common constituent of sand in inland continental settings and non-tropical coastal...
y soil, surrounded by alkali
Alkali
In chemistry, an alkali is a basic, ionic salt of an alkali metal or alkaline earth metal element. Some authors also define an alkali as a base that dissolves in water. A solution of a soluble base has a pH greater than 7. The adjective alkaline is commonly used in English as a synonym for base,...
ne clay
Clay
Clay is a general term including many combinations of one or more clay minerals with traces of metal oxides and organic matter. Geologic clay deposits are mostly composed of phyllosilicate minerals containing variable amounts of water trapped in the mineral structure.- Formation :Clay minerals...
s that are poor for pine growth.

The University of Arkansas at Fort Smith is home to the "City Champion," winner of the City of Fort Smith TreeQuest 2004. This beautiful Loblolly Pine is located in a row of trees set to be demolished to make way for an expansion to the campus library. The two rows of loblolly pines were originally planted by Dr. Hattie May Butterfield in the 1950s as a symbolic wall to separate the vocational programs and the liberal arts faculty, between whom there was a rift.
The source of this article is wikipedia, the free encyclopedia.  The text of this article is licensed under the GFDL.