Encyclopedia
Congaree National Park preserves the largest tract of old growth bottomland hardwood forest
Bottomland hardwood forest
The Bottomland hardwood forest is a type of deciduous hardwood forest found in broad lowland floodplains along large rivers and lakes. They are occasionally flooded, which builds up the alluvial soils required for the Gum, Oak and Bald Cypress trees that typically grow in this type of biome...
left in the United States
United States
The United States of America is a federal constitutional republic comprising fifty states and a federal district...
. Located in South Carolina
South Carolina
South Carolina is a state in the Deep South of the United States that borders Georgia to the south, North Carolina to the north, and the Atlantic Ocean to the east. Originally part of the Province of Carolina, the Province of South Carolina was one of the 13 colonies that declared independence...
, the 26,546-acre (89 km2) national park
National park
A national park is a reserve of natural, semi-natural, or developed land that a sovereign state declares or owns. Although individual nations designate their own national parks differently A national park is a reserve of natural, semi-natural, or developed land that a sovereign state declares or...
received that designation in 2003 as the culmination of a grassroots campaign which had started in 1969. The lush trees growing in this floodplain forest are some of the tallest in the Eastern U.S., forming one of the highest temperate deciduous forest canopies remaining in the world. The Congaree River
Congaree River
The Congaree River is a short but wide river in South Carolina in the United States; It flows for only 47 miles . The river serves an important role as the final outlet channel for the entire Lower Saluda and Lower Broad watersheds, before merging with the Wateree River just north of Lake Marion to...
flows through the park. 15,000 acres (60.70 km2) or about 57 percent of the park is designated wilderness area.

In 1969, the Sierra Club
Sierra Club
The Sierra Club is the oldest, largest, and most influential grassroots environmental organization in the United States. It was founded on May 28, 1892, in San Francisco, California, by the conservationist and preservationist John Muir, who became its first president...
launched a grassroots campaign to save this area of old growth forest from private landowners interested in relatively high timber prices. The result of this campaign was the establishment by Congress of Congaree Swamp National Monument
U.S. National Monument
A National Monument in the United States is a protected area that is similar to a National Park except that the President of the United States can quickly declare an area of the United States to be a National Monument without the approval of Congress. National monuments receive less funding and...
on October 18, 1976. The national monument became an International Biosphere Reserve on June 30, 1983. Over two-thirds of the national monument was designated a wilderness area
National Wilderness Preservation System
The National Wilderness Preservation System of the United States protects federally managed land areas designated for preservation in their natural condition. It was established by the Wilderness Act upon the signature of President Lyndon B. Johnson on September 3, 1964...
on October 24, 1988, and it became an Important Bird Area
Important Bird Area
An Important Bird Area is an area recognized as being globally important habitat for the conservation of bird populations. Currently there are about 10,000 IBAs worldwide. The program was developed and sites are identified by BirdLife International...
on July 26, 2001. Congress redesignated the monument Congaree National Park on November 10, 2003 and simultaneously expanded its authorized boundary by approximately 4576 acres (18.5 km²). As of August 2011, approximately 26020 acres (105.3 km²) of the park are in Federal ownership.

In addition to being a designated Wilderness Area, an International Biosphere Reserve, a Globally Important Bird Area and a National Natural Landmark, Congaree National Park features primitive campsites and offers hiking
Hiking
Hiking is an outdoor activity which consists of walking in natural environments, often in mountainous or other scenic terrain. People often hike on hiking trails. It is such a popular activity that there are numerous hiking organizations worldwide. The health benefits of different types of hiking...
, canoeing
Canoeing
Canoeing is an outdoor activity that involves a special kind of canoe.Open canoes may be 'poled' , sailed, 'lined and tracked' or even 'gunnel-bobbed'....
, kayaking, and bird watching. Bald cypress is a common tree in the park. Large animals possibly seen in the park include bobcat
Bobcat
The bobcat is a North American mammal of the cat family Felidae, appearing during the Irvingtonian stage of around 1.8 million years ago . With twelve recognized subspecies, it ranges from southern Canada to northern Mexico, including most of the continental United States...
s, deer
Deer
Deer are the ruminant mammals forming the family Cervidae. Species in the Cervidae family include white-tailed deer, elk, moose, red deer, reindeer, fallow deer, roe deer and chital. Male deer of all species and female reindeer grow and shed new antlers each year...
, feral pigs, feral dogs, coyote
Coyote
The coyote , also known as the American jackal or the prairie wolf, is a species of canine found throughout North and Central America, ranging from Panama in the south, north through Mexico, the United States and Canada...
s, and turkeys
Turkey (bird)
A turkey is a large bird in the genus Meleagris. One species, Meleagris gallopavo, commonly known as the Wild Turkey, is native to the forests of North America. The domestic turkey is a descendant of this species...
. Its waters contain interesting creatures like amphibian
Amphibian
Amphibians , are a class of vertebrate animals including animals such as toads, frogs, caecilians, and salamanders. They are characterized as non-amniote ectothermic tetrapods...
s, turtle
Turtle
Turtles are reptiles of the order Testudines , characterised by a special bony or cartilaginous shell developed from their ribs that acts as a shield...
s, snake
Snake
Snakes are elongate, legless, carnivorous reptiles of the suborder Serpentes that can be distinguished from legless lizards by their lack of eyelids and external ears. Like all squamates, snakes are ectothermic, amniote vertebrates covered in overlapping scales...
s, alligator
Alligator
An alligator is a crocodilian in the genus Alligator of the family Alligatoridae. There are two extant alligator species: the American alligator and the Chinese alligator ....
s, and many types of fish, including bowfin
Bowfin
The Bowfin, Amia calva, is the last surviving member of the order Amiiformes , and of the family Amiidae...
, largemouth bass
Largemouth bass
The largemouth bass is a species of black bass in the sunfish family native to North America . It is also known as widemouth bass, bigmouth, black bass, bucketmouth, Potter's fish, Florida bass, Florida largemouth, green bass, green trout, linesides, Oswego bass, southern largemouth...
, panfish
Panfish
A panfish, also spelled pan-fish or pan fish, is an edible game fish that usually doesn't outgrow the size of a frying pan. The term is also commonly used by anglers to refer to any small catch that will fit in a pan, but is large enough to be legal. However its definition and usage varies with...
, and catfish
Catfish
Catfishes are a diverse group of ray-finned fish. Named for their prominent barbels, which resemble a cat's whiskers, catfish range in size and behavior from the heaviest and longest, the Mekong giant catfish from Southeast Asia and the second longest, the wels catfish of Eurasia, to detritivores...
. Primitive and backcountry camping is available. Some of the hiking trails include the Bluff Trail (0.7 mi), Weston Lake Loop Trail (4.6 mi), Oakridge Trail (7.5 mi), and King Snake Trail (11.1 mi) where hikers may spot deer, raccoon
Raccoon
Procyon is a genus of nocturnal mammals, comprising three species commonly known as raccoons, in the family Procyonidae. The most familiar species, the common raccoon , is often known simply as "the" raccoon, as the two other raccoon species in the genus are native only to the tropics and are...
, opossum, and even bobcat tracks. The National Park Service
National Park Service
The National Park Service is the U.S. federal agency that manages all national parks, many national monuments, and other conservation and historical properties with various title designations...
rangers have current trail conditions which can be found in the Harry Hampton Visitor’s Center. Along with hiking trails, the park also has a 20 miles (32.2 km) marked canoe trail on Cedar Creek. 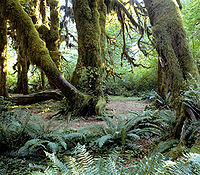 Most visitors to the park walk along the Boardwalk Loop, an elevated 2.4 miles (3.9 km) walkway through the swampy environment that protects delicate fungi and plant life at ground level. Canoe rides through the swamp are conducted for free every Saturday and Sunday. Congaree boasts both the tallest (169ft, 51.4m) and largest (42 cubic meters) Loblolly Pines (Pinus taeda) alive today.

The Harry Hampton Visitor Center features exhibits about the natural history of the park, and the efforts to protect the swamp.