List of kings of the Angles
Topic Home
Discussion
0 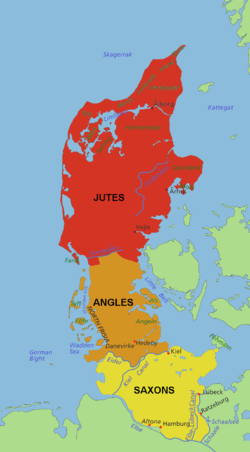 The Angles
Angles
The Angles is a modern English term for a Germanic people who took their name from the ancestral cultural region of Angeln, a district located in Schleswig-Holstein, Germany...
were a dominant Germanic
Germanic peoples
The Germanic peoples are an Indo-European ethno-linguistic group of Northern European origin, identified by their use of the Indo-European Germanic languages which diversified out of Proto-Germanic during the Pre-Roman Iron Age.Originating about 1800 BCE from the Corded Ware Culture on the North...
tribe in the Anglo-Saxon
Anglo-Saxons
Anglo-Saxon is a term used by historians to designate the Germanic tribes who invaded and settled the south and east of Great Britain beginning in the early 5th century AD, and the period from their creation of the English nation to the Norman conquest. The Anglo-Saxon Era denotes the period of...
settlement of Britain
Sub-Roman Britain
Sub-Roman Britain is a term derived from an archaeological label for the material culture of Britain in Late Antiquity: the term "Sub-Roman" was invented to describe the potsherds in sites of the 5th century and the 6th century, initially with an implication of decay of locally-made wares from a...
, and gave their name to the English
English people
The English are a nation and ethnic group native to England, who speak English. The English identity is of early mediaeval origin, when they were known in Old English as the Anglecynn. England is now a country of the United Kingdom, and the majority of English people in England are British Citizens...
, England
England
England is a country that is part of the United Kingdom. It shares land borders with Scotland to the north and Wales to the west; the Irish Sea is to the north west, the Celtic Sea to the south west, with the North Sea to the east and the English Channel to the south separating it from continental...
and to the region of East Anglia
East Anglia
East Anglia is a traditional name for a region of eastern England, named after an ancient Anglo-Saxon kingdom, the Kingdom of the East Angles. The Angles took their name from their homeland Angeln, in northern Germany. East Anglia initially consisted of Norfolk and Suffolk, but upon the marriage of...
. Originally from Angeln
Angeln
Modern Angeln, also known as Anglia , is a small peninsula in Southern Schleswig in the northern Schleswig-Holstein, Germany, protruding into the Bay of Kiel...
in Schleswig-Holstein
Schleswig-Holstein
Schleswig-Holstein is the northernmost of the sixteen states of Germany, comprising most of the historical duchy of Holstein and the southern part of the former Duchy of Schleswig...
, a legendary list of their kings has been preserved in the heroic poems Widsith
Widsith
Widsith is an Old English poem of 144 lines that appears to date from the 9th century, drawing on earlier oral traditions of Anglo-Saxon tale singing. The only text of the fragment is copied in the Exeter Book, a manuscript of Old English poetry compiled in the late 10th century containing...
and Beowulf
Beowulf
Beowulf , but modern scholars agree in naming it after the hero whose life is its subject." of an Old English heroic epic poem consisting of 3182 alliterative long lines, set in Scandinavia, commonly cited as one of the most important works of Anglo-Saxon literature.It survives in a single...
, and the Anglo-Saxon Chronicle
Anglo-Saxon Chronicle
The Anglo-Saxon Chronicle is a collection of annals in Old English chronicling the history of the Anglo-Saxons. The original manuscript of the Chronicle was created late in the 9th century, probably in Wessex, during the reign of Alfred the Great...
.

According to Anglo-Saxon legends recounted in Widsith and other sources such as Æthelweard (Chronicon), their earliest named ancestor was a culture-hero named Sceaf, who was washed ashore as a child in an empty boat, bearing a sheaf of corn. This is said to have occurred on an island named Scani or Scandza
Scandza
Scandza was the name given to Scandinavia by the Roman historian Jordanes in his work Getica, written while in Constantinople around AD 551. He described the area to set the stage for his treatment of the Goths' migration from southern Sweden to Gothiscandza...
(Scania
Scania
Scania is the southernmost of the 25 traditional non-administrative provinces of Sweden, constituting a peninsula on the southern tip of the Scandinavian peninsula, and some adjacent islands. The modern administrative subdivision Skåne County is almost, but not totally, congruent with the...
), and according to William of Malmesbury
William of Malmesbury
William of Malmesbury was the foremost English historian of the 12th century. C. Warren Hollister so ranks him among the most talented generation of writers of history since Bede, "a gifted historical scholar and an omnivorous reader, impressively well versed in the literature of classical,...
(Gesta regum Anglorum) he was later chosen as King of the Angles, reigning from Schleswig. His descendants became known as Scefings, or more usually Scylding
Scylding
Old English Scylding and Old Norse Skjöldung , meaning in both languages "People of Scyld/Skjöld" refers to members of a legendary royal family of Danes and sometimes to their people. The name is explained in many text by the descent of this family from an eponymous king Scyld/Skjöld...
s (after Sceldwea
Scyld
Scyld Scefing is the legendary ancestor of the Danish royal lineage known as the Scyldings. He is the counterpart of the Skioldus or Skjöldr of Danish and Icelandic sources....
, see list below). Counting up the generations appears to place Sceaf around 100 BC
100 BC
Year 100 BC was a year of the pre-Julian Roman calendar. At the time it was known as the Year of the Consulship of Marius and Flaccus...
, at the time that Schleswig-Holstein had recently become depopulated following the migrations of the Teutons, with the boat motif recalling the events of the Cimbrian Flood, although the legendary nature of the pedigree makes such chronological extrapolations dubious (some early writers apparently confused the Cimbrian Flood with the Great Flood, making Sceaf a son of Noah
Noah
Noah was, according to the Hebrew Bible, the tenth and last of the antediluvian Patriarchs. The biblical story of Noah is contained in chapters 6–9 of the book of Genesis, where he saves his family and representatives of all animals from the flood by constructing an ark...
). An alternative scenario places the appearance of Sceaf, and the Cimbrian Flood itself, in 307
307 BC
Year 307 BC was a year of the pre-Julian Roman calendar. At the time, it was known as the Year of the Consulship of Caecus and Violens...
–306 BC
306 BC
Year 306 BC was a year of the pre-Julian Roman calendar. At the time, it was known as the Year of the Consulship of Tremulus and Arvina...
. Prior to this the Angles had inhabited both Schleswig-Holstein and the entire Jutland peninsula, whereas the Jutes had lived further to the east along the Baltic coast. In the disruption following the flood the Jutes migrated to Jutland, naming it after themselves and confining the Angles to Schleswig-Holstein alone. On this chronology King Teotobod is identified with Heremod
Heremod
Heremod is a legendary Danish king and a legendary king of the Angles who would have lived in the 2nd century and known through a short account of his exile in the Old English poem Beowulf and from appearances in some genealogies as the father of Scyld...
, father of Sceldwea, who is said to have allied himself with the Jutes (Cimbri), and was later murdered. The following list gives the supposed succession from father to son. Most of these rulers are also mentioned by Snorri Sturluson
Snorri Sturluson
Snorri Sturluson was an Icelandic historian, poet, and politician. He was twice elected lawspeaker at the Icelandic parliament, the Althing...
(Prose Edda
Prose Edda
The Prose Edda, also known as the Younger Edda, Snorri's Edda or simply Edda, is an Icelandic collection of four sections interspersed with excerpts from earlier skaldic and Eddic poetry containing tales from Nordic mythology...
) in their Norse
North Germanic languages
The North Germanic languages or Scandinavian languages, the languages of Scandinavians, make up one of the three branches of the Germanic languages, a sub-family of the Indo-European languages, along with the West Germanic languages and the extinct East Germanic languages...
forms, and he also gives seven names preceding Sceaf, beginning with the god Thor
Thor
In Norse mythology, Thor is a hammer-wielding god associated with thunder, lightning, storms, oak trees, strength, the protection of mankind, and also hallowing, healing, and fertility...
, that are not found in Anglo-Saxon genealogies.

Dynasty of Thor (according to the Prose Edda) 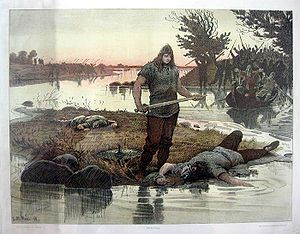 
In the mid 5th century, under pressure from Attila and the Huns
Huns
The Huns were a group of nomadic people who, appearing from east of the Volga River, migrated into Europe c. AD 370 and established the vast Hunnic Empire there. Since de Guignes linked them with the Xiongnu, who had been northern neighbours of China 300 years prior to the emergence of the Huns,...
, the Angles began migrating to Britain
Sub-Roman Britain
Sub-Roman Britain is a term derived from an archaeological label for the material culture of Britain in Late Antiquity: the term "Sub-Roman" was invented to describe the potsherds in sites of the 5th century and the 6th century, initially with an implication of decay of locally-made wares from a...
– a movement that later became so great, in fact, that Angeln was subsequently described by Bede
Bede
Bede , also referred to as Saint Bede or the Venerable Bede , was a monk at the Northumbrian monastery of Saint Peter at Monkwearmouth, today part of Sunderland, England, and of its companion monastery, Saint Paul's, in modern Jarrow , both in the Kingdom of Northumbria...
(Historia ecclesiastica gentis Anglorum
Historia ecclesiastica gentis Anglorum
The Historia ecclesiastica gentis Anglorum is a work in Latin by Bede on the history of the Christian Churches in England, and of England generally; its main focus is on the conflict between Roman and Celtic Christianity.It is considered to be one of the most important original references on...
) as empty of people. Around 527
527
Year 527 was a common year starting on Friday of the Julian calendar. At the time, it was known as the Year of the Consulship of Mavortius without colleague...
(or perhaps 515
515
Year 515 was a common year starting on Thursday of the Julian calendar. At the time, it was known as the Year of the Consulship of Florentius and Anthemius...
) Icel, son of Eomer
Eomer
Eomer , also spelt Eomær, was the great-great-grandfather of Creoda, the first King of Mercia. He is considered the ancestor to the Kings of Mercia. Eomer himself was the son of Angeltheow...
, left his ancestral homelands and founded what became the Kingdom of Mercia
Mercia
Mercia was one of the kingdoms of the Anglo-Saxon Heptarchy. It was centred on the valley of the River Trent and its tributaries in the region now known as the English Midlands...
in England
England
England is a country that is part of the United Kingdom. It shares land borders with Scotland to the north and Wales to the west; the Irish Sea is to the north west, the Celtic Sea to the south west, with the North Sea to the east and the English Channel to the south separating it from continental...
(for his successors there see List of monarchs of Mercia).
The source of this article is wikipedia, the free encyclopedia.  The text of this article is licensed under the GFDL.