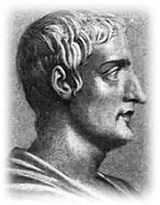 Other writings by him discuss oratory
Oratory
Oratory is a type of public speaking.Oratory may also refer to:* Oratory , a power metal band* Oratory , a place of worship* a religious order such as** Oratory of Saint Philip Neri ** Oratory of Jesus...
(in dialogue
Dialogue
Dialogue is a literary and theatrical form consisting of a written or spoken conversational exchange between two or more people....
format, see Dialogus de oratoribus
Dialogus de oratoribus
The Dialogus de oratoribus is a short work attributed to Tacitus, in dialogue form, on the art of rhetoric. Its date of composition is unknown, though its dedication to Fabius Iustus places its publication around 102 AD....
), Germania
Germania
Germania was the Greek and Roman geographical term for the geographical regions inhabited by mainly by peoples considered to be Germani. It was most often used to refer especially to the east of the Rhine and north of the Danube...
(in De origine et situ Germanorum
Germania (book)
The Germania , written by Gaius Cornelius Tacitus around 98, is an ethnographic work on the Germanic tribes outside the Roman Empire.-Contents:...
), and the life of his father-in-law Agricola
Gnaeus Julius Agricola
Gnaeus Julius Agricola was a Roman general responsible for much of the Roman conquest of Britain. His biography, the De vita et moribus Iulii Agricolae, was the first published work of his son-in-law, the historian Tacitus, and is the source for most of what is known about him.Born to a noted...
, mainly focusing on his campaign in Britannia
Britannia
Britannia is an ancient term for Great Britain, and also a female personification of the island. The name is Latin, and derives from the Greek form Prettanike or Brettaniai, which originally designated a collection of islands with individual names, including Albion or Great Britain. However, by the...
(see De vita et moribus Iulii Agricolae).

Tacitus is considered to be one of the greatest Roman historians.

Translation: Think of your forefathers and posterity.

Translation: However the marriage is there severe.

It is the rare fortune of these days that one may think what one likes and say what one thinks.

Once killing starts, it is difficult to draw the line.

The desire for glory clings even to the best men longer than any other passion.

Translation: The gods are on the side of the stronger.
More
x