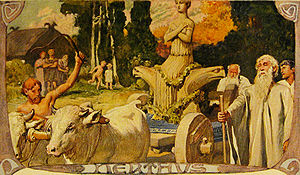 In Germanic paganism
Germanic paganism
Germanic paganism refers to the theology and religious practices of the Germanic peoples of north-western Europe from the Iron Age until their Christianization during the Medieval period...
, Nerthus is a goddess
Goddess
A goddess is a female deity. In some cultures goddesses are associated with Earth, motherhood, love, and the household. In other cultures, goddesses also rule over war, death, and destruction as well as healing....
associated with fertility
Fertility goddess
A fertility deity is a god or goddess in mythology associated with fertility, pregnancy, and birth. In some cases these deities are directly associated with sex, and in others they simply embody related attributes...
. Nerthus is attested by Tacitus
Tacitus
Publius Cornelius Tacitus was a senator and a historian of the Roman Empire. The surviving portions of his two major works—the Annals and the Histories—examine the reigns of the Roman Emperors Tiberius, Claudius, Nero and those who reigned in the Year of the Four Emperors...
, the first century AD Roman historian, in his Germania
Germania (book)
The Germania , written by Gaius Cornelius Tacitus around 98, is an ethnographic work on the Germanic tribes outside the Roman Empire.-Contents:...
. Various theories exist regarding the goddess and her potential later traces amongst the Germanic tribes. The minor planet
Minor planet
An asteroid group or minor-planet group is a population of minor planets that have a share broadly similar orbits. Members are generally unrelated to each other, unlike in an asteroid family, which often results from the break-up of a single asteroid...
601 Nerthus
601 Nerthus
-External links:*...
is named after Nerthus.

Nerthus is often identified with the Vanr
Vanir
In Norse mythology, the Vanir are a group of gods associated with fertility, wisdom and the ability to see the future. The Vanir are one of two groups of gods and are the namesake of the location Vanaheimr . After the Æsir–Vanir War, the Vanir became a subgroup of the Æsir...
Njörðr who is attested in various 13th century Old Norse
Old Norse
Old Norse is a North Germanic language that was spoken by inhabitants of Scandinavia and inhabitants of their overseas settlements during the Viking Age, until about 1300....
works and in numerous Scandinavia
Scandinavia
Scandinavia is a cultural, historical and ethno-linguistic region in northern Europe that includes the three kingdoms of Denmark, Norway and Sweden, characterized by their common ethno-cultural heritage and language. Modern Norway and Sweden proper are situated on the Scandinavian Peninsula,...
n place names
Toponymy
Toponymy is the scientific study of place names , their origins, meanings, use and typology. The word "toponymy" is derived from the Greek words tópos and ónoma . Toponymy is itself a branch of onomastics, the study of names of all kinds...
. The connection between the two is due to the linguistic relationship between Njörðr and the reconstructed
Linguistic reconstruction
Linguistic reconstruction is the practice of establishing the features of the unattested ancestor of one or more given languages. There are two kinds of reconstruction. Internal reconstruction uses irregularities in a single language to make inferences about an earlier stage of that language...
Proto-Germanic *Nerþuz, "Nerthus" being the feminine, Latin
Latin
Latin is an Italic language originally spoken in Latium and Ancient Rome. It, along with most European languages, is a descendant of the ancient Proto-Indo-European language. Although it is considered a dead language, a number of scholars and members of the Christian clergy speak it fluently, and...
ized form of what Njörðr would have looked like around 100 CE. This has led to theories about the relation of the two, including that Njörðr may have once been a hermaphroditic deity or, generally considered more likely, that the name may indicate an otherwise unattested divine brother and sister pair such as the Vanir deities Freyja and Freyr
Freyr
Freyr is one of the most important gods of Norse paganism. Freyr was highly associated with farming, weather and, as a phallic fertility god, Freyr "bestows peace and pleasure on mortals"...
. Connections have been proposed between the unnamed mother of Freyja and Freyr and the sister of Njörðr mentioned in Lokasenna and Nerthus.

A number of theories have been proposed regarding the figure of Nerthus, including the location of the events described, relations to other known deities and her role amongst the Germanic tribes.

It has been theorized that evidence of the veneration of a mother goddess
Mother goddess
Mother goddess is a term used to refer to a goddess who represents motherhood, fertility, creation or embodies the bounty of the Earth. When equated with the Earth or the natural world such goddesses are sometimes referred to as Mother Earth or as the Earth Mother.Many different goddesses have...
, representing the earth, survived among the Angles
Angles
The Angles is a modern English term for a Germanic people who took their name from the ancestral cultural region of Angeln, a district located in Schleswig-Holstein, Germany...
(Tacitus' Anglii) into Christian times as evidenced in the partially-Christianized pagan Anglo-Saxon Æcerbot
Æcerbot
Æcerbot is an Anglo-Saxon charm recorded in the 11th century, intended to remedy fields that yielded poorly. The charm consists of a partially Christianized prayer and a day-long ritual that began at night with four sods taken from the field, to the root-mats of which a poultice was applied in the...
ritual.

A number of scholars have proposed a potential location of Tacitus' account of Nerthus as on the island of Zealand in Denmark
Denmark
Denmark is a Scandinavian country in Northern Europe. The countries of Denmark and Greenland, as well as the Faroe Islands, constitute the Kingdom of Denmark . It is the southernmost of the Nordic countries, southwest of Sweden and south of Norway, and bordered to the south by Germany. Denmark...
. Reasoning behind this notion is the linking the name Nerthus with the medieval place name Niartharum (now called Naerum) located on Zealand. Further justification is given that Lejre
Lejre
Lejre is a town with a population of 2,343 and a municipality on the island of Zealand in east Denmark. It belongs to Region Sjælland. The town's Old Norse name was Hleiðra. The municipality has an area of 240 km² and a total population of ca. 26,603 . Its mayor is Mette Touborg, representing the...
, the seat of the ancient kings of Denmark, also is located on Zealand. Nerthus is then commonly compared to Gefjun who is said to have plowed the island of Zealand from Sweden in Gylfaginning.

Jacob Grimm (1835) first identified Nerthus as the Germanic earth-mother who appeared under such names as Erda
Jörð
In Norse mythology, Jörð and also called Jarð as in Old East Norse, is a female jötunn. She is the mother of Thor and Meili, and the personification of the Earth. Fjörgyn and Hlôdyn are considered to be other names for Jörð...
, Erce
Ercé
Ercé is a commune in the Ariège department in southwestern France.-Population:Inhabitants are called Ercéens.-References:*...
, Fru Gaue, Fjörgyn, Frau Holda and Hluodana.

Nerthus typically is identified as a Vanir goddess. Her wagon tour has been likened to several archeological wagon finds and legends of deities parading in wagons. Terry Gunnell and many others have noted various archaeological finds of ritual wagons in Denmark dating from 200 AD and the Bronze Age
Bronze Age
The Bronze Age is a period characterized by the use of copper and its alloy bronze as the chief hard materials in the manufacture of some implements and weapons. Chronologically, it stands between the Stone Age and Iron Age...
. Such a ceremonial wagon, incapable of making turns, was discovered in the Oseberg ship find. Two of the most famous literary examples occur in the Icelandic family sagas. The Vanir
Vanir
In Norse mythology, the Vanir are a group of gods associated with fertility, wisdom and the ability to see the future. The Vanir are one of two groups of gods and are the namesake of the location Vanaheimr . After the Æsir–Vanir War, the Vanir became a subgroup of the Æsir...
god Freyr
Freyr
Freyr is one of the most important gods of Norse paganism. Freyr was highly associated with farming, weather and, as a phallic fertility god, Freyr "bestows peace and pleasure on mortals"...
is said to ride in a wagon annually through the country accompanied by a priestess to bless the fields, according to a late story titled Hauks þáttr hábrókar in the 14th century Flateyjarbók
Flateyjarbók
The Flatey Book, is an important medieval Icelandic manuscript. It is also known as GkS 1005 fol. and by the Latin name Codex Flateyensis.- Description :...
manuscript. In the same source, King Eric of Sweden is said to consult a god named Lytir
Lytir
Lytir is considered a god in Norse mythology and Norse paganism. His name is either related to the Old Norse word hlutr, meaning "lot, share, foretell" or lýti meaning blemish. If the former meaning is assumed, then priests of Lytir would probably have been spámaðar or fortune-tellers...
, whose wagon was brought to his hall in order to perform a divination ceremony.

H.E. Davidson draws a parallel between these incidents and the Tacitus' account of Nerthus, suggesting that in addition a neck-ring wearing female figure "kneeling as if to drive a chariot" also dates from the Bronze Age. She posits that the evidence suggests that similar customs as detailed in Tacitus' account continued to exist during the close of the pagan period through worship of the Vanir.

While the connection between Nerthus and Njörðr is generally accepted, a few scholars have argued against it. Edgar Polomé argued that Njörðr and Nerthus come from different roots, adding that "Nerthus and Njörðr are two separate divine entities, whatever similarity their names show." Lotte Motz
Lotte Motz
Lotte Motz, born Lotte Edlis, was an Austrian-American scholar who published four books and many scholarly papers, primarily in the fields of Germanic mythology and folklore.-Life:-...
proposed that the Germanic goddess described by Tacitus may not have been called Nerthus at all, stating her opinion that Grimm selected the name Nerthus from among the manuscript readings precisely because it bore an etymological resemblance to Njörðr.