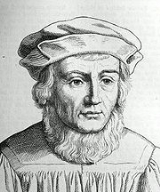 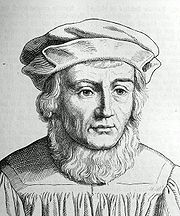 Johannes Aventinus was a Bavaria
Bavaria
Bavaria, formally the Free State of Bavaria is a state of Germany, located in the southeast of Germany. With an area of , it is the largest state by area, forming almost 20% of the total land area of Germany...
n historian and philologist. He wrote Annals of Bavaria, a valuable record of the early history of Germany. His real name was Johann Georg Turmair (or Thurmayr); Aventinus is the Latin name of his birthplace, Abensberg
Abensberg
Abensberg is a town in the Lower Bavarian district of Kelheim, in Bavaria, Germany, lying around 30 km southwest of Regensburg, 40 km east of Ingolstadt, 50 northwest of Landshut and 100 km north of Munich...
.

In 1517, William appointed him as Bavaria's official historian and commissioned him to write a history of the country. Many of the important authorities which Aventinus collected for this purpose have been preserved only in his copies. He embodied a critical treatment of them in a complete history of Bavaria, Annales Bojorum (Annals of Bavaria). His condensed German version of it, the Bayerische Chronik, is the first important history in the German language.

Aventinus remained a Catholic throughout his life, even though he sympathized with aspects of the Protestant reform. He was in communication with Philipp Melanchthon
Philipp Melanchthon
Philipp Melanchthon , born Philipp Schwartzerdt, was a German reformer, collaborator with Martin Luther, the first systematic theologian of the Protestant Reformation, intellectual leader of the Lutheran Reformation, and an influential designer of educational systems...
and Martin Luther
Martin Luther
Martin Luther was a German priest, professor of theology and iconic figure of the Protestant Reformation. He strongly disputed the claim that freedom from God's punishment for sin could be purchased with money. He confronted indulgence salesman Johann Tetzel with his Ninety-Five Theses in 1517...
. He rejected auricular confession, objected to pilgrimages and indulgences, and opposed the claims of the hierarchy as excessive. He showed a strong dislike for monks. On this account, he was imprisoned in 1528, but his friends soon effected his release. The remainder of his life was somewhat unsettled, and he died at Regensburg.

The Annals, which are in seven books, deal with the history of Bavaria in conjunction with general history from the earliest times to 1460, and the author shows sympathy for the Empire in its struggle with the Papacy. He took pains with his work, and to some degree anticipated the modern historiography. Another result of his nonconformity was that the Annals were not published until 1554. Many passages were omitted in this Ingolstadt edition, as they reflected on the Roman Catholics.

Ludwig I of Bavaria
Ludwig I of Bavaria
Ludwig I was a German king of Bavaria from 1825 until the 1848 revolutions in the German states.-Crown prince:...
had Aventinus' bust erected in the Walhalla temple
Walhalla temple
The Walhalla temple is a hall of fame that honors laudable and distinguished Germans, famous personalities in German history — politicians, sovereigns, scientists and artists of the German tongue". The hall is housed in a neo-classical building above the Danube River, east of Regensburg, in...
.
There is a German wheat beer
Aventinus (beer)
Aventinus is a strong, dark, wheat doppelbock made in Bavaria, Germany by the brewery company G. Schneider & Sohn.This beer was introduced in 1907 by Mathilde Schneider. This beer is named in honor of Johannes Aventinus, a Bavarian historian....
named after him, made by G. Schneider & Son.
The source of this article is wikipedia, the free encyclopedia.  The text of this article is licensed under the GFDL.