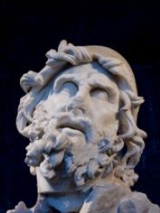 Odysseus or Ulysses (juː; ) was a legend
Legend
A legend is a narrative of human actions that are perceived both by teller and listeners to take place within human history and to possess certain qualities that give the tale verisimilitude...
ary Greek
Greeks
The Greeks, also known as the Hellenes , are a nation and ethnic group native to Greece, Cyprus and neighboring regions. They also form a significant diaspora, with Greek communities established around the world....
king of Ithaca and the hero of Homer
Homer
In the Western classical tradition Homer , is the author of the Iliad and the Odyssey, and is revered as the greatest ancient Greek epic poet. These epics lie at the beginning of the Western canon of literature, and have had an enormous influence on the history of literature.When he lived is...
's epic poem
Epic poetry
An epic is a lengthy narrative poem, ordinarily concerning a serious subject containing details of heroic deeds and events significant to a culture or nation. Oral poetry may qualify as an epic, and Albert Lord and Milman Parry have argued that classical epics were fundamentally an oral poetic form...
the Odyssey
Odyssey
The Odyssey is one of two major ancient Greek epic poems attributed to Homer. It is, in part, a sequel to the Iliad, the other work ascribed to Homer. The poem is fundamental to the modern Western canon, and is the second—the Iliad being the first—extant work of Western literature...
. Odysseus also plays a key role in Homer's Iliad
Iliad
The Iliad is an epic poem in dactylic hexameters, traditionally attributed to Homer. Set during the Trojan War, the ten-year siege of the city of Troy by a coalition of Greek states, it tells of the battles and events during the weeks of a quarrel between King Agamemnon and the warrior Achilles...
and other works in the Epic Cycle.

King of Ithaca, husband of Penelope
Penelope
In Homer's Odyssey, Penelope is the faithful wife of Odysseus, who keeps her suitors at bay in his long absence and is eventually reunited with him....
, father of Telemachus
Telemachus
Telemachus is a figure in Greek mythology, the son of Odysseus and Penelope, and a central character in Homer's Odyssey. The first four books in particular focus on Telemachus' journeys in search of news about his father, who has been away at war...
, and son of Laërtes
Laertes
In Greek mythology, Laërtes was the son of Arcesius and Chalcomedusa. He was the father of Odysseus and Ctimene by his wife Anticlea, daughter of the thief Autolycus. Laërtes was an Argonaut and participated in the hunt for the Calydonian Boar...
and Anticlea
Anticlea
In Greek mythology, Anticlea was the daughter of Autolycus and Amphithea and mother of Odysseus by Laërtes . She was also the granddaughter of the trickster god Hermes Tiresias. In the underworld, he encounters many spirits, including that of his mother, Anticlea...
, Odysseus is renowned for his guile and resourcefulness, and is hence known by the epithet
Epithet
An epithet or byname is a descriptive term accompanying or occurring in place of a name and having entered common usage. It has various shades of meaning when applied to seemingly real or fictitious people, divinities, objects, and binomial nomenclature. It is also a descriptive title...
Odysseus the Cunning (mētis, or "cunning intelligence
Intelligence
Intelligence has been defined in different ways, including the abilities for abstract thought, understanding, communication, reasoning, learning, planning, emotional intelligence and problem solving....
").

Examine Odysseus and Thersites in Book 2. Who is the hero and who is the coward. Why?
More

What place does Odysseus occupy in Western culture?

How did Greek and Roman perceptions of Odysseus vary and why?
More
x