The admirable distribution of the windows, the construction of the ceiling, and the fine entrance of the Vestibule can never be sufficiently extolled. Boldness and grace are equally conspicuous in the work as a whole, and in every part; in the cornices, corbels, the niches for statues, the commodious staircase, and its fanciful division-in all the building, as a word, which is so unlike the common fashion of treatment, that every one stands amazed at the sight thereof. – Giorgio Vasari.

The two-story Quattrocento cloister was to remain unchanged by the addition of the library. Because of this, certain features of Michelangelo’s plan such as the length and width were already laid out. Therefore walls were built on already pre-existing walls and cloisters. Because the walls were built on pre-existing walls, recessing the columns into the walls was a structural necessity. This also led to a unique style and pattern that Michelangelo takes advantage of.

The vestibule, also known as the ricetto, is 19.50 m. long, 20.30 m. wide, and 14.6 m. tall (31 by 34 by 44 feet). It was built above existing monastic quarters on the east range of the cloister, with an entrance from the upper level of the cloisters. Originally, Michelangelo had planned for a skylight but the Pope believed that it would cause the roof to leak so clerestory windows were incorporated into the west wall. Blank tapering windows framed in peitra serena, circumscribe the interior of the vestibule, separated by paired columns set into the wall.

Lit by windows in bays that are articulated by pilasters corresponding to the beams of the ceiling, with a tall constricted vestibule
Vestibule (architecture)
A vestibule is a lobby, entrance hall, or passage between the entrance and the interior of a building.The same term can apply to structures in modern or ancient roman architecture. In modern architecture vestibule typically refers to a small room or hall between an entrance and the interior of...
(executed to Michelangelo's design in 1559 by Bartolomeo Ammanati
Bartolomeo Ammanati
Bartolomeo Ammannati was an Italian architect and sculptor, born at Settignano, near Florence. He studied under Baccio Bandinelli and Jacopo Sansovino and closely imitated the style of Michelangelo.He was more distinguished in architecture than in sculpture...
) that is filled with a stair that flows down from the library itself, the Library is often instanced as a prototype of Mannerism
Mannerism
Mannerism is a period of European art that emerged from the later years of the Italian High Renaissance around 1520. It lasted until about 1580 in Italy, when a more Baroque style began to replace it, but Northern Mannerism continued into the early 17th century throughout much of Europe...
in architecture. 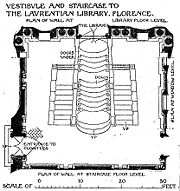 The plan of the stairs changed dramatically in the design stage. Originally in the first design in 1524, two flights of stairs were placed against the side walls and formed a bridge in front of the reading room door. A year later the stairway was moved to the middle of the vestibule. Tribolo attempted to carry out this plan in 1550 but nothing was built. Ammannati took on the challenge of interpreting Michelangelo’s ideas to the best of his ability using a small clay model, scanty material, and Michelangelo’s instructions.

The staircase leads up to the reading room and takes up half of the floor of the vestibule. The treads of the center flights are convex and vary in width, while the outer flights are straight. The three lowest steps of the central flight are wider and higher than the others, almost like concentric oval slabs. As the stairway descends, it divides into three flights.

The reading room is 46.20 m. long, 10.50 m. wide, and 8.4 m. high (152 by 35 by 28 feet). There are two blocks of seats separated by a center aisle with the backs of each serving as desks for the benches behind them. The desks are lit by the evenly spaced windows along the wall. The windows are framed by pilasters, forming a system of bays which articulate the layout of the ceiling and floor.

Because the reading room was built upon an existing story, Michelangelo had to reduce the weight of the reading-room walls. The system of frames and layers in the walls’ articulation reduced the volume and weight of the bays between the pilasters.

Beneath the current wooden floor of the library in the Reading Room is a series of 15 rectangular red and white terra cotta
Terra cotta
Terracotta, Terra cotta or Terra-cotta is a clay-based unglazed ceramic, although the term can also be applied to glazed ceramics where the fired body is porous and red in color...
floor panels. These panels, measuring 8 foot-6-inches (2.6 m) on a side, when viewed in sequence demonstrate basic principles of geometry
Geometry
Geometry arose as the field of knowledge dealing with spatial relationships. Geometry was one of the two fields of pre-modern mathematics, the other being the study of numbers ....
. It is believed that these tiles were arranged so as to be visible under the original furniture; but this furniture was later changed to increase the number of reading desks in the room.

In the ricetto, critics have noted that the recessing columns into the walls made the walls look like taut skin stretched between vertical supports. This caused the room to appear as if it mimics the human body, which at the time of the Italian Renaissance
Italian Renaissance
The Italian Renaissance began the opening phase of the Renaissance, a period of great cultural change and achievement in Europe that spanned the period from the end of the 13th century to about 1600, marking the transition between Medieval and Early Modern Europe...
was believed to be the ideal form. The columns of the building also appear to be supported on corbels so that the weight seems to be carried on weak elements. Because of the seemingly instability of the structure, the viewer cannot discern whether the roof is supported by the columns or the walls. This sense of ambiguity is heightened by the unorthodox forms of the tabernacle windows and of the architectural elements compressed together, creating a sense of tension and constrained energy.

The dynamic sculpture of the staircase appears to pour forth from the upper level like lava and compress the floor space of the vestibule. In the central flight, the convex treads vary in width which makes the entire arrangement disquieting.

In sharp contrast to the vestibule and staircase, the reading room’s evenly spaced windows set between pilasters in the side walls is amplified by natural light and gives it a serene, quiet, and restful appearance.

In 1571, Cosimo I, Grand Duke of Tuscany, opened the still-incomplete Library to scholars. Notable additions to the collection were made by its most famous librarian, Angelo Maria Bandini
Angelo Maria Bandini
Angelo Maria Bandini was an Italian author and librarian born in Florence.Having been left an orphan in his infancy, he was supported by his uncle, Giuseppe Bandini, a lawyer of some note. He received his education among the Jesuits, and showed a special inclination for the study of antiquities...
, who was appointed in 1757 and oversaw its printed catalogues. The Library conserves the Nahuatl
Nahuatl
Nahuatl is thought to mean "a good, clear sound" This language name has several spellings, among them náhuatl , Naoatl, Nauatl, Nahuatl, Nawatl. In a back formation from the name of the language, the ethnic group of Nahuatl speakers are called Nahua...
Florentine Codex
Florentine Codex
The Florentine Codex is the common name given to a 16th century ethnographic research project in Mesoamerica by Franciscan friar Bernardino de Sahagún. Bernardino originally titled it: La Historia General de las Cosas de Nueva Espana...
, the major source of pre-Conquest Aztec life. Among other well-known manuscripts in the Laurentian Library are the sixth-century Syriac Rabula Gospels
Rabula Gospels
The Rabbula Gospels, or Rabula Gospels, is a 6th century illuminated Syriac Gospel Book...
; the Codex Amiatinus
Codex Amiatinus
The Codex Amiatinus, designated by siglum A, is the earliest surviving manuscript of the nearly complete Bible in the Latin Vulgate version, and is considered to be the most accurate copy of St. Jerome's text. It is missing the Book of Baruch. It was produced in the Anglo-Saxon kingdom of...
, which contains the earliest surviving manuscript of the Latin Vulgate Bible
Vulgate
The Vulgate is a late 4th-century Latin translation of the Bible. It was largely the work of St. Jerome, who was commissioned by Pope Damasus I in 382 to make a revision of the old Latin translations...
; the Squarcialupi Codex
Squarcialupi Codex
The Squarcialupi Codex is an illuminated manuscript compiled in Florence, Italy in the early 15th century...
, an important early musical manuscript; and the fragmentary Erinna
Erinna
Erinna was a Greek poet, a contemporary and friend of Sappho, a native of Rhodes or the adjacent island of Telos or even possibly Tenos, who flourished about 600 BC...
papyrus containing poems of the friend of Sappho
Sappho
Sappho was an Ancient Greek poet, born on the island of Lesbos. Later Greeks included her in the list of nine lyric poets. Her birth was sometime between 630 and 612 BC, and it is said that she died around 570 BC, but little is known for certain about her life...
.