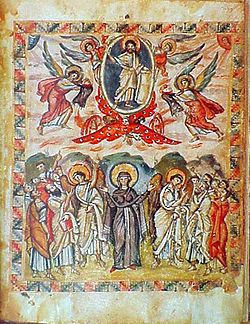 The Rabbula Gospels, or Rabula Gospels, (Florence, Biblioteca Mediceo Laurenziana, cod. Plut. I, 56) is a 6th century illuminated
Illuminated manuscript
An illuminated manuscript is a manuscript in which the text is supplemented by the addition of decoration, such as decorated initials, borders and miniature illustrations...
Syriac Gospel Book
Gospel Book
The Gospel Book, Evangelion, or Book of the Gospels is a codex or bound volume containing one or more of the four Gospels of the Christian New Testament...
. One of the finest Byzantine works produced in Asia
Asia
Asia is the world's largest and most populous continent, located primarily in the eastern and northern hemispheres. It covers 8.7% of the Earth's total surface area and with approximately 3.879 billion people, it hosts 60% of the world's current human population...
, and one of the earliest Christian manuscripts with large miniatures, it is distinguished by the miniaturist's predilection for bright colours, movement, drama, and expressionism
Expressionism
Expressionism was a modernist movement, initially in poetry and painting, originating in Germany at the beginning of the 20th century. Its typical trait is to present the world solely from a subjective perspective, distorting it radically for emotional effect in order to evoke moods or ideas...
.

The Gospel was completed in 586 at Monastery of St. John of Zagba (Syriac: , ), which, although traditionally thought to have been in Northern Mesopotamia, is now thought to have been in the hinterland between Antioch
Antioch
Antioch on the Orontes was an ancient city on the eastern side of the Orontes River. It is near the modern city of Antakya, Turkey.Founded near the end of the 4th century BC by Seleucus I Nicator, one of Alexander the Great's generals, Antioch eventually rivaled Alexandria as the chief city of the...
and Apamea
Apamea
Apamea or Apameia is the name of several Hellenistic cities in western Asia, after Apama, the wife of Seleucus I Nicator:*Apamea , on the Tigris near the Euphrates, precise location unknown, now in Iraq...
. It was signed by its scribe, Rabbula about whom nothing else is known. In their current condition the folios are 34 cm (13.4 in) by 27 cm (10.6 in). Their original size is unknown because they were trimmed during previous rebindings. The text is written in black or dark brown ink in two columns of a variable number of lines. There are footnotes written in red ink at the bottom of many of the columns. The text is the Peshitta
Peshitta
The Peshitta is the standard version of the Bible for churches in the Syriac tradition.The Old Testament of the Peshitta was translated into Syriac from the Hebrew, probably in the 2nd century AD...
version of the Syriac translation of the Gospels. 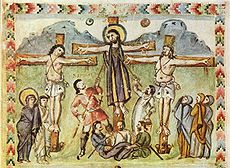 The manuscript is illuminated, with the text framed in elaborate floral and architectural motifs. The Gospel canons are set in arcade
Arcade (architecture)
An arcade is a succession of arches, each counterthrusting the next, supported by columns or piers or a covered walk enclosed by a line of such arches on one or both sides. In warmer or wet climates, exterior arcades provide shelter for pedestrians....
s ornamented with flowers and birds. The miniaturist obviously drew some of his inspiration from Hellenistic art (draped figures), but relied mainly on the ornamental traditions of Persia. The miniatures of the Rabbula Gospels, notably those representing the Crucifixion
Crucifixion
Crucifixion is an ancient method of painful execution in which the condemned person is tied or nailed to a large wooden cross and left to hang until dead...
, the Ascension and Pentecost
Pentecost
Pentecost is a prominent feast in the calendar of Ancient Israel celebrating the giving of the Law on Sinai, and also later in the Christian liturgical year commemorating the descent of the Holy Spirit upon the disciples of Christ after the Resurrection of Jesus...
, are real pictures with a decorative frame formed of zigzag
Zigzag
A zigzag is a pattern made up of small corners at variable angles, though constant within the zigzag, tracing a path between two parallel lines; it can be described as both jagged and fairly regular....
s, curve
Curve
In mathematics, a curve is, generally speaking, an object similar to a line but which is not required to be straight...
s, rainbow
Rainbow
A rainbow is an optical and meteorological phenomenon that causes a spectrum of light to appear in the sky when the Sun shines on to droplets of moisture in the Earth's atmosphere. It takes the form of a multicoloured arc...
s and so forth. The scene of the Crucifixion is the earliest to survive in an illuminated manuscript, and shows the Eastern form of the image at the time. There is a miniature of the Apostle
Apostle (Christian)
The term apostle is derived from Classical Greek ἀπόστολος , meaning one who is sent away, from στέλλω + από . The literal meaning in English is therefore an "emissary", from the Latin mitto + ex...
s choosing a new twelfth member (after the loss of Judas
Judas Iscariot
Judas Iscariot was, according to the New Testament, one of the twelve disciples of Jesus. He is best known for his betrayal of Jesus to the hands of the chief priests for 30 pieces of silver.-Etymology:...
); this is not an event found in the Canonical Gospels (though it is mentioned in Chapter 1 of Acts
ACTS
Acts or ACTS may refer to:Christianity* Acts of the Apostles , a genre of early Christian literature* Acts of the Apostles, the fifth book in the Bible's New Testament...
) and is almost never seen in later art. The artist was trained in the classical illusionist tradition, and is a competent and practiced hand rather than an outstanding talent; but surviving images from this period are so rare that his are extremely valuable for showing the style and iconography
Iconography
Iconography is the branch of art history which studies the identification, description, and the interpretation of the content of images. The word iconography literally means "image writing", and comes from the Greek "image" and "to write". A secondary meaning is the painting of icons in the...
of his age.

The French Orientalist Edgard Blochet (1870–1937) argued that some of the folios of the manuscript, including the pictorial series, were an interpolation no earlier than the 10th or 11th century. Since the original legend
Caption
Caption may refer to:*Caption , a small press and independent comic convention held annually in Oxford, England*Closed captioning, used to provide the text of a show's audio portion to those who may have trouble hearing it...
accompanying the miniatures is of the same paleographic character as the main text of the manuscript, this theory was rejected by Giuseppe Furlani and by Carlo Cecchelli in the commentary of the facsimile edition of the miniatures published in 1959.

The history of the manuscript after it was written is vague until the 11th century when it was at Maipuc. In the late 13th or early 14th century it came to Kanubin. In the late 15th or early 16th century, the manuscript was taken by the Maronite Patriarch to the Laurentian Library
Laurentian Library
The Laurentian Library is a historical library in Florence, Italy, containing a repository of more than 11,000 manuscripts and 4,500 early printed books...
in Florence
Florence
Florence is the capital city of the Italian region of Tuscany and of the province of Florence. It is the most populous city in Tuscany, with approximately 370,000 inhabitants, expanding to over 1.5 million in the metropolitan area....
, where it is today.


Overview of the illustrations 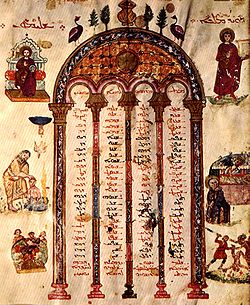