A vestibule is a lobby
Lobby (room)
A lobby is a room in a building which is used for entry from the outside. Sometimes referred to as a foyer or an entrance hall.Many office buildings, hotels and skyscrapers go to great lengths to decorate their lobbies to create the right impression....
, entrance hall
Hall
In architecture, a hall is fundamentally a relatively large space enclosed by a roof and walls. In the Iron Age, a mead hall was such a simple building and was the residence of a lord and his retainers...
, or passage between the entrance and the interior of a building
Building
In architecture, construction, engineering, real estate development and technology the word building may refer to one of the following:...
. 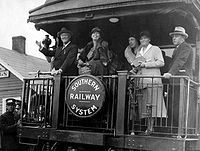 In contemporary usage, a vestibule constitutes an area surrounding the exterior door. It acts as an ante-chamber between the exterior and the interior structure. Often it connects the doorway to a lobby or hallway. It is the space one occupies once inside the door, but not yet into the main interior of the building.

Although vestibules are common in private residences as a modified mud room, they are especially prevalent in buildings designed to elicit a sense of Much grandeur, such as government buildings. The residence of the White House
White House
The White House is the official residence and principal workplace of the president of the United States. Located at 1600 Pennsylvania Avenue NW in Washington, D.C., the house was designed by Irish-born James Hoban, and built between 1792 and 1800 of white-painted Aquia sandstone in the Neoclassical...
in the United States is just such an example. It contains a vestibule between the entrance at the North portico
Portico
A portico is a porch leading to the entrance of a building, or extended as a colonnade, with a roof structure over a walkway, supported by columns or enclosed by walls...
and the main interior hall. Many government buildings mimic the classical architecture
Classical architecture
Classical architecture is a mode of architecture employing vocabulary derived in part from the Greek and Roman architecture of classical antiquity, enriched by classicizing architectural practice in Europe since the Renaissance...
from which the vestibule originates.

A purely utilitarian use of vestibules in modern buildings is to create an "air lock" entry. Such vestibules consist of merely a set of inner doors and a set of outer doors. The intent of such vestibules is to reduce air infiltration to the building by having only one set of doors open at any given time. This can reduce heating and air conditioning loads.

The vestibule on a railroad passenger car is an enclosed area at the end of the carbody, usually separated from the main part of the interior by a door, which is power-operated on most modern equipment. Entrance to and exit from the car is through the side doors, which lead into the vestibule. When passenger cars are coupled, their vestibules are joined by mating faceplate and diaphragm assemblies to create a weather-tight seal for the safety and comfort of passengers who are stepping from car to car. In British usage the term refers to the part of the carriage where the passenger doors are located; this can be at the ends of the carriage (on long-distance stock) or at the 1/4 and 3/4 of length positions (typical on modern suburban stock).

Vestibules were common in ancient Greek
Ancient Greece
Ancient Greece is a civilization belonging to a period of Greek history that lasted from the Archaic period of the 8th to 6th centuries BC to the end of antiquity. Immediately following this period was the beginning of the Early Middle Ages and the Byzantine era. Included in Ancient Greece is the...
temples. Due to the construction techniques available at the time, it was not possible to build large spans. Consequently many entrance ways had two rows of columns that supported the roof and created a distinct space around the entrance.

In ancient Roman architecture, the origin of the term, a vestibule was a space between the interior of a building and the street. The structure was a mixture between a modern hall
Hall
In architecture, a hall is fundamentally a relatively large space enclosed by a roof and walls. In the Iron Age, a mead hall was such a simple building and was the residence of a lord and his retainers...
and porch
Porch
A porch is external to the walls of the main building proper, but may be enclosed by screen, latticework, broad windows, or other light frame walls extending from the main structure.There are various styles of porches, all of which depend on the architectural tradition of its location...
. Upon entering a Roman house or domus
Domus
In ancient Rome, the domus was the type of house occupied by the upper classes and some wealthy freedmen during the Republican and Imperial eras. They could be found in almost all the major cities throughout the Roman territories...
, one would have to pass through the vestibule before entering the atrium
Atrium (architecture)
In modern architecture, an atrium is a large open space, often several stories high and having a glazed roof and/or large windows, often situated within a larger multistory building and often located immediately beyond the main entrance doors...
.