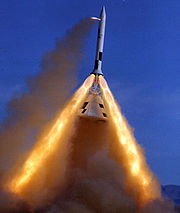 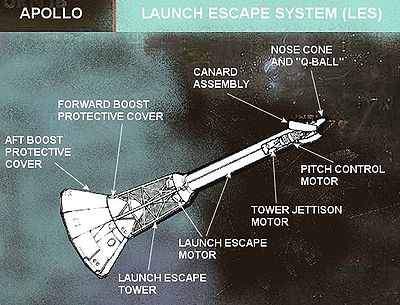 A Launch Escape System is a top-mounted rocket
Rocket
A rocket is a missile, spacecraft, aircraft or other vehicle which obtains thrust from a rocket engine. In all rockets, the exhaust is formed entirely from propellants carried within the rocket before use. Rocket engines work by action and reaction...
connected to the crew module of a crewed spacecraft and used to quickly separate the crew module from the rest of the rocket in case of emergency. Since the escape rockets are above the crew module, an LES typically uses separate nozzles which are angled away from the crew module. The LES is designed for use in situations where there is an imminent threat to the crew, such as an impending explosion.

Historically, LESes were used on American Mercury
Project Mercury
In January 1960 NASA awarded Western Electric Company a contract for the Mercury tracking network. The value of the contract was over $33 million. Also in January, McDonnell delivered the first production-type Mercury spacecraft, less than a year after award of the formal contract. On February 12,...
and Apollo
Project Apollo
The Apollo program was the spaceflight effort carried out by the United States' National Aeronautics and Space Administration , that landed the first humans on Earth's Moon. Conceived during the Presidency of Dwight D. Eisenhower, Apollo began in earnest after President John F...
spacecraft. Both designs used a solid-fuel rocket motor. The Mercury LES was built by the Grand Central Rocket Company in Redlands, California
Redlands, California
Redlands is a city in San Bernardino County, California, United States. As of the 2010 census, the city had a population of 68,747, up from 63,591 at the 2000 census. The city is located east of downtown San Bernardino.- History :...
(which later became the Lockheed Propulsion Company
Lockheed Propulsion Company
The Lockheed Propulsion Company was a division of the Lockheed Aircraft Corporation located in the Mentone, California area northeast of Redlands, California, adjacent to the Santa Ana River, from 1961 to 1975...
). Apollo used a design that had many similarities to the Mercury system. Launch Escape Systems continue to be used on the Russian Soyuz
Soyuz programme
The Soyuz programme is a human spaceflight programme that was initiated by the Soviet Union in the early 1960s, originally part of a Moon landing project intended to put a Soviet cosmonaut on the Moon...
and Chinese Shenzhou programme spacecraft. The Dragon spacecraft uses a liquid fueled launch abort system integrated to the capsule to minimize spacecraft costs.

The Russian Vostok and American Gemini
Project Gemini
Project Gemini was the second human spaceflight program of NASA, the civilian space agency of the United States government. Project Gemini was conducted between projects Mercury and Apollo, with ten manned flights occurring in 1965 and 1966....
spacecraft both made use of ejection seats. The European Space Agency
European Space Agency
The European Space Agency , established in 1975, is an intergovernmental organisation dedicated to the exploration of space, currently with 18 member states...
's Hermes
Hermes (shuttle)
Hermes was a proposed spaceplane designed by the French Centre National d'Études Spatiales in 1975, and later by the European Space Agency. It was superficially similar to the US X-20. France proposed in January 1985 to go through with Hermes development under the auspices of the ESA. Hermes was...
and the Russian Buran
Shuttle Buran
The Buran spacecraft , GRAU index 11F35 K1 was a Russian orbital vehicle analogous in function and design to the US Space Shuttle and developed by Chief Designer Gleb Lozino-Lozinskiy of Energia rocket corporation...
space shuttles would also have made use of them if they had ever flown with crews. As shown by Soyuz T-10a
Soyuz T-10-1
-Mission parameters:*Mass: 6850 kg*Perigee: N/A*Apogee: N/A*Inclination: N/A*Period: N/A-Mission highlights:...
, an LES must be able to carry a crew compartment from the launch pad to a height sufficient for its parachutes to open. Consequently, they must make use of large, powerful (and heavy) solid rocket
Solid rocket
A solid rocket or a solid-fuel rocket is a rocket engine that uses solid propellants . The earliest rockets were solid-fuel rockets powered by gunpowder; they were used by the Chinese in warfare as early as the 13th century and later by the Mongols, Arabs, and Indians.All rockets used some form of...
s.

The Space Shuttle
Space Shuttle
The Space Shuttle was a manned orbital rocket and spacecraft system operated by NASA on 135 missions from 1981 to 2011. The system combined rocket launch, orbital spacecraft, and re-entry spaceplane with modular add-ons...
was initially fitted with ejection seats for the initial "shakedown" flights, but these were removed once the vehicle was deemed operational. Following the Challenger
Space Shuttle Challenger
Space Shuttle Challenger was NASA's second Space Shuttle orbiter to be put into service, Columbia having been the first. The shuttle was built by Rockwell International's Space Transportation Systems Division in Downey, California...
disaster
STS-51-L
STS-51-L was the twenty-fifth flight of the American Space Shuttle program, which marked the first time an ordinary civilian, schoolteacher Christa McAuliffe, had flown aboard the Space Shuttle. The mission used Space Shuttle Challenger, which lifted off from the Launch Complex 39-B on 28 January...
, all surviving orbiters were fitted to allow for crew evacuation through the main hatch, though this can only be used when the shuttle is in a controlled glide (the crew would have had to reach the exit from their seats and jump out, to then return to earth via parachute).

The Multi-Purpose Crew Vehicle
Multi-Purpose Crew Vehicle
The Orion Multi-Purpose Crew Vehicle is a planned spacecraft that is being built by Lockheed Martin for NASA, the space agency of the United States, based on designs and tests already completed for the Orion spacecraft. The MPCV was announced by NASA on May 24, 2011...
being developed to follow the shuttle program will use a Mercury and Apollo-style escape rocket system, while an alternative system, called the Max Launch Abort System
Max Launch Abort System
The Max Launch Abort System is a proposed alternative to the Max Faget-invented "tractor" Launch Escape System currently planned for use by NASA for its Orion spacecraft in the event an Ares I malfunction during launch requires an immediate abort.A "pad abort" flight test of the MLAS was...
(MLAS), has been floated to use existing solid-rocket motors integrated into the bullet-shaped protective launch shroud.

Also under NASA's CCDev program, Space X was awarded $75 million for the development of their own version of a 'pusher' LAS.

The first fully operational test flight of an LES was Apollo mission A-004
A-004
A-004 was the sixth and final test of the Apollo launch escape vehicle and the first flight of a Block I production-type spacecraft.-Objectives:...
on January 20, 1966. The mission used a Little Joe II
Little Joe II
Little Joe II was an American space launch vehicle used for five unmanned tests of the launch escape system and to verify the performance of the command module parachutes for the Apollo spacecraft from 1963–66...
booster, carrying an early version of the Apollo Command/Service Module
Apollo Command/Service Module
The Command/Service Module was one of two spacecraft, along with the Lunar Module, used for the United States Apollo program which landed astronauts on the Moon. It was built for NASA by North American Aviation...
. 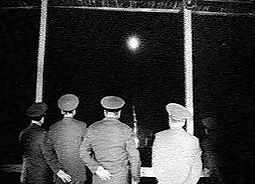 Only one emergency use of an LES has occurred. This occurred during the attempt to launch Soyuz T-10-1
Soyuz T-10-1
-Mission parameters:*Mass: 6850 kg*Perigee: N/A*Apogee: N/A*Inclination: N/A*Period: N/A-Mission highlights:...
on September 26, 1983. The rocket caught fire, just before launch, but the LES was able to carry the crew capsule clear, seconds before the rocket exploded. The crew were subjected to an acceleration of 14 to 17 g
G-force
The g-force associated with an object is its acceleration relative to free-fall. This acceleration experienced by an object is due to the vector sum of non-gravitational forces acting on an object free to move. The accelerations that are not produced by gravity are termed proper accelerations, and...
(140 to 170 m/s²) for five seconds. Reportedly, the capsule reached an altitude of 2,000 meters (6,500 ft) and landed 4 kilometers (2.5 mi) from the launch pad. On the Soyuz, the grid fin
Grid fin
Grid fins are a type of flight control surface used on missiles and bombs in place of more conventional control surfaces, such as planar fins...
s also deploy on the payload fairing to stabilize the craft.

A previous launch accident occurred during the flight of Soyuz 18a
Soyuz 18a
Soyuz 18a was a manned Soyuz spacecraft launched by the Soviet Union in 1975, intended to dock with the orbiting Salyut 4 space station, but which failed to achieve orbit due to a serious malfunction during launch...
on April 5, 1975. However in this case, the incident took place at high altitude, after the LES of the Soyuz had been discarded. The spacecraft automatically separated from the malfunctioning rocket and completed a successful re-entry.