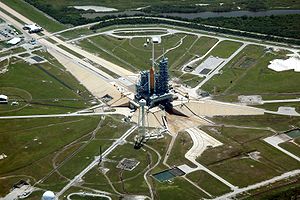 A launch pad is the area and facilities where rockets or spacecraft lift off. A spaceport
Spaceport
A spaceport or cosmodrome is a site for launching spacecraft, by analogy with seaport for ships or airport for aircraft. The word spaceport, and even more so cosmodrome, has traditionally been used for sites capable of launching spacecraft into orbit around Earth or on interplanetary trajectories...
(or rocket launch site) can contain one or many launch pads. A typical launch pad consists of the service and umbilical structures. The service structure provides an access platform to inspect the launch vehicle prior to launch. Most service structures can be moved or rotated to a safe distance. The umbilical structure has propellent loading, gas, power, and communication links to the launch vehicle. The launch vehicle sits atop of the launch platform, which has the flame deflection structure to withstand the intense heat and load generated by rocket engines during liftoff.

Most cryogenic launch vehicles need to be continuously topped off as scheduled liftoff approaches. This is particularly necessary as various holds are placed on the liftoff and then removed as support personnel correct problems or verify they are not serious. Without the ability to top off the launch vehicle, the launch would have to be scrubbed when problems slowed down the countdown
Countdown
A countdown is a sequence of counting backward to indicate the seconds, days, or other time units remaining before an event occurs or a deadline expires. Typical events for which a countdown is used include the launch of a rocket or spacecraft, the detonation of a bomb, the start of a race, and the...
. Gantries are commonly designed and constructed on launch pads to meet these types of servicing requirements both during launch and in the preparation period leading up to it.

Most rocket
Rocket
A rocket is a missile, spacecraft, aircraft or other vehicle which obtains thrust from a rocket engine. In all rockets, the exhaust is formed entirely from propellants carried within the rocket before use. Rocket engines work by action and reaction...
s need stable support for a few seconds after ignition while the engines ramp up and stabilize at full thrust
Thrust
Thrust is a reaction force described quantitatively by Newton's second and third laws. When a system expels or accelerates mass in one direction the accelerated mass will cause a force of equal magnitude but opposite direction on that system....
. This stability requirement is commonly met by the use of explosive bolts to connect the launch vehicle to the pad. When the vehicle is stable and ready to fly the bolts explode, severing the vehicle's ties to the launch pad and structures on the ground.


Transport of rockets to the pad

There are several different types of launch site, determined by the means by which the rocket gets to the pad.