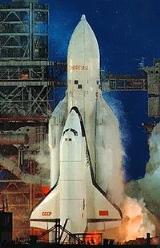 
The Buran spacecraft , GRAU
Grau
Grau is a German word meaning "gray" and a Catalan word meaning "grade". It may refer to:* BAP Almirante Grau , a De Zeven Provinciën class cruiser in service with the Peruvian Navy* Grau Käse, Tyrolean grey cheese...
index 11F35 K1 was a Russian (Soviet) orbital vehicle (in Russian terminology: "орбитальный самолет", "orbital airplane") analogous in function and design to the US Space Shuttle
Space Shuttle
The Space Shuttle was a manned orbital rocket and spacecraft system operated by NASA on 135 missions from 1981 to 2011. The system combined rocket launch, orbital spacecraft, and re-entry spaceplane with modular add-ons...
and developed by Chief Designer Gleb Lozino-Lozinskiy
Gleb Lozino-Lozinskiy
Gleb Evgeniyevich Lozino-Lozinskiy , December 25, 1909 – November 28, 2001) was a Russian and Ukrainian engineer, General Director and General Designer of the JSC NPO Molniya, lead developer of the Russian Spiral and Shuttle Buran programme, Doctor of Science, Hero of Socialist Labour, laureate of...
of Energia rocket corporation. To this day, Buran remains the only space shuttle vehicle from the Soviet Buran program that was launched into space before the program closure. The Buran completed one unmanned spaceflight in 1988. The program was cancelled in 1993. In 2002, the Buran was destroyed when the hangar in which it was stored, at the Baikonur cosmodrome
Baikonur Cosmodrome
The Baikonur Cosmodrome , also called Tyuratam, is the world's first and largest operational space launch facility. It is located in the desert steppe of Kazakhstan, about east of the Aral Sea, north of the Syr Darya river, near Tyuratam railway station, at 90 meters above sea level...
, collapsed.

The Buran orbital vehicle program was developed in response to the U.S. Space Shuttle program, which in the 1980s raised considerable concerns among the Soviet military and especially Defense Minister Dmitriy Ustinov
Dmitriy Ustinov
Dmitriy Feodorovich Ustinov was Minister of Defense of the Soviet Union from 1976 until his death.-Early life:Dimitry Feodorovich Ustinov was born in a working-class family in Samara. During the civil war, when hunger became intolerable, his sick father went to Samarkand, leaving Dimitry as head...
. An authoritative biographer of the Russian space program, academic Boris Chertok
Boris Chertok
Boris Evseyevich Chertok is a prominent Soviet and Russian rocket designer, responsible for control systems of a number of ballistic missiles and spacecraft. Author of a four-volume book Rockets and People, the definitive source of information about the history of the Soviet space program.-Books...
recounts how the program came into being.
According to Chertok, after the U.S. developed its Space Shuttle program
Space Shuttle program
NASA's Space Shuttle program, officially called Space Transportation System , was the United States government's manned launch vehicle program from 1981 to 2011...
, the Soviet military became suspicious that it could be used for military purposes, due to its enormous payload, several times that of previous U.S. spaceships. The Soviet government asked the Russian TsNIIMash
TsNIIMash
TsNIIMash is an initialism for the Central Research Institute of Machine Building , which is the institute of the Russian aeronautics and space agency and specializes in the development of long range ballistic missiles, air defense missiles, and propulsion units for defense sectors...
(ЦНИИМАШ, Central Institute of Machine-building, a major player in defense analysis) for an expert opinion. Institute director, Yuri Mozzhorin, recalls that for a long time the institute could not envisage a civilian payload large enough to require a vehicle of that capacity. Based on this, as well as on US profitability analyses of that time, which showed that the Space Shuttle would be economically efficient only with a large number of launches (one every week or so), Mozzhorin concluded that the vehicle had a military purpose, although he was unable to say exactly what. The Soviet program was further boosted after Defense Minister Ustinov received a report from analysts showing that, at least in theory, the Space Shuttle could be used to deploy nuclear bombs over Soviet territory. Chertok recounts that Ustinov was so worried by the possibility that he made the Soviet response program a top priority.

Officially, the Buran spacecraft was designed for the delivery to orbit and return to Earth of spacecraft, cosmonauts, and supplies. Both Chertok and Gleb Lozino-Lozinskiy
Gleb Lozino-Lozinskiy
Gleb Evgeniyevich Lozino-Lozinskiy , December 25, 1909 – November 28, 2001) was a Russian and Ukrainian engineer, General Director and General Designer of the JSC NPO Molniya, lead developer of the Russian Spiral and Shuttle Buran programme, Doctor of Science, Hero of Socialist Labour, laureate of...
suggest that from the beginning, the program was military in nature; however, the exact military capabilities, or intended capabilities, of the Buran program remain classified. Commenting on the discontinuation of the program in his interview to New Scientist
New Scientist
New Scientist is a weekly non-peer-reviewed English-language international science magazine, which since 1996 has also run a website, covering recent developments in science and technology for a general audience. Founded in 1956, it is published by Reed Business Information Ltd, a subsidiary of...
, Russian cosmonaut Oleg Kotov
Oleg Kotov
Oleg Valeriyevich Kotov was born October 27, 1965, in Simferopol, Crimean oblast in Ukrainian SSR. After a career as a military pilot, he joined the Russian cosmonaut corps. He has flown two long duration spaceflight on the International Space Station logging just short of a year in space...
confirms their accounts:
Like its American counterpart, the Buran, when in transit from its landing sites back to the launch complex, was transported on the back of a large jet aeroplane - the Antonov An-225
Antonov An-225
The Antonov An-225 Mriya is a strategic airlift cargo aircraft, designed by the Antonov Design Bureau in the 1980s. It is the world's heaviest aircraft. The design, built in order to transport the Buran orbiter, was an enlargement of the successful An-124 Ruslan...
Mriya transport aircraft, which was designed in part for this task and remains the largest aircraft in the world to fly multiple times.

The only orbital launch of Buran occurred at 3:00 UTC
Coordinated Universal Time
Coordinated Universal Time is the primary time standard by which the world regulates clocks and time. It is one of several closely related successors to Greenwich Mean Time. Computer servers, online services and other entities that rely on having a universally accepted time use UTC for that purpose...
on 15 November 1988 from Baikonur Cosmodrome
Baikonur Cosmodrome
The Baikonur Cosmodrome , also called Tyuratam, is the world's first and largest operational space launch facility. It is located in the desert steppe of Kazakhstan, about east of the Aral Sea, north of the Syr Darya river, near Tyuratam railway station, at 90 meters above sea level...
Site 110/37. It was lifted into orbit unmanned by the specially designed Energia
Energia
Energia was a Soviet rocket that was designed by NPO Energia to serve as a heavy-lift expendable launch system as well as a booster for the Buran spacecraft. Control system main developer enterprise was the NPO "Electropribor"...
rocket, which to this day remains the heaviest rocket running on liquid fuel. Unlike the Space Shuttle, which is propelled by a combination of solid boosters and the Shuttle's own liquid-fuel engines fueled from a large fuel tank, the Energia-Buran system used only thrust from the rocket's four RD liquid-fuel engines developed by Valentin Glushko. From the very beginning Buran was intended to be used in both fully automatic and manual mode. Although the program accumulated a several-years delay, Buran remained the only space shuttle to ever perform an unmanned flight in fully automatic mode until 22 April 2010 when the US Air Force launched its Boeing X-37
Boeing X-37
The Boeing X-37 is an American unmanned vertical-takeoff, horizontal-landing spaceplane. The X-37 is operated by the United States Air Force for orbital spaceflight missions intended to demonstrate reusable space technologies...
spaceplane. The automated launch sequence performed as specified, and the Energia rocket lifted the vehicle into a temporary orbit before the orbiter separated as programmed. After boosting itself to a higher orbit and completing two revolutions around the Earth, ODU (engine control system) engines fired automatically to begin the descent into the atmosphere. Exactly 206 minutes into the mission, the Buran orbiter landed, having lost only five of its 38,000 thermal tiles over the course of the flight. The automated landing took place on a runway at Baikonur Cosmodrome where, despite a lateral wind speed of 61.2 kilometres per hour (38 mph), it landed only 3 metres (9.8 ft) laterally and 10 metres (32.8 ft) longitudinally from the target mark. The unmanned flight was the first time that a spacecraft of this size and complexity had been launched, completed maneuvers in orbit, re-entered the atmosphere, and landed under automatic guidance.

In 1989, it was projected that Buran would have an unmanned second flight in 1993, with a duration of 15–20 days. Due to the cancellation of the project after the dissolution of the Soviet Union
Dissolution of the Soviet Union
The dissolution of the Soviet Union was the disintegration of the federal political structures and central government of the Union of Soviet Socialist Republics , resulting in the independence of all fifteen republics of the Soviet Union between March 11, 1990 and December 25, 1991...
, this never took place. Several scientists looked into trying to revive the Buran program, especially after the Space Shuttle Columbia disaster
Space Shuttle Columbia disaster
The Space Shuttle Columbia disaster occurred on February 1, 2003, when shortly before it was scheduled to conclude its 28th mission, STS-107, the Space Shuttle Columbia disintegrated over Texas and Louisiana during re-entry into the Earth's atmosphere, resulting in the death of all seven crew members...
. More recently, the director of Moscow's Central Machine Building Institute has said the Buran project will be reviewed in the hopes of restarting a similar manned spacecraft design, with rocket test launches as soon as 2015. Russia also continues work on the PPTS
Prospective Piloted Transport System
PPTS , unofficially called Rus, is a project being undertaken by the Russian Federal Space Agency to develop a new-generation manned spacecraft...
but has abandoned the Kliper
Kliper
Kliper is a partly reusable manned spacecraft, proposed by RSC Energia.Designed primarily to replace the Soyuz spacecraft, Kliper has been proposed in two versions: as a pure lifting body design and as spaceplane with small wings...
program, due to differences in vision with its European partners.

On 12 May 2002, a hangar
Hangar
A hangar is a closed structure to hold aircraft or spacecraft in protective storage. Most hangars are built of metal, but other materials such as wood and concrete are also sometimes used...
housing Buran in Kazakhstan
Kazakhstan
Kazakhstan , officially the Republic of Kazakhstan, is a transcontinental country in Central Asia and Eastern Europe. Ranked as the ninth largest country in the world, it is also the world's largest landlocked country; its territory of is greater than Western Europe...
collapsed, due to poor maintenance. The collapse killed eight workers and destroyed the orbiter as well as a mock-up of an Energia carrier rocket.