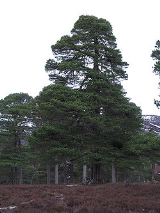 Encyclopedia
Pinaceae are trees or shrubs, including many of the well-known conifers of commercial importance such as cedars, fir
Fir
Firs are a genus of 48–55 species of evergreen conifers in the family Pinaceae. They are found through much of North and Central America, Europe, Asia, and North Africa, occurring in mountains over most of the range...
s, hemlock
Tsuga
Tsuga is a genus of conifers in the family Pinaceae. The common name hemlock is derived from a perceived similarity in the smell of its crushed foliage to that of the unrelated plant poison hemlock....
s, larch
Larch
Larches are conifers in the genus Larix, in the family Pinaceae. Growing from 15 to 50m tall, they are native to much of the cooler temperate northern hemisphere, on lowlands in the north and high on mountains further south...
es, pine
Pine
Pines are trees in the genus Pinus ,in the family Pinaceae. They make up the monotypic subfamily Pinoideae. There are about 115 species of pine, although different authorities accept between 105 and 125 species.-Etymology:...
s and spruce
Spruce
A spruce is a tree of the genus Picea , a genus of about 35 species of coniferous evergreen trees in the Family Pinaceae, found in the northern temperate and boreal regions of the earth. Spruces are large trees, from tall when mature, and can be distinguished by their whorled branches and conical...
s. The family is included in the order Pinales
Pinales
The Order Pinales in the Division Pinophyta, Class Pinopsida comprises all the extant conifers. This order was formerly known as the Coniferales....
, formerly known as Coniferales. Pinaceae are supported as monophyletic by its protein-type sieve cell plastids, pattern of proembryogeny, and lack of bioflavonoids. They are the largest extant conifer family in species diversity, with between 220-250 species (depending on taxonomic
Taxonomy
Taxonomy is the science of identifying and naming species, and arranging them into a classification. The field of taxonomy, sometimes referred to as "biological taxonomy", revolves around the description and use of taxonomic units, known as taxa...
opinion) in 11 genera, and the second-largest (after Cupressaceae
Cupressaceae
The Cupressaceae or cypress family is a conifer family with worldwide distribution. The family includes 27 to 30 genera , which include the junipers and redwoods, with about 130-140 species in total. They are monoecious, subdioecious or dioecious trees and shrubs from 1-116 m tall...
) in geographical range, found in most of the Northern Hemisphere
Northern Hemisphere
The Northern Hemisphere is the half of a planet that is north of its equator—the word hemisphere literally means “half sphere”. It is also that half of the celestial sphere north of the celestial equator...
with the majority of the species in temperate climates but ranging from sub arctic to tropical. The family often forms the dominant component of boreal, coastal and montane forests. One species just crosses the equator
Equator
An equator is the intersection of a sphere's surface with the plane perpendicular to the sphere's axis of rotation and containing the sphere's center of mass....
in southeast Asia. Major centres of diversity are found in the mountains of southwest China
China
Chinese civilization may refer to:* China for more general discussion of the country.* Chinese culture* Greater China, the transnational community of ethnic Chinese.* History of China* Sinosphere, the area historically affected by Chinese culture...
, Mexico
Mexico
The United Mexican States , commonly known as Mexico , is a federal constitutional republic in North America. It is bordered on the north by the United States; on the south and west by the Pacific Ocean; on the southeast by Guatemala, Belize, and the Caribbean Sea; and on the east by the Gulf of...
, central Japan
Japan
Japan is an island nation in East Asia. Located in the Pacific Ocean, it lies to the east of the Sea of Japan, China, North Korea, South Korea and Russia, stretching from the Sea of Okhotsk in the north to the East China Sea and Taiwan in the south...
and California
California
California is a state located on the West Coast of the United States. It is by far the most populous U.S. state, and the third-largest by land area...
.

They are tree
Tree
A tree is a perennial woody plant. It is most often defined as a woody plant that has many secondary branches supported clear of the ground on a single main stem or trunk with clear apical dominance. A minimum height specification at maturity is cited by some authors, varying from 3 m to...
s (rarely shrub
Shrub
A shrub or bush is distinguished from a tree by its multiple stems and shorter height, usually under 5–6 m tall. A large number of plants may become either shrubs or trees, depending on the growing conditions they experience...
s) growing from 2 to 100 m tall, mostly evergreen
Evergreen
In botany, an evergreen plant is a plant that has leaves in all seasons. This contrasts with deciduous plants, which completely lose their foliage during the winter or dry season.There are many different kinds of evergreen plants, both trees and shrubs...
(except Larix and Pseudolarix, deciduous
Deciduous
Deciduous means "falling off at maturity" or "tending to fall off", and is typically used in reference to trees or shrubs that lose their leaves seasonally, and to the shedding of other plant structures such as petals after flowering or fruit when ripe...
), resinous, monoecious, with subopposite or whorled branches, and spirally arranged, linear (needle-like) leaves. The female cones
Conifer cone
A cone is an organ on plants in the division Pinophyta that contains the reproductive structures. The familiar woody cone is the female cone, which produces seeds. The male cones, which produce pollen, are usually herbaceous and much less conspicuous even at full maturity...
are large and usually woody, 2-60 cm long, with numerous spirally-arranged scales, and two winged seed
Seed
A seed is a small embryonic plant enclosed in a covering called the seed coat, usually with some stored food. It is the product of the ripened ovule of gymnosperm and angiosperm plants which occurs after fertilization and some growth within the mother plant...
s on each scale. The male cones are small, 0.5-6 cm long, and fall soon after pollination; pollen dispersal is by wind
Wind
Wind is the flow of gases on a large scale. On Earth, wind consists of the bulk movement of air. In outer space, solar wind is the movement of gases or charged particles from the sun through space, while planetary wind is the outgassing of light chemical elements from a planet's atmosphere into space...
. Seed dispersal is mostly by wind, but some species have large seeds with reduced wings, and are dispersed by bird
Bird
Birds are feathered, winged, bipedal, endothermic , egg-laying, vertebrate animals. Around 10,000 living species and 188 families makes them the most speciose class of tetrapod vertebrates. They inhabit ecosystems across the globe, from the Arctic to the Antarctic. Extant birds range in size from...
s. Analysis of Pinaceae cones reveals how selective pressure has shaped the evolution of variable cone size and function throughout the family. Variation in cone size in the family has likely resulted from the variation of seed dispersal mechanisms available in the environment over time. All Pinaceae with seeds weighing less than 90mg, are seemingly adapted for wind dispersal. Pines having seeds larger than 100mg are more likely to have benefited from adaptations that promote animal dispersal, particularly by birds. Pinaceae that persist in areas where tree squirrels are abundant do not seem to have evolved adaptations for bird dispersal. The embryos of Pinaceae are multi-cotyledonous, with 3-24 cotyledon
Cotyledon
A cotyledon , is a significant part of the embryo within the seed of a plant. Upon germination, the cotyledon may become the embryonic first leaves of a seedling. The number of cotyledons present is one characteristic used by botanists to classify the flowering plants...
s.

Boreal conifers have many adaptions for winter. The narrow conical shape of northern conifers, and their downward-drooping limbs help them shed snow, many of them seasonally alter their biochemistry to make them more resistant to freezing, called "hardening".

Classification of the subfamilies and genera of Pinaceae has been subject to debate in the past. Pinaceae ecology, morphology and history have all been used as the basis for methods of analyses of the family. An 1891 publication divided the family into two subfamiles, using the number and position of resin canals in the primary vascular region of the young taproot as the primary consideration. In a 1910 publication, the family was divided into two tribes based on the occurrence and type of long-short shoot dimorphism. A more recent classification divided the subfamilies and genera based on the consideration of features of ovulate cone anatomy among extant and fossil members of the family. Below is an example of the how morphology has been used to classify Pinaceae.
The 11 genera are divided into four subfamilies, based on the cone, seed and leaf morphology: